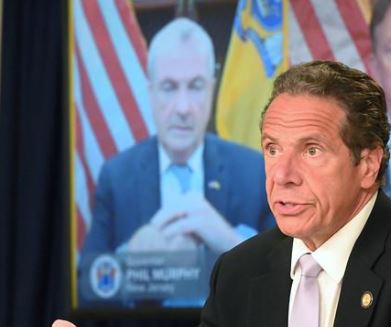 “In New York State, our decisions are based on science and data and we are encouraged by the continued decline in infection and hospitalization rates,” Governor Cuomo said. “In partnership with the State of New Jersey, we are expanding our indoor dining openings in New York City to 50 percent. We will continue to follow the science and react accordingly. If we keep the infections down and vaccinations up, we will continue to stay ahead in the footrace against this invisible enemy and reach the light at the end of the tunnel together.”

New Jersey Governor Phil Murphy said, “In New Jersey, we will continue to move deliberately, responsibly and incrementally, guided by public health data. We feel confident in this step given the improving metrics we have seen over the last several weeks in both New Jersey and New York City, as well as the continued ramp up of our vaccination program. Our states will continue to work together to protect the health of as many residents as possible.”

NYC Hospitality Alliance also welcomed the news. “While city restaurants may not increase occupancy to 75% like restaurants are safely doing throughout the rest of the state, it is still welcome news to the battered restaurant industry,” said Andrew Rigie, executive director of the Alliance.

“Cautiously and safely increasing indoor dining capacity at New York City restaurants to 50 percent, with an eye toward expanding in the future, more vaccinations, and dedicated restaurant relief on its way from the federal government gives our industry some optimism among all the doom and gloom of this past year.”

The capacity increases are part of both state’s continued efforts to jump start their post-COVID recovery and reinvigorate the economy.

Since New York City indoor dining was reopened on February 12, two COVID-19 incubation periods have passed without any significant rise in infection and hospitalization rates.

The expanded capacity is subject to strict guidance and State officials will continue to reevaluate the data. New Jersey last expanded indoor dining on February 5. During that time, the number of hospitalizations in the state has dropped by over 1,000 and has remained consistent.