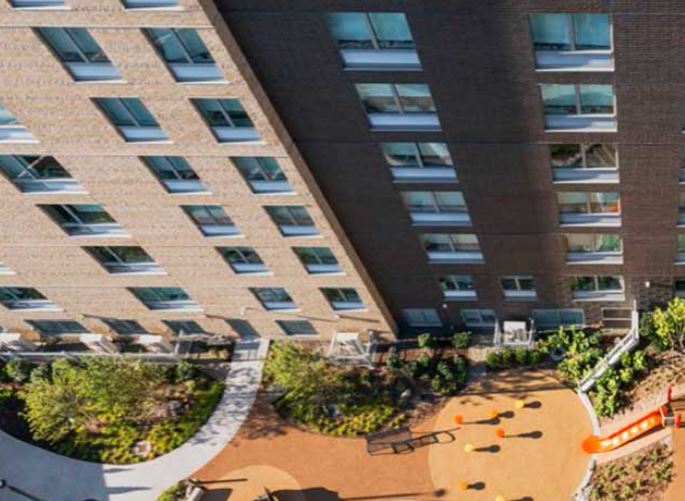 In the fall of 2012, Superstorm Sandy slammed into New York City, leaving a trail of devastation in its wake. Elected officials and policy makers responded by promising far-reaching efforts to shore up our aging and inadequate infrastructure in the face of a looming climate crisis.

Ten years later, the city was again blindsided by a double whammy of storms that broke rainfall records, caused deadly floods, overwhelmed the public transit system, and demonstrated that despite its widespread destruction, we have not yet learned Sandy’s lessons.

Speaking in Queens after touring a flood-damaged neighborhood, President Joe Biden issued a clear call to action, saying that climate change has created a “red alert situation” in which extreme weather is now the rule rather than exception. There is no more time for additional wake-up calls. We must act now by infusing efforts to combat climate change into every aspect of public policy – including affordable housing.

In her first few weeks as governor, Kathy Hochul has demonstrated that she is serious about addressing New York’s worsening affordable housing crisis, and understands the growing urgency to increase the state’s already aggressive plans to combat climate change.

Hochul recently joined fellow governors in calling for action on Biden’s infrastructure bill, which includes incentives to accelerate private investment in clean energy, building retrofits and more. She followed that with an announcement of a $24 million pilot program to reduce carbon emissions and improve energy performance at affordable housing developments in New York City.

The program will upgrade more than 1,200 units and replace fossil fuel-based heating and cooling systems with energy-efficient heat pumps. This is a good step forward. But a much broader effort is necessary, as the affordable housing industry operates on razor-thin margins to provide sub-market rents, putting innovative and climate-saving technologies out of reach without government subsidies.

Addressing our built environment is a critical component of the battle against climate change. According to the Urban Green Council, nearly 70 percent of carbon emissions in New York City are generated by existing buildings, the vast majority of which will still be standing in 2050.

But this is not just a city problem: the construction and ongoing operations of buildings account for 40 percent of all energy consumption across the nation. Communities everywhere need to step up and take action to solve the crisis – and Governor Hochul can lead the way.

She can start by creating a dedicated $50 million fund for sustainable affordable housing construction and retrofitting. In this manner, New York can stimulate technological innovation and improve outcomes for low- and middle-income residents living in affordable housing now. It is a true win-win.

Energy efficient features are better for the environment, but also tangibly improve living conditions for residents in affordable units and their broader communities. Low-income and minority communities disproportionately feel the effects of air pollution, leading to long term negative impacts health and wellness.

It will also help their wallets. The U.S. Department of Energy found the use of green design, such as heat pumps, can help decrease the cost of energy consumption for tenants as well as operational costs for landlords. Lowering the financial burden on individuals and families enables them to spend more on necessities such as food, education, medical care, and transportation, while lowering overhead for landlords frees up funds for upgrades and repairs.

We are moving in the right direction, but we cannot do so alone – and we must accelerate our forward momentum. The industry needs the help and support of New York State now to fully embrace its role in helping to make the Empire State as affordable and sustainable as it can possibly be – for everyone who calls it home.

Jolie Milstein is the president and CEO of the New York State Association for Affordable Housing.