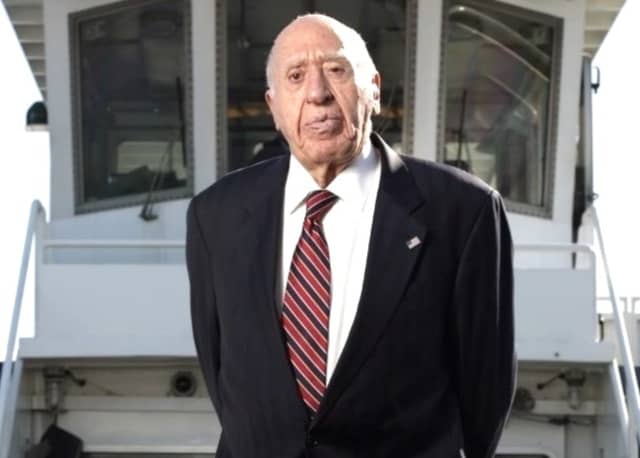 Mr Imperator died on November 18 at the age of 95 following a long illness.

He founded NY Waterway in 1986 in Weehawken, New Jersey and built it into a mass transit system which has transported almost 300 million people to date.

The town’s Mayor Richard Turner, recalled,  “Everybody forgets in the early 80s, the mid-80s, when he started the ferry system, that the land was vacant, there was nothing down here, not even a decent road, and Arthur was an entrepreneur, and he put all he could into believing that a modern ferry system, NY Waterway system, would work, and it helped open up the waterfront.”

NY Waterway ferries have become a vital component in the Metropolitan Area’s mass transit network and a life-saving backup system when other transit modes are disrupted. Ferry crews evacuated 150,000 people from Manhattan on 9/11 and have rescued hundreds of people from area waters, including 143 people from Flight 1547, the Miracle on the Hudson, the most successful marine rescue in aviation history.

Despite skeptics who derided his vision as “Arthur’s Folly,” Imperatore drew from his nearly 40 years of experience in the industry to pioneer a ferry-bus network, leading to the company’s resounding success.

With his stepson, Armand Pohan, Imperatore ran the company until his death.

It was Imperatore’s dream to revitalize his native New Jersey community and NY Waterway did just that. Starting with the company’s Port Imperial terminus in Weehawken, Imperatore led the development of a thriving residential and commercial community.

As his vessels transported passengers to and from New York City, his fleet of buses made the ferry service accessible to the surrounding towns. In this way, the ferry-bus network became the infrastructure that supported waterfront development from Edgewater to Jersey City (the New Jersey “Gold Coast”) boosting both local and state economies.

To this day, the ferry-bus network is the international model for effective, coordinated mass transportation systems.

Born on July 8, 1925 to Italian fruit grocer Eugene Imperatore and his wife Teresa (née Sorrentino) in West New York, New Jersey, Imperatore was the ninth of ten children living in a two-bedroom apartment above his father’s grocery. He began earning a wage at age five, and by age eight had set a goal of earning 10 cents per week to help support his family.

Starting as a delivery boy for his father’s grocery, Imperatore also worked as a Western Union messenger and shoeshine boy. His strong work ethic and entrepreneurial drive continued to propel him forward.

He served in the U.S. Army Air Corps as a navigator on B-24 Liberators and B-29 Superfortresses during WWII. After the war in 1947, he and his brothers started A-P-A Transport Corp. with two surplus army trucks and grew to become the fourth largest interstate freight trucking company in the US.

Mr Imperatore was widely regarded for his responsible corporate citizenship, family values, and love for country. His support and engagement in charitable causes included medical research, social services and education.

Throughout his life, he was honored by business and civic organizations for his corporate and humanitarian contributions. Among his awards were three honorary doctoral degrees, the prestigious Horatio Alger Award, and the first U.S. Senate Productivity Award, presented to him by former New Jersey Senator Bill Bradley.

Never one to rest on his laurels, Mr Imperatore contemplated the possibilities of what he might yet achieve during his 2017 induction into the New Jersey Hall of Fame, saying “I talk to God every once in a while. I tell him ‘listen, God, I know you might have your eye on me – however, I still have a lot of work to do.’”

A memorial service will be planned for a future date. In lieu of flowers, contributions would be appreciated to the foundations of his two closest physicians, Dr. Valentin Fuster and Dr. David Adams, who worked tirelessly to provide him with quality years of life.