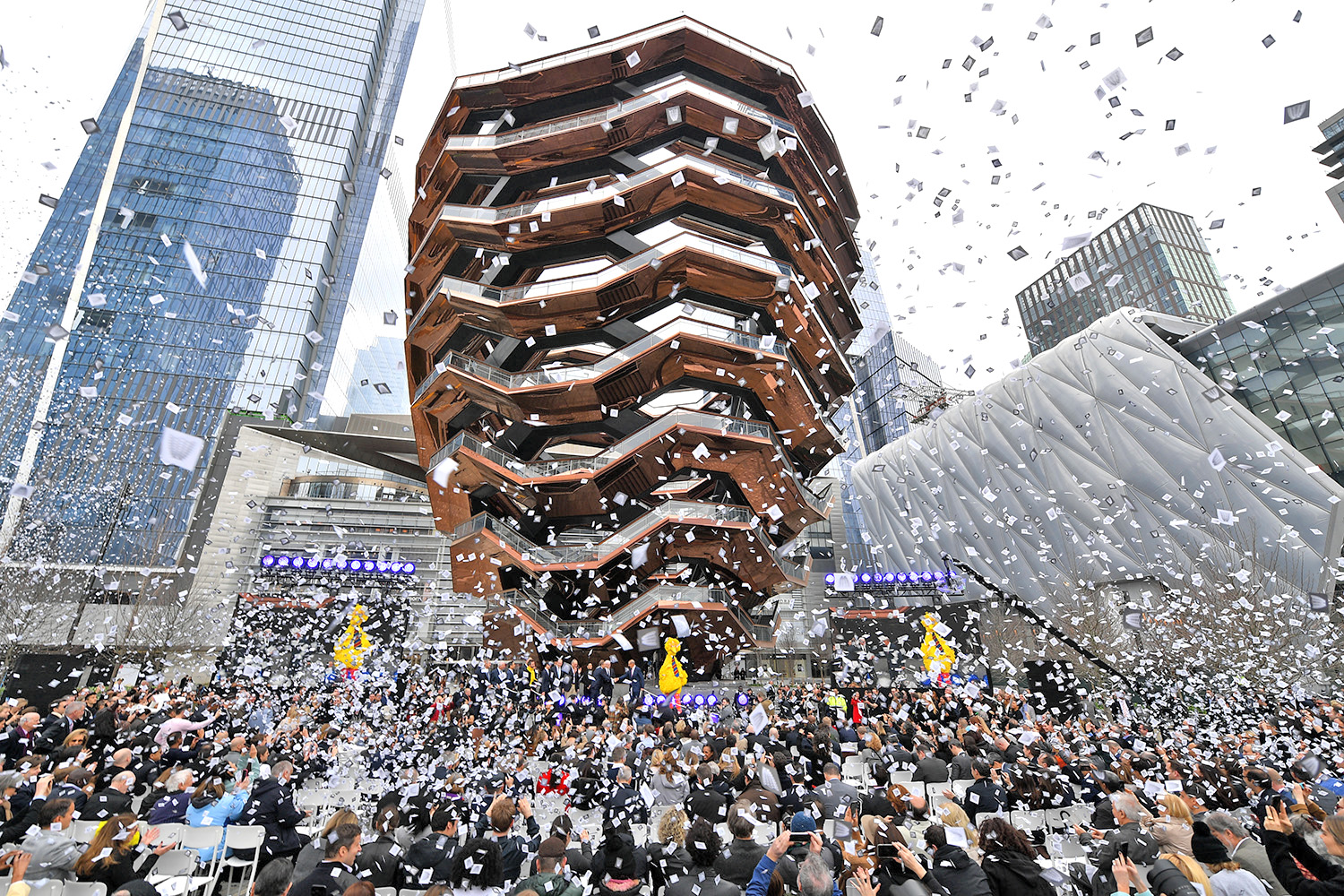 Related Companies and Oxford Properties Group gave their Hudson Yards a New York opening last week, with a celebrity showcase in The Shops Thursday night and a star-studded ceremony on Friday.

$25 billion and five years after construction began on the largest private real estate development in the US, thousands turned out to help the developers celebrate what is being hailed as a transformative new neighborhood.

Related chairman Stephen M. Ross said, “Building Hudson Yards is the most humbling experience of my lifetime. It’s a rare opportunity to be able to create a neighborhood of this size and impact, let alone in New York City. Hudson Yards’ economic impact is already profound and its place on the New York skyline is meaningful.

“Bringing this vision to life took incredible forethought and commitment from the public sector, and a world-class team and set of partners in the private sector, many of whom signed on to bring their businesses to our budding community when it was still just an open railyard. This new neighborhood represents more than just a set of buildings, it shows what can be achieved when the public and private sectors join together to unleash passion and creativity.

“Our ambition for Hudson Yards was to create a great neighborhood, with experiences and opportunities for everyone. I am confident that we have achieved this with great public spaces, shopping and culinary expressions across all spectrums, cultural attractions, diverse residential opportunities and cutting-edge sustainability and resiliency. We are thrilled to now welcome every New Yorker, indeed the world, to visit New York’s newest neighborhood, Hudson Yards.”

U.S. Senator Charles E. Schumer, said, “There are three main reasons why I have long supported developing the vast underused space on Manhattan’s far West Side — and connecting it to all else via the extension of the 7 train: jobs, jobs, jobs. Jobs for New Yorkers in every borough, and at every rung of the economic ladder. New York is a bold, future-focused city. And the work done here by Steve Ross, Related, the City, the building trades unions, the MTA and others will contribute to the economic energy, optimism and vitality that will keep New York growing and creating — and at the forefront of global cities — for a long time to come.”

And Governor Andrew Cuomo added, “The development of Hudson Yards has transformed the West Side of Manhattan, creating jobs and economic opportunity for New Yorkers. With the building of a new Pennsylvania Station-Moynihan Farley complex, we are going to connect this emerging neighborhood to a world-class 21st century transportation hub. Today marks our continued commitment toward building an even more sustainable City and region, and we are proud to be creating a stronger future for our state.‎”

After months of often acrimonious disputes over wages and conditions, Gary LaBarbera, president of the Building and Construction Trades Council of Greater New York, had nothing but praise for the developers.

“The milestone we are celebrating today would not have been possible without the vision of Steve Ross and Related, as well as the hard work and dedication of the men and women of the building and construction trades. A world-class development project like Hudson Yards deserved only the best and most skilled workforce and we are proud to say it was built by union hands. We look forward to the future of Hudson Yards and will continue to collaborate with Related and Oxford on this ambitious project and many others across New York in the years ahead.”

New York’s retail brokers were out in force, too. Chase Welles, partner at SCG Retail, visited The Shops all weekend “and they were busier on each successive day,” he said.

Welles disagreed with those who have called the mall a luxury enclave, noting, “If you look at the customers, it is a mixed crowd. You have H&M, Zara, Shake Shack, Citarella. On opening night, it was Chanel and Uniqlo that were doing best business. I hate the haters on this thing. Most retail professionals and tenants agree this is a terrific attraction. It has good access to transit and it is on the Highline, and the combination of those factors combined with the related experiences will attract international and regional customers.

“As far as the public is concerned, they are happy to see that much capital being pumped into what was a disused area,” Welles added. “Its going to be a cleanup force for that whole 8th Avenue area with a big new Wholefoods going into the Brookfield project on 10th Avenue and I am excited to see the residential density grow between 11th and 12th Avenues. That will tie into the new buildings on 42nd Street and create a new neighborhood that will evolve around Hudson Yards.”

RKF’s Ariel Schuster agreed. “I think The Shops at Hudson Yards are going to be very successful. It is part of a huge project, a new city. The Shops are incredible and, as a New Yorker, I will be going there with my wife and kids.”

Steve Rappaport, a veteran retail broker with Sinvin, however, believes the jury is still out on the mall at least.
“Hopefully, it will be positive, but I believe they missed an opportunity that spoke to all the smaller vendors that make New York so vibrant – any one of the dozens of new shops and new Asian restaurants that are so popular and magnetic downtown. They gave a lot of incentives to the food vendors, restaurants and retailers to come to Hudson Yards – they could have put a few dollars aside to support some promising entrepreneurs, but instead they decided to do more of the same old same old.”

The developers have called Hudson yards a model for the 21st-century urban experience.

Planned as the first LEED certified neighborhood, Hudson Yards is home to a first-of-it-kind microgrid and two co-generation plants that will save 24,000 MT of CO2e greenhouse gases from being emitted annually by generating electricity and hot and chilled water for the neighborhood.

Nearly 10 million gallons of storm water will be collected from building roofs and public plazas, then filtered and reused in mechanical and irrigation systems.

The development Also provides for over 1,300 new or permanently preserved affordable units onsite and in the neighborhood, 14 acres of public space and a new K-8 public school.

Related Companies and Oxford Properties Group will also have their headquarters there and 50 Hudson Yards will be home to BlackRock’s world headquarters.

It will also pay almost $100 million per year in tax revenue that will be available for debt service on the bonds issued for the No. 7 Subway line extension.

Once fully developed, Hudson Yards will contribute nearly $19 billion annually to New York City’s Gross Domestic Product (GDP), and nearly $1 billion annually in State and City taxes. The companies and buildings at Hudson Yards will bring over 57,000 jobs to the new West Side neighborhood and Hudson Yards also estimates that, over the next six months, upwards of 600 new jobs will be filled by the developers and management team to provide essential services at the development, most of whom will be represented by SEIU 32BJ, plus thousands of additional jobs at restaurants and other campus businesses.

The developers created the Hudson Yards Hiring Network to identify and recruit talent from New York’s most in-need populations. The initiative has already placed hundreds of New Yorkers in new jobs and expects hundreds of more jobs to be filled over the next few months.

Savills drops the Studley from its name