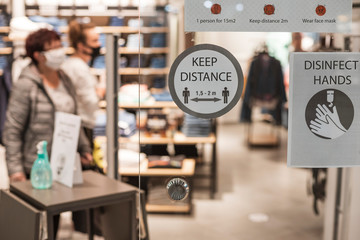 A former executive director at Cushman & Wakefield, Singer has been credited with over $2.5 billion in deals during his 13-year career.

“As retail continues to evolve, so does retail real estate,” said Singer. “Streetscapes and shopping corridors in major cities around the world are dealing with vast changes at an ever-increasing pace. Retail has changed drastically, and brick and mortar retail must continue to change with it. “

Called Retail by MONA, Singer said his new firm aims to be the vanguard of the renaissance in retail in New York City.

“MONA is an acronym for Making of a New Age,” said Singer. “While Retail by MONA operates with an entrepreneurial approach, we have prominent institutional backing and will build on our vast experience to advise and assist companies and brands to achieve success in an increasingly disrupted and reshaped retail landscape. We bring a new paradigm to approaching brick and mortar retail.”

As well as Rosen and Fuchs, strategic partners and investors in the new firm include prominent retail tenants and property owners. Singer will serve as CEO and founder of Retail by MONA. Michael Cody, also formerly of Cushman & Wakefield, will serve as director and co-founder of the new entity.

Singer is launching his firm at a time when New York City’s retail sector is reeling from the effects of the coronavirus pandemic.

In the second quarter, the number of direct, ground-floor availabilities experienced a new peak of 235 spaces along Manhattan’s prime 16 retail corridors, according to CBRE’s Q2 report.

Average asking rents declined for the 11th consecutive quarter, with the average corridors dropping to $688 psf, an 11.3 percent year-over-year decline and 3.6 percent drop from the prior quarter. This marks the first time the figure has dropped below $700 psf since 2011.

“The ongoing repricing of trophy properties was a significant factor in the declining average of asking rents,” said Nicole LaRusso, Director of Research & Analysis for CBRE’s Tri-State region.

“With an increasing amount of retail vacancy along the high-street corridors and the introduction of new, heavily discounted availabilities, average asking rents will likely continue to decline throughout the rest of the year.”