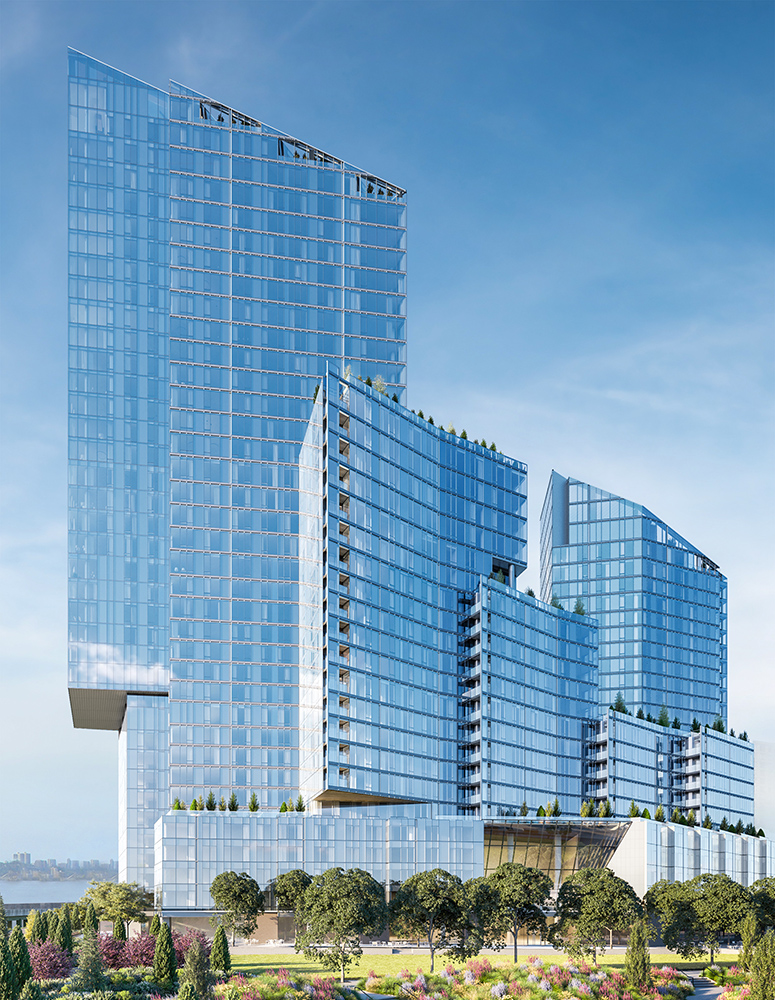 Having secured one of the largest residential construction loans in 2016 for $1.243 billion, GID Development Group has already paid off the entire condominium portion of the financing package for Waterline Square, totaling $585 million. Funding was originally provided by a bank syndicate led by Wells Fargo as Administrative Agent, along with co-lead arrangers HSBC, National Bank of Abu Dhabi, and JP Morgan.

Since launching sales in 2017, the development has achieved the highest price psf ever achieved on Riverside Boulevard and the sale of Penthouse A at Two Waterline Square, priced at $18 million.

Parkview Apartments includes two 89-foot buildings that will each rise seven stories over two floors of parking. The towers, which break ground this week and will complete construction by the end of 2021, will overlook Berry Lane Park, with reflective glass that returns light to the areas below.
The complex will include 170 units (65 one-bedroom, 95 two-bedroom and 10 three-bedroom). Parkview Apartments will also include 18 units of moderate-incoming housing.

The residential buildings at 87-99 Van Horne Street and 72-78 Woodward Street are a vision of developer Wallabout Realty Holdings.

Dresdner Robin, which has led the permitting process since 2017, worked with the Jersey City Planning Board to create one contiguous tract of land, allowing for a unified, larger-scale development. A new road will connect the dead ends of Woodward Street and Van Horne Street, improving circulation and access in the area. A new streetscape will complement the roadway and pedestrian connectivity will be provided for the nearby Garfield Avenue Hudson-Bergen Light Rail Station.

To address active underground utilities which bisected the proposed site, Dresdner Robin worked alongside the city’s Engineering Department and Municipal Utilities Authority (JCMUA) to create a multi-phase design that relocated the active utilities around the site and accommodated the building’s new connections.

Closings have kicked off at The Fitzroy, a collaboration by celebrated design team Roman and Williams, JDS Development Group and Largo. A three-bedroom, 3-bath residence spanning 2,338 s/f closed for $6.4 million – one of the highest price psf condo sales in West Chelsea.

Only a few residences remain including a Roman and Williams-furnished two bedroom and home office – the last available – asking $5,295,000, as well as a full floor residence on the 8th floor with four bedrooms, 5.5 baths and two outdoor terraces asking $21 million.

The 14 homes range from two to four-bedrooms and in price from $5,925,000 to $24 million. Clad in green terracotta with copper-framed windows, The Fitzroy’s prewar aesthetic extends to its interiors, which feature Smallbone of Devizes kitchens by Roman and Williams, black enameled Lacanche range with brass details, copper fixtures throughout, and custom lighting.
Amenities include a 24-hour attended lobby, a La Palestra designed fitness center, a wine cellar with secure lockers, a landscaped rooftop, children’s art studio, bike storage, and a climate-controlled storage room.

The Weingarten Group has opened a sales gallery at Prior’s Pointe, its new 16-unit condominium development, in Downtown Jersey City’s Village West neighborhood.
Exclusively marketed by Irina Barnaby and Daniel Pelosi with Weichert, Realtors, buyers also now have the opportunity to walk through the homes on hardhat tours, to see the actual spaces.
Prior’s Pointe is comprised of two-bedroom, 2-bath homes with floor plans ranging from 1,100 to more than 1,300 s/f. Homes have sound-absorbing glazed glass windows, central air and heat are controlled with a Nest thermostat, and every unit has laundry appliances, including a vented gas dryer.
Residences at Prior’s Pointe start at $799,000, with some units offering views of Mary Benson Park. Garage parking is available for purchase, and is pre-wired for electric vehicles.

Silverback Development has has partnered with Toll Brothers for the development of 733-777 Summer Street in Stamford, CT. The new joint venture will oversee development of a $112 million, nearly 400-unit residential rental property located in the heart of downtown Stamford.
Since acquiring the property in 2016, Silverback Development has worked closely with city officials to establish future plans for the site, converting the land use from office to residential. Previously a 92,000 s/f, 2.75-acre office complex, the site will now be developed as a 373-unit multifamily rental property offering amenities, on-site parking and 4,300 s/f of retail at its base. The existing office buildings have since been demolished and construction. The new building will feature five floors of residences.
The property is also located within an Opportunity Zone.

Have you heard… ‘Dexter’ penthouses on the market