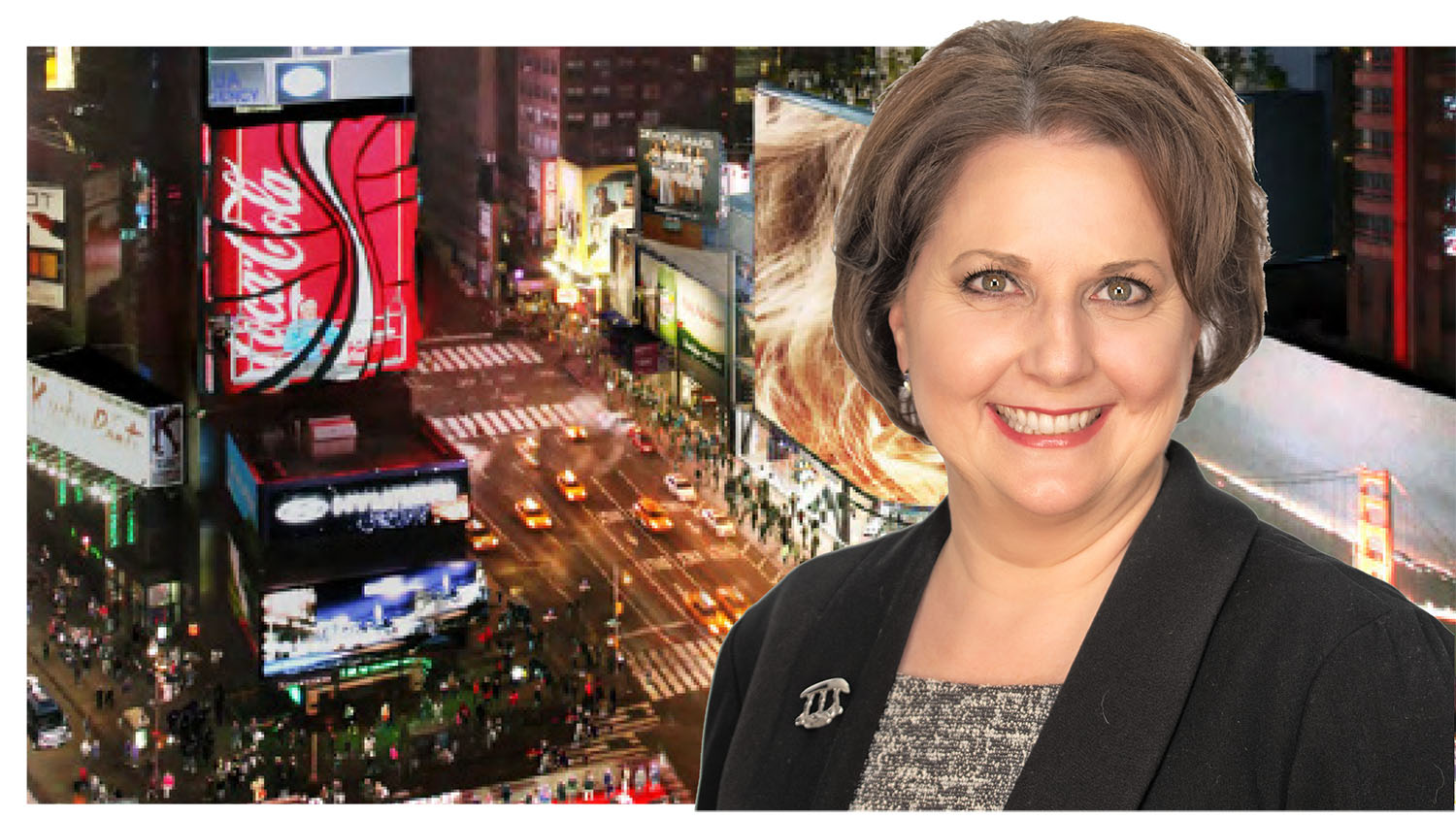 When the French banking giant Natixis signed off on a $1.9 billion loan for Maefield Development’s 20 Times Square development last year, it was Cate Agnew’s digging that helped cement the deal.

As executive director and head of real estate valuation for the French banking giant’s New York office, Agnew’s fingerprints are on pretty much every one of the $18 billion in loans it transacts every year in the US.

She was tapped to launch the valuation group in 2017, a move that allowed the bank to independently appraise loan applications while adhering to the compliance regulations surrounding the business. “I created the policies and procedures around valuation in support of the lending that we do here in commercial real estate,” said Agnew, who actually employs her talents across the transaction, from consulting with Natixis’ lending line deal teams on upcoming projects, to vetting appraisers, reviewing their calculations and, ultimately, approving and documenting the transaction.

“It’s a remarkable privilege being part of the team that is behind deals like 20 Times Square,” said Agnew.

Her prowess in the deal making process has earned Agnew a place among the industry’s Women of Influence as a Counselor of Real Estate, one of the most respected real estate specialists in the sector, and membership on a slew of boards, including RICS Finance Committee, the Audit Committee of CCIM and the International Ethics Standards Coalition, among others.

Which is why it’s hard to fathom how she started out as a geologist.

“I enjoyed being out in the field and the analytical nature of producing results,” said Agnew of her early years at William & Mary working towards her Bachelors in Geology. When she graduated and set out for San Francisco on the hunt for a job in her field, “there were no jobs to be had for love nor money and I had to rethink what I was going to do,” she recalled.
Ironically, she saw a lot of similarities between digging around in the dirt of the natural landscape and the bricks and mortar of real estate.

“Commercial real estate appealed to my sense of going out in the field, looking at what’s out there, gathering your data, analyzing and concluding.
“I knew to succeed I had to be credentialed because I wasn’t coming out of business school, and so I went and got my MAI (Member of the Appraisal Institute) designation.”

It was the start of what Agnew calls a lifelong learning curve that saw her build a resume of accomplishments that ultimately led the Philadelphia native to the very pinnacle of the appraisal craft. “People like to grab a label and they don’t like to let it go,” she said of her serendipitous journey. “My label has marginally stayed the same, and even though everything I have done has been very different, it has all been done using the same basic tools.”

Armed with her MAI, she got her first job at a Minneapolis appraisal firm and found her terra firma. When she landed at US Bank as chief appraiser, she started classed at the University of Minnesota and got her MBA in Finance.

That took her to a large financial firm in Massachusetts and then TIAA CREF in New York as associate director of real estate. After a stint with Washington Mutual in the multi-family residential analysis and lending sector as a Fannie Mae delegated underwriting and servicing specialist, she found herself at the Diocese of Brooklyn and Queens, of all places.

“I was staying with valuation, but shifting roles each time,” Agnew explained. “Every time I moved, I gained a new skill set to ultimately learn the whole investment landscape from top to bottom.”

She recalls her church real estate role with fondness. “It was an extraordinary experience. They had never had anyone look at their real estate as an asset to be deployed before, they just saw it as chunks of property.

“Brooklyn and Queens were both founded by immigrants and the complexion of the Catholic church reflected that. It was structured so that each parish owned its own stuff — schools, rectories, convents. As they were beginning to close down, what the church needed to do with their real estate became problematic. I flipped their model, which had been that parishes supported their own buildings, and said let’s have buildings support the parish. If these buildings are not being used, let’s find another use — rent it or sell it so it’s giving money back.”

Agnew said she viewed her job with the diocese as one of “changing the thinking,” and she put the practices and procedures in place that would take the church into the new millennium fiscally sound and strategically placed to realize capital gains from its assets for the next 40 years.

“It was hard to leave. I had created something I was very proud of,” she recalled, but the highly regulated world of financial reporting beckoned and her next stop was Atlanta, GA, where Ernst & Young hired her as valuation manager.

In charge of national financial reporting and audit assistance, she was transferred to Florida, where she first encountered the Royal Institution of Chartered Surveyors, or RICS. Despite a stately moniker void of the type of mass appeal favored by Americans, the British institution was intent on a membership push that included education of the colonists and was holding a conference in Miami.

Agnew recalled, “I had been doing a lot of international work with a previous employer and I was constantly going to RICS for data and people to talk to about some of the markets I was working in. So, I went to the conference and, once I started realizing the kind of qualifications that were required to be part of it and what they had to offer both in the US and abroad, I began to explore the idea of joining as a Fellow.

“I was very intrigued by the inroads they were making. They had a phenomenal business plan and it filled a need in the US that was unfilled. The need was for a designation that bridged the world between how the US views real estate and filled in with how the rest of the world views real estate. There is a certain parochialism to the US view of real estate and all its complexities. Instead of looking at it through one lens, RICS embraces every aspect.”

She found there was a whole lot more to RICS than a guy standing near a road with a tripod and a staff. “Members are involved in every aspect of the industry, from permitting, to land use, to urban planning, engineers, cost pricing, project management. They don’t have to be a surveyor — there isn’t such a position here — but regardless of their profession, each RICS member is held to the same high standard.

“I have always believed everyone needs to refresh their knowledge base throughout their career and RICS gave me the opportunity to do that. I dug in and became as active as I could.”

As a member of the international institute’s finance board, Agnew is one of a key group that handles RICS finances and investments. With its own property portfolio — including a headquarters building in London’s Westminster Square — and a significant amount of interest in financial investments, the board is tasked with making RICS money work for members in a “thoughtful and prudent way” while the organization strives to advance the professions of its members.

Calling the designation “the benchmark of our industry,” Agnew said, “When you are a member RICS, you are held to a very high level of professionalism and violations carry serious consequences. It protects the entire membership by ensuring each member is held to the same high standard. It also provides education, government outreach and strong information and metrics on the built environment in an accessible way.”
She said her RICS membership brought her into a vast network of accomplished experts and enriched the experiences she has with other organizations, such as CREW (Commercial Real Estate Women, which she co-founded in New York and Minneapolis) CCIM (Certified Commercial Investment Member) and the Appraisal Institute.

“My membership brought me not only a new skill set, but new relationships, and it was after joining RICS that I was invited to become a Counselor of Real Estate. I was very honored. It was the result of 15 years of a career moving forward and it was wonderful to have that acknowledgment. What I have drawn from RICS pushed me forward to that next level.”

That next level was leading the real estate advisory, valuation division of PwC in Manhattan. “I had been recruited to E&Y and when a friend of mine began a new practice at PwC, he recruited me. Both were great experiences. I am a fan of lifelong learning and each job brought me a different understanding that taught me how to do new things. I got to work on enormous deals on a daily basis, from international mergers and acquisitions to landmark valuations.”

In 2015, Agnew joined Deutsch Bank as team leader of its Americas valuation division and, from there, she was recruited by Natixis to start its appraisal group. “We have some really smart people on the deal teams here,” she said of her co-workers. “And what I enjoy most is how this job is refreshing what I know and resetting that knowledge curve.”

Perhaps a biologist at heart though, Agnew likens her career path to a layering. “I always felt that I had to go further, I wanted to be able to take a 360 degree view of investment real estate so that I could work around the cycle and see it from all the angles — everything from leasing and sales, to asset management and financial reporting, to valuation in the US and internationally, and every step I took, my curiosity was further piqued.”

She’s not resting on her laurels now either. She’s currently working towards what’s called a Hypzert designation — for the layman, a global gold star from the International Organization for Standardization, one of the first sanctioned consultants to the United Nations Economic and Social Council.

Agnew explained, “Natixis is the only French bank that has a lending practice in Germany and I am working towards the Hypzert designation for Pfandbrief [German debt securities] so that, at some point, I will be ready to help Natixis with that. Then the logical next step is to be on a corporate board of directors. I have spent a lifetime mastering skill sets and applying them to every possible angle of real estate and this is something that I feel brings value to Natixis and that I think I would bring value to any board.”

She is also nurturing a new generation of real estate professionals, although she doesn’t like the term mentoring.

“Mentoring sounds like I know it all and I consider them to be my equals,” she said of her novices. “Their knowledge base is different, but it doesn’t mean it is any less valuable than my knowledge base and what I can learn from them.

“I joke that I like my friends to be 10 years older than me and 20 years younger. Older so that they can teach me what’s going to happen next and younger to keep me from falling behind on what trends I’m going to be dealing with tomorrow.”

AROUND TOWN: Upcoming events you need to know about