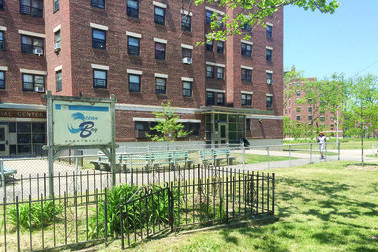 A $560 million plan to rehabilitate a massive Rockaway housing complex has been given the green light.

The money will finance essential infrastructure upgrades, support state-of-the-art resiliency and security systems, and the renovation and preservation of the public housing complex that is home to nearly 4,000 residents in Far Rockaway, Queens.

Permanent Affordability Commitment Together (PACT) is New York City’s implementation of RAD, which includes collaboration between NYCHA, residents, the community and housing advocates.

The aging development was already facing critical maintenance needs and a deteriorating infrastructure before suffering extensive damage from Superstorm Sandy, including flooding and the destruction of the central heating plant. To this day, the complex relies on temporary boilers.

Some of the more notable renovations needed include roof replacements, complete upgrade of elevator machinery and equipment, new boilers and heating systems.

The development is located along Beach Channel Drive between Beach 54th and Beach 58th streets in Far Rockaway.

Led by RDC Development, a joint venture between MDG Design + Construction and Wavecrest Management Team, the three-year, $327 million restoration of Ocean Bay (Bayside) will involve a major overhaul of the development’s infrastructure, with upgrades improving the overall community. All apartments will undergo extensive renovations of the kitchens and bathrooms.

To prepare for future extreme weather events, the restoration will also include a suite of resiliency measures, such as the third-largest solar panel installation at an affordable housing development in New York State, a secure flood wall, water retention swales, stand-alone electric service buildings built above the flood zone, and the conversion from one central boiler steam system to 24 individual hydronic boilers on the roof of each building.

To provide residents with a safer, more secure community, there will also be new and updated security cameras, improved interior and exterior lighting and a new key fob entry system.

“Through PACT, we are able to provide our residents with the necessary repairs while also preserving public housing for future generations,” said NYCHA Chair and CEO Shola Olatoye.

“This innovative partnership will strengthen the Ocean Bay community and provide almost 1,400 New York families with much needed upgrades and improvements for their homes.”

New York State Homes and Community Renewal Commissioner RuthAnne Visnauskas said, “This is government at its best and we are proud to be a part of driving investment in public housing across the state.”

All 1,395 of the apartments will be covered under a new, Project-Based Section 8 Housing Assistance Payment through the HUD RAD1 program.
Citi provided the construction loan and permanent financing and Richman Housing Resources syndicated the LIHTC.

RAD allows public housing authorities to shift apartments funded by HUD’s Public Housing program (under Section 9) to a long-term contract under Section 8 that provides the stability to attract new investment.

RAD restricts resident rent to no more than 30 percent of income. The program also guarantees permanent affordability through mandatory contract renewals, and preserves NYCHA’s ownership interest in the property.

NYCHA implemented the RAD conversion locally through a process called Permanent Affordability Commitment Together (PACT).
Through PACT and the regulatory flexibility of RAD, NYCHA was able to access $325 million in funding for repairs, including $194.4 million from FEMA.

“It is not enough to simply rebuild; we must look for ways to eliminate the vulnerabilities that allowed for such extensive damage in the first place. The Ocean Bay PAAP 428 project is an excellent example of Community Recovery intent on learning from the lessons of Sandy, and moving forward in a manner that sets the standard for resiliency nationwide,” said FEMA’s NY Sandy Public Assistance Branch Chief Claude Hyacinthe.