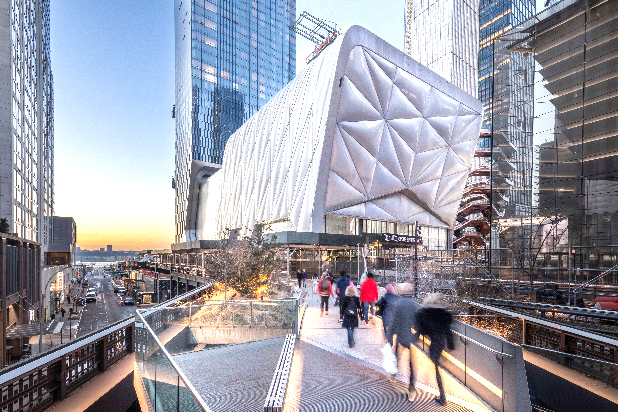 M&T Bank has been named the Founding Bank of The Shed, New York’s new arts center.

The 200,000 s/f arts center located within the Hudson Yards near the High Line, has gallery space, a theater, a rehearsal space, creative lab and an event space. The facade can be pulled back to create an open-air plaza.
The $550 million project designed by Diller Scofidio + Renfro and Rockwell Group will officially open this weekend with a five-night concert series celebrating the influence of African American music with a new generation of artists.

Also on the bill this year are plays, exhibitions and dance performances by artists of all disciplines.

M&T will be the exclusive financial services sponsor for the arts center. “Thrilling is the word to describe seeing The Shed become a reality, as we have been involved with the project since Day One, when it was just a bold idea,” said M&T’s Regional President for New York City Blair Ridder.

M&T arranged early bridge financing for The Shed that helped fund its design, planning, construction and pre-opening operations. Along with its subsidiary, the wealth management firm Wilmington Trust, the bank has become a multi-year partner providing major ongoing support for The Shed’s live performance commissions.

“We pride ourselves on providing a tailored approach to meeting the financial needs of our clients, and we are delighted that we could work hand-in-hand with The Shed to customize the financing needed to make their vision come to life. We look forward to supporting and experiencing the many inspiring and path-breaking new works of art that are sure to come,” added Ridder.

“Our partnership with M&T has been a thoughtful and creative endeavor,” said the Chairman of The Shed’s Board of Directors Daniel L. Doctoroff.
“They have been a nimble lender since we began our project in 2014 in their role as construction underwriter, and the continued support of M&T and its wealth management division, Wilmington Trust, has been a huge asset as we publicly debut this groundbreaking cultural institution.”