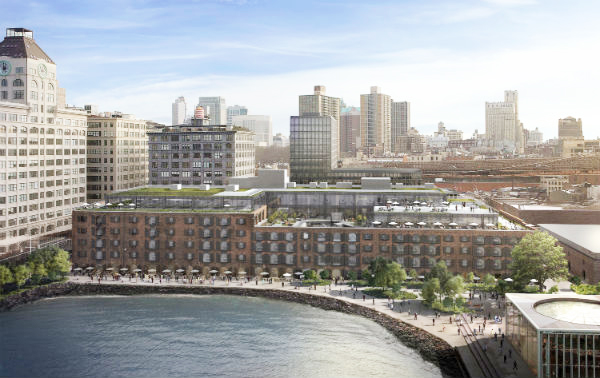 M&T Bank has funded a $245 million refinance package for the Empire Stores development in DUMBO.

Stroock National Real Estate Group announced it represented a joint venture between Rockwood Capital and Midtown Equities in securing the financing from M&T Bank for the mixed-use project.

The $245 million loan is for 55 Water Street, an 1860s-era warehouse building that was recently renovated – including the addition of a sixth floor to the original five stories. Part of the Empire Stores development, the project will ultimately have 380,000 s/fof commercial space, including office, retail, restaurant, exhibition, rooftop gardens and public facilities.

The loan consisted of a $217.3 million land loan, plus $27.7 million for future project costs.

Midtown Equities and Rockwood Capital partnership was selected by the Brooklyn Bridge Park Board of Directors to redevelop Empire Stores in 2013. At the time of the selection, the City provided the following description of the former warehouses: “The Empire Stores are a complex of seven contiguous four- and five-story historic warehouses containing 347,000 s/f . The warehouses, located in DUMBO, were built between 1869 and 1885 and primarily used for coffee storage until they were abandoned in the 1960s. The warehouses have been closed for over 50 years due to deteriorated buildings conditions. Redevelopment will reactivate the structure and allow for a mix of commercial, retail and office uses that complement that unique character of this industrial waterfront structure.”

Today, the development is anchored by West Elm furniture company as well as media companies Laundry Service and Cycle.