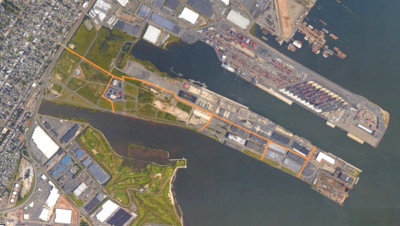 The MRC financing will be used to complete site acquisitions and for construction of all three developments. Shaya Ackerman of Meridian Capital arranged the deal.

“MRC thrives on large, complex transactions like this portfolio and we’re excited to be involved,” said Josh Zegen, Co-Founder and Managing Principal of MRC.

“We’re financing three major transit-oriented development sites located in different towns, so clearly there are many moving parts, but our experienced team makes complicated deals easy for the borrower and allows them to focus on their core expertise of building. These are prime sites in communities with strong apartment demand based on demographics and transportation connections, and we believe they have great prospects for success.”

Harbor Station South, the Bayonne development (pictured top), will consist of 651 units spread over two buildings. The project is situated steps from the 34th Street Station of the Hudson-Bergen Light Rail system, which provides connections to New York City, Jersey City, Hoboken, and many other destinations.

A ferry station is being planned in the immediate vicinity with service to Manhattan and Staten Island. The Raritan apartments are to be sited on the block surrounded by First Avenue, Third Street, Second Avenue, and the NJ Transit rail bed in Raritan, NJ.

The project will offer 276 units, including 20 affordable apartments, ranging from studios to two-bedrooms.

With the New Jersey Transit Raritan Station a short walk away, The Raritan will provide residents with a simple commute to New York City, Newark, and Jersey City.