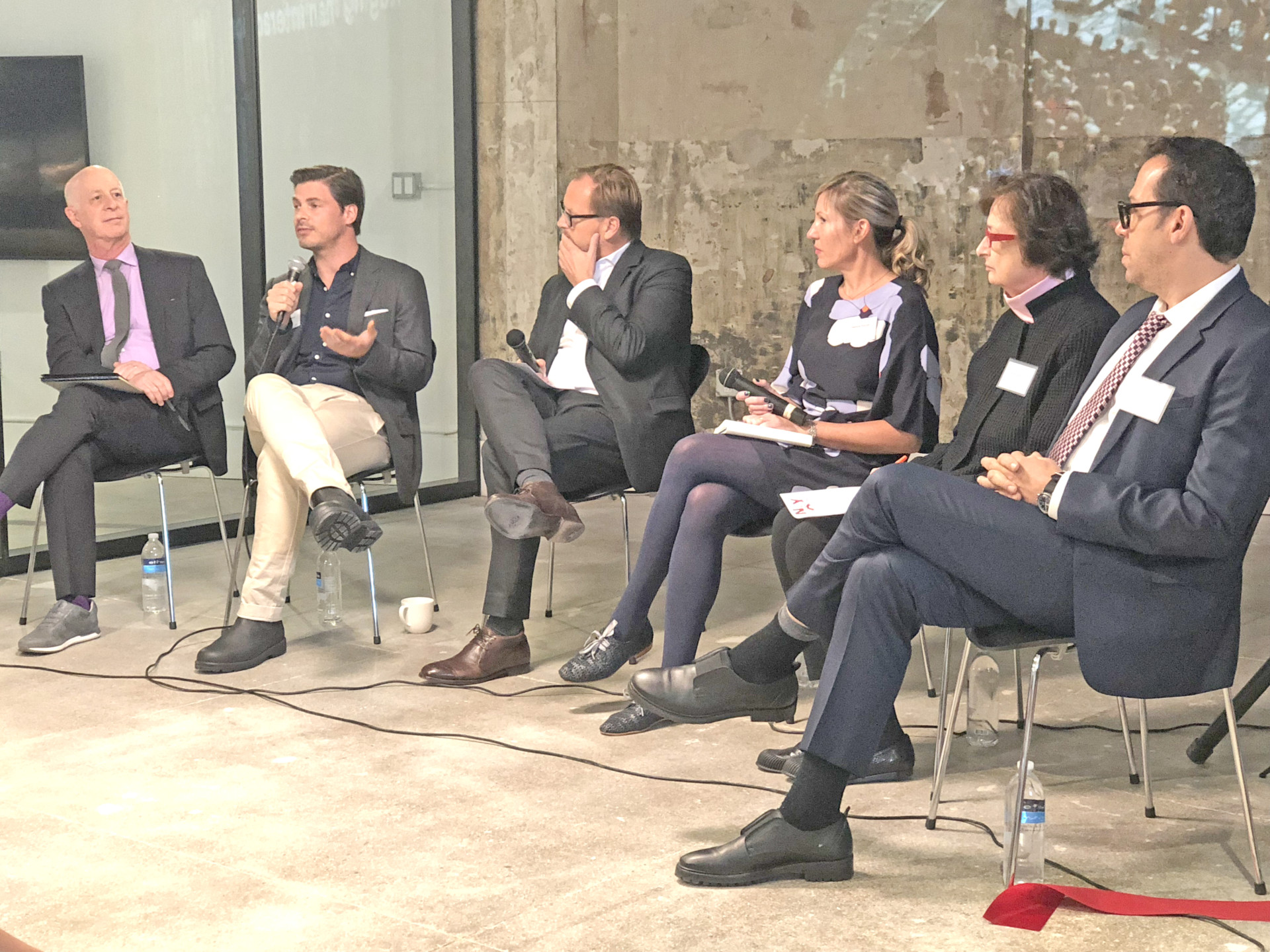 Money, politics and how to build a better city

Architecture can save the world, or so sayeth the members of a panel discussion hosted by the design firm Henning Larsen recently.

In the wide-ranging conversation held in celebration of the company’s first North American office — recently opened on West Broadway in Tribeca — experts from the worlds of design, development, geopolitics and publishing dissected the issues of sustainability and equality in big cities as well as the shifting role architecture in the age of information.

Notions veered from public-private partnerships to the fringes of socialism as panelists discussed the need for architects to be given greater control over their projects and even seats of political power.

“What seems to be missing most, from my perspective, is architecture being well represented in government,” said Federico Negro, head of design at WeWork. “Most of our politicians are either coming from legal backgrounds or managing backgrounds or other types of backgrounds that don’t necessarily have the connection nor the expertise in understanding how cities function or how they should function.

“We keep waiting for someone to magically invent a vision for our cities that’s going to be in line with what we all think is right, and that’s not going to come from those places,” he added. “It just won’t.”

Moderator Paul Goldberger, an architecture critic and contributing editor at Vanity Fair, concurred, pointing out that the last president with an architecture background was Thomas Jefferson, who designed his own home at Monticello.

During the event, which was attended by Mary, Crown Princess of Denmark and Anders Samuelsen, the country’s foreign minister, the main thrust of the conversation was that cities — especially conduits for global capital, such as New York — are developing in ways that are increasingly inequitable and therefore less sustainable.

“There are rules of engagement in everything we do in life, rules of law, and it’s not about hemming us in, it’s about making us civil to one another, making us civil in regards to the environment, making us human,” Szenasy said.

“It’s not just the politics that divides us, it’s the money, it’s the development that’s a symbol of that money, it’s the kind of blatant claim that this is going to be the most luxurious place on earth while the rest of us are groveling around in the rubble on the street,” she added.

David Belt, founder of the adaptive reuse firm Macro Sea and New Lab, a tech center in the Brooklyn Navy Yards, took a softer stance on his fellow developers, arguing that most set out with good intentions and have a sense of public accountability. However, he argues that technology and planning could be used to build more responsibly.

Belt advocates using smart sensors and other advanced technologies in place of traditional methods of approximating environmental impacts. He also encouraged local developers to focus on the projects as a whole and pay less attention to their bottom lines, citing Denmark as having a better real estate mentality.
“In Denmark, people are building buildings, in New York, people are building spreadsheets,” he said. “In Denmark, the spreadsheet serves the building and in New York, the building serves the spreadsheet.”

While other members questioned the role of outside capital, Patricia Holly Purcell, head of partnerships for the United Nations Global Compact Cities Program, said business involvement is crucial for smart development, particularly in parts of the developing world that are just getting access to in-home electricity and the Internet.

However, Purcell, who was born in Hell’s Kitchen and has since lived in various cities around the world, believes New York has developed in a way that is oriented toward wealthy, transient residents who don’t establish deep roots in the community. She held up Medellin, Colombia as an example of better-executed city planning.

“There are still many problems (there,)” she said, “but that is one very good example of tackling what probably are intractable problems.”

Henning Larsen’s lone representative on the panel, principle and partner Louis Becker, said many of the issues facing cities around the world could be dealt with by facilitating conversations with stakeholders and building trust within communities.

“In Scandinavia,” he said, “We have a long tradition of debating dialogue that makes people have to somehow be part of the greater good.”