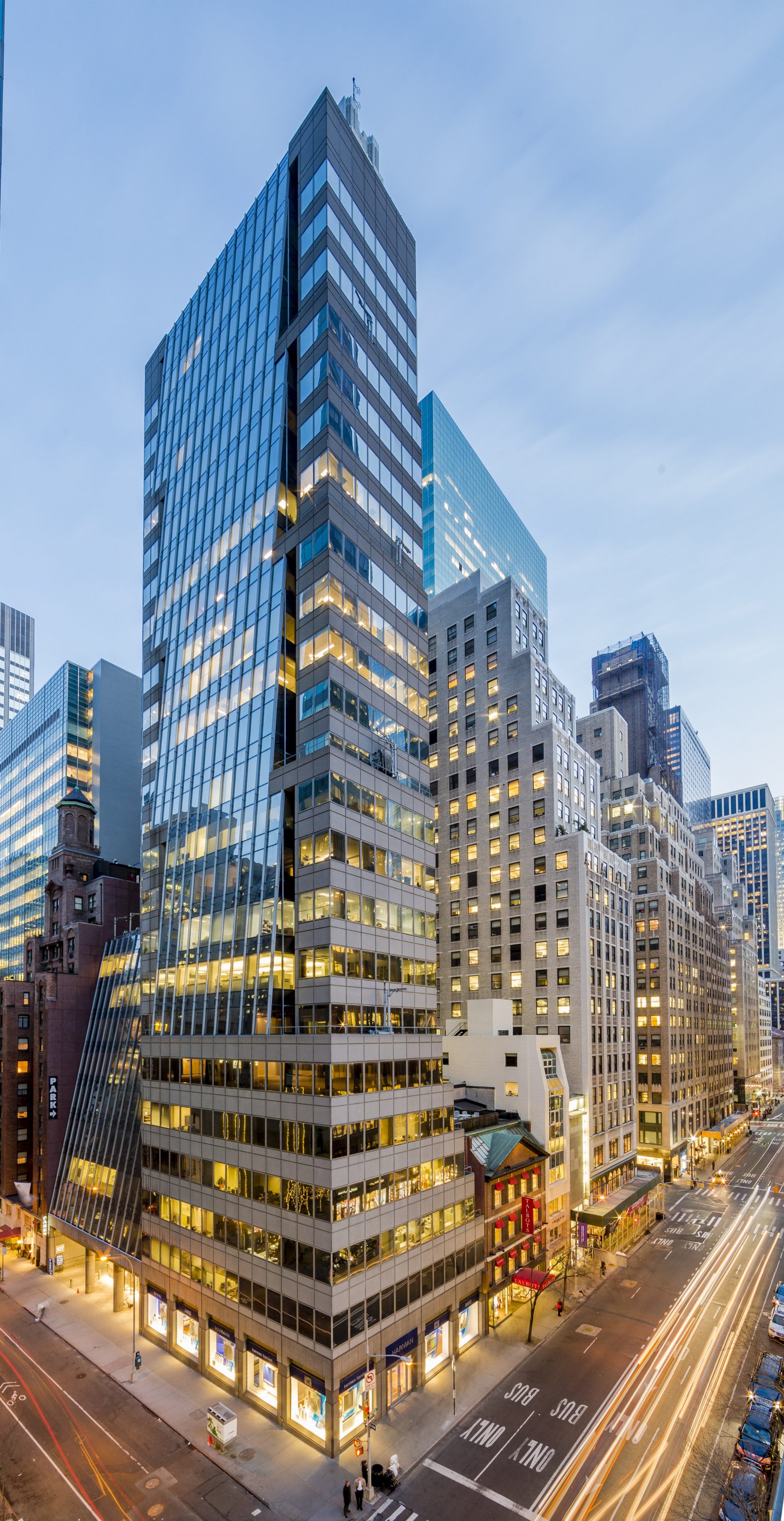 Crisp, polished and befitting the building’s pedigree within the Plaza District enclave of hedge funds, family offices and private equity firms, it had been built just 20 years earlier by the Louis Dreyfus Property Group, now Property Group Partners, and admired for its “extraordinary” massing.

But the times they were a-changing. Before 527 could get a new look, however, MFA had to sort through what it had.

“We helped MFA buy the building 10 years ago,” said Frederick, then a principal with Cassidy Turley before its merger with DTZ and its subsequent purchase of Cushman & Wakefield. “The financial crisis was just beginning. The building was well leased, but it had many near-term expirations coming due. So, the first thing we did was renew and extend.”

Over the next three to four years, 40 percent of the building would empty out due to M&A activity or a tenant’s need for a larger floorplate. Frederick, now a vice chairman with Cushman & Wakefield, and his team worked with existing tenants, addressing annual leases with early renewals and creating staggered expirations.

The team went through 10 to 20 percent of the building every year, he estimates, and, with every floor, the space was completely overhauled.

“Every time we signed a lease, we renovated or rebuilt the floor,” said MFA’s Keith Purcell, vice president of asset management and leasing. “MFA added new bathrooms, HVAC, finishes, lighting, making sure everything was up to code and ADA compliant.”

When the Sumitomo Mitsui Trust Bank decided to relocate and consolidate at MFA’s nearby 1251 Avenue of the Americas, the owner commissioned a new, modern lobby by MdeAS with polished marble tile, upgraded the elevators and introduced state-of-the-art security.

Frederick, Purcell and Hines property manager Chris Linville then started working with art consultant Jay Grimm and came up with a rotating gallery concept for the new-look lobby.

A new, setback terrace was created on the 10th floor for every tenant’s use and the call went out for architects to design efficient, flexible, sustainable office spaces.

Three weeks after Sumitomo moved out, the Community Counselling Service Co. leased one of four floors previously occupied by Sumitomo. It was around then that MFA made its boldest move, according to Frederick.

With the tenancy reshuffled and a number of lower floors now empty, “MFA had the foresight to create a 12,000 s/f pre-built space at a time when larger pre-builts were rare,” said Frederick. “And that’s really what led us ultimately to lease the other floors.”

According to C&W research, there were 41 direct full-floor availabilities between 10,000 s/f and 15,000 s/f in the corridor at the time – and only three were full-floor pre-builts.

“The construction process is time-consuming and expensive,” Frederick said, noting that it can take as long as nine months to get from the design phase to completion. “That’s too much for most smaller tenants.”

Instead, MFA tapped into the changing desires of tenants and created offices that reflected that aesthetic:

Open, collaborative space with fewer rooms and walls made of glass instead of sheetrock.

“At that time, we got back a good amount of space from original occupants, but it was that old, staid design,” Frederick said. “We had to demolish it.”

LB Architects was hired and the firm came up with an “adaptable” design that Frederick said supports a high degree of change. “We made it so that the walls can be moved,” he explained. “If you are going to spend the money pre-building, the more permutations you have, the more potential users can see the same space work for them.”

“One tenant might want the space open, another might want more offices, or bigger conference space,” he said. “So, we created a ceiling gap where we can move the walls, the lighting, workspaces, all quickly and inexpensively without damaging the carpet, ceiling or walls.”

The pre-built was created with full-height glass office fronts and doors, a recessed ceiling over open-plan desks, lounge-style breakout areas and constructed offices and conference rooms. An open-concept kitchen has quiet cover plank flooring and stainless-steel appliances and the expanded bathrooms are detailed with artist tile.

When the showpiece was ready, potential tenants could see a turnkey space altered to suit their needs. The 12,000 s/f floor was also considered an example of the building’s standard.

“Having that one space helped to lease six other floors,” Frederick said.

The latest lease is an expansion by SkyBridge Capital, an existing tenant, that is relocating to take the newly completed pre-built fourth floor, vacating its 8,102 s/f office on the 16th floor. SkyBridge’s relocation along with four expected move-outs in the first quarter due to expansion needs provides rare space options for a building that’s almost always nearly fully leased leased.

“It’s an unusual window of opportunity at 527,” said Frederick, who expects brisk leasing activity, mirroring recent years. Last year, four new tenants moved in from within the submarket, including a law firm, a real estate private equity firm, a global investment bank, and an alternative-investment platform provider. These followed four others signed in early 2017, along with two renewals.

Frederick believes the success of the program lies in the owner’s reputation for construction expertise and building out spaces to the unique specifications of tenants in the 6,000 to 13,000 s/f range.

“These types of tenants want their own environment, their own floor, kitchen, conference rooms,” he said. “Many require a high degree of security, privacy and self-contained space.”

MFA also set the building apart by providing other enviable features many tenants want, but are hard to come by in a building that size, such as an outdoor terrace and access to an underground parking garage.
“We are aware of the building’s lack of a fitness center. We don’t have the space,” Frederick said. “But we have tenants with private showers, and their employees work out at their private gyms or run in Central Park, come back, shower and are right back at their desk.”

As the showings at the midtown grand dame continue, the management and leasing teams are celebrating another achievement — the sale of a painting from last quarter’s lobby gallery.

“The gallery has given us a chance to create a warm and welcoming environment for our tenants and to help support artists,” Frederick said. “Tenants love the concept and MFA believes it’s important to support noteworthy and mid-career artists. And itʼs even better when they find a buyer for their work.”

Savills Studley pitches in to put PGA in a new home