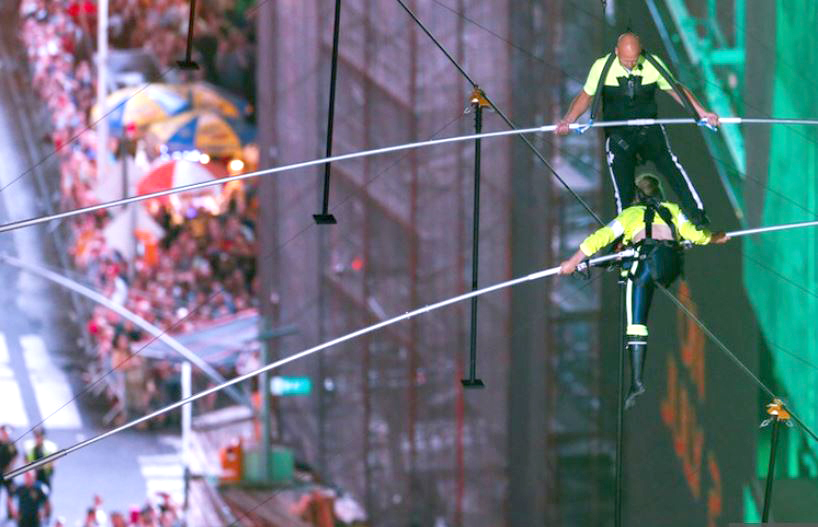 And McLaren Engineering Group played a big role in the stunt’s success.

The  firm provided structural engineering services for the Dick Clark Productions (DCP) that ensured the walk went off without a hitch.

McLaren  worked with design engineer, Scott Lewis, Nik Wallenda and his team of riggers to engineer the steel wire tightrope, just three-quarters of an inch wide.

The rope spanned north-south for five blocks and was anchored to a roof beam of 1 Times Square and to existing maintenance davits on 2 Times Square.

McLaren also worked with iDEKO and specialty contractors to engineer a number of platforms and camera mounts at various locations on buildings throughout Times Square.

The Woodcliff Lake, N.J.-based firm worked with a tightrope pretensioned to over 20,000 pounds. The assembly for the event also included overhead safety cables and lateral stabilizer cables spaced along the tightrope at roughly 30-foot intervals to keep it from swaying during the walk. These stabilizers were tied off to building and sign structures on the series of buildings lining Times Square.

McLaren also conducted inspections and signed off on the integrity of all the rigging, platforms and camera mounts prior to the performance. Several weeks before the event, McLaren observed proof load testing of the 2 Times Square davits to confirm that they were suitable for anchoring the tightrope and safety lines.

“With proper design, engineering, construction, inspection and execution, this thrilling stunt made history for the city, the Wallendas and all the people involved.”

The Wallenda siblings, seventh-generation additions to “The Flying Wallendas” circus troupe, worked with a robust production crew prior to the event, which saw them crossing paths with crowds watching below.

Both performers wore safety harnesses attached to the safety cables, a precaution required by both New York City and ABC, which broadcast the breathtaking pursuit.

The June 23 performance, which aired live, marked Lijana’s first stunt since the setback. It required her to slip past her brother at the midway point of a wire that also featured a sharp incline from end to end.