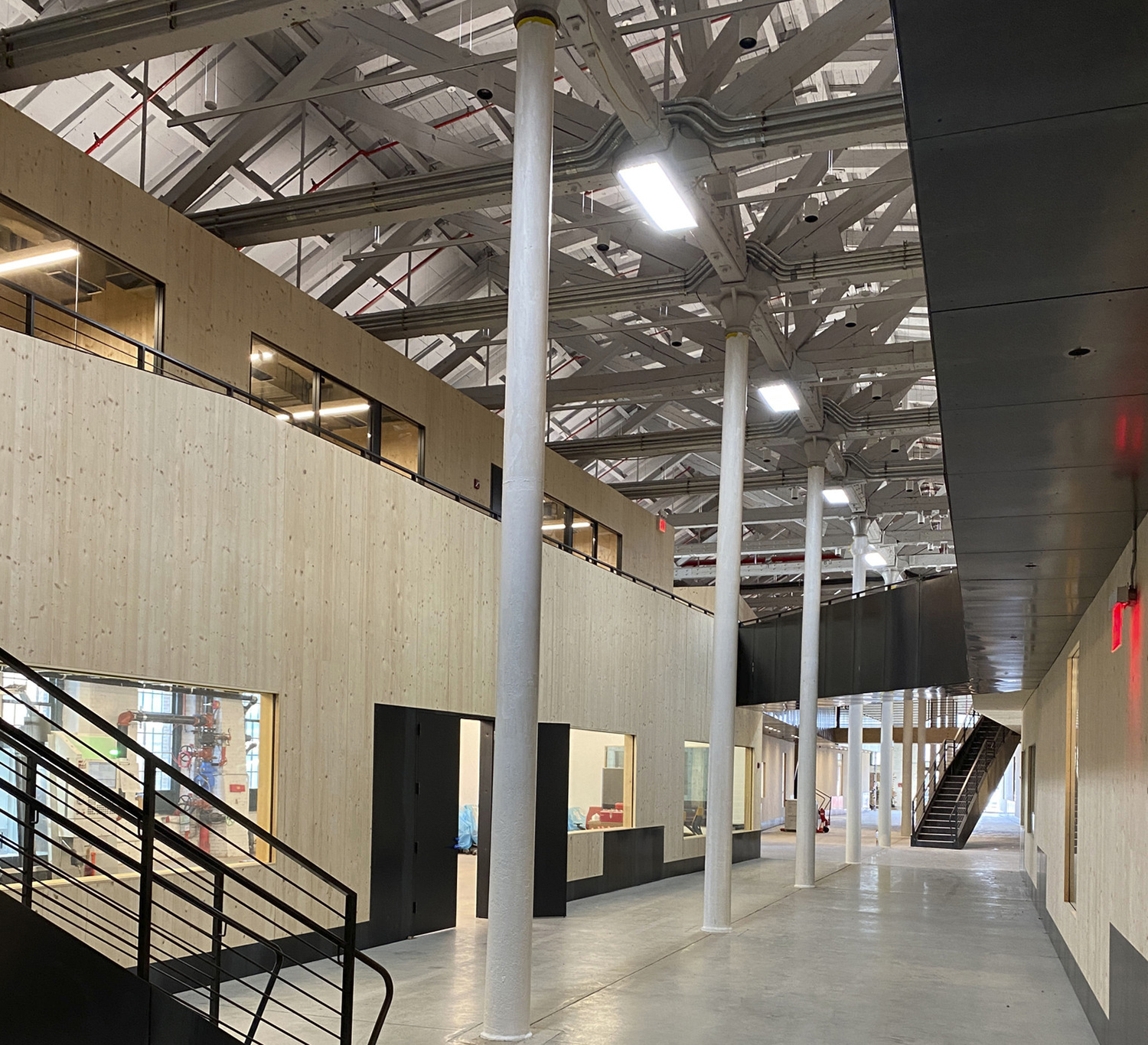 Nanotronics, a science technology company that combines AI, automation and sophisticated imaging to manufacture hardware and software capable of working on a nanometer scale, will use the building as its headquarters.

The factory, designed by Rogers Partners Architects + Urban Designers, will house research and development operations as well as production and design by the company’s artificial intelligence researchers, computer scientists, chemists and physicists.

“The Brooklyn Navy Yard has a history of serving New Yorkers in times of crisis, and it proved its worth once again at the height of the COVID-19 pandemic. Today, it has an important role to play in our city’s recovery – by building a sustainable and high-tech manufacturing base in the heart of New York City,” said Mayor Bill de Blasio. “From creating hundreds of jobs to nurturing the next generation of STEM talent, Nanotronics and the Navy Yard are helping build a recovery for all of us, and I’m proud to support their extraordinary efforts.”

De Blasio was joined by executives from the Brooklyn Navy Yard Development Corporation (BNYDC), Nanotronics, Empire State Development (ESD) and CUNY’s Medgar Evers College for the ribbon-cutting ceremony to celebrate the opening of the center in the Navy Yard’s historic Building 20, a 150-year-old former shipbuilding factory.

The project was primarily funded through $3.25 million from the City of New York and a $2.25 million Regional Economic Development Council capital grant through ESD in exchange for a commitment of 190 jobs.

“We wanted to create a modern-day Edison Lab,” said Matthew Putman, CEO and cofounder of Nanotronics. “That vision of building in a way that was never done before, with the same hope and possibilities of better jobs, local products, and leading the world in invention seemed like a real possibility in the Brooklyn Navy Yard. We are thrilled to advance manufacturing with the perspective of seeing our past, looking out of our windows at the city where so much of our present is on view, and build an intelligent factory where robotics, AI, and humans can work together to create a sustainable future.”

Nanotronics expanded its New York presence into the Brooklyn Navy Yard in 2016. As the first and largest tenant of New Lab, the company grew its Research and Development workforce three-fold. By 2018, the company needed to expand manufacturing operations both for redundant manufacturing and to rapidly scale new products. The foundational roots within the former manufacturing hub created an ideal location with waterfront access. The hub’s location in the Navy Yard also provides space for partner firms in the life sciences, semiconductor, aerospace, automobile, additive manufacturing and quantum computing sectors to grow alongside Nanotronics.

BNYDC played an integral role at the outset of the COVID-19 pandemic last spring, serving as a central PPE production hub for the City as it faced shortages in face shields, medical gowns and ventilators, among other equipment. Ultimately BNYDC spearheaded the production of roughly a dozen products by Yard tenants, including nearly 10 million units of PPE and more than 26,000 gallons of hand sanitizer.

Nanotronics played a critical role in COVID-19 response efforts as well. BNYDC helped Nanotronics open half of Building 20 at the start of the pandemic to enable the implementation of Intelligent Factory Control (IFC) – a first step to building the tools that sequenced the virus’ genome, necessary for diagnosing SARS-CoV-2, identifying variants, validating the first vaccines, and the production of the vaccine itself.

In July 2020, ESD restructured the disbursement schedule for Nanotronics’ $2.25 million capital grant to assist with COVID-19 response efforts and frontloaded the funding to help the company accelerate production of nHale, a BIPAP machine it created for patients suffering from COVID-19 that received an EAU from the FDA.

In just 90 days, Nanotronics team conceived, designed, built, and received Emergency Use Authorization from the FDA for its non-invasive respiratory relief product, nHale, to treat COVID-19 in private hospitals, homes, and large converted spaces. nHale was one of the first and most cost-effective products to fill the much-needed gap in the NIH treatment guidelines for a phased respiratory approach to COVID treatment.

The opening of Building 20 comes as the Navy Yard is undergoing its largest expansion since World War II, which will increase the Yard’s job total from 12,000 to 20,000 in the coming years. The expansion includes the $187 million renovation of Building 77 to provide space to vertically integrated design and manufacturing companies and the ground-floor Food Manufacturing Market; the Green Manufacturing Center, which houses New Lab, Crye Precision, and Bednark; and an expanded Steiner Studios, the largest film and television production studio outside Hollywood in the United States. BNYDC also recently announced a $2.5 billion master plan to create 10,000 additional jobs housed in vertical manufacturing buildings, which would bring the total number of jobs at the Yard to 30,000 in the coming decades.

Building 20 was constructed in 1865 and housed the production for the Navy’s first iron-plated wooden warships. Rogers Partners collaborated with Nanotronics to turn the warehouse into a vertically integrated advanced manufacturing headquarters for the company. Few advanced manufacturing facilities seamlessly integrate the entire process; bringing together R&D and manufacturing under one roof. Initially coined as New York City’s first “smart factory,” Rogers Partners designed the building to be cleaner and more efficient than traditional factories. The adaptive re-use on legacy infrastructure along with the design, greatly reduces carbon footprint. This work helped the project win an Architect’s Newspaper Best of Design award in 2019.

The new building is also a model for sustainable development. While the construction of the main shell for a similarly sized facility would result in approximately 1,971 metric tons of embodied CO2, the newly constructed portion of the project is estimated at approximately 425 metric tons. The building is one of the first Commercial Cross Laminated Timber (CLT) projects built in New York City – using CLT for the interior to act as a carbon sink. Altogether, the CLT stores an estimated value of 411.2 metric tons of CO2, effectively offsetting the new construction’s emissions and resulting in a carbon neutral project.