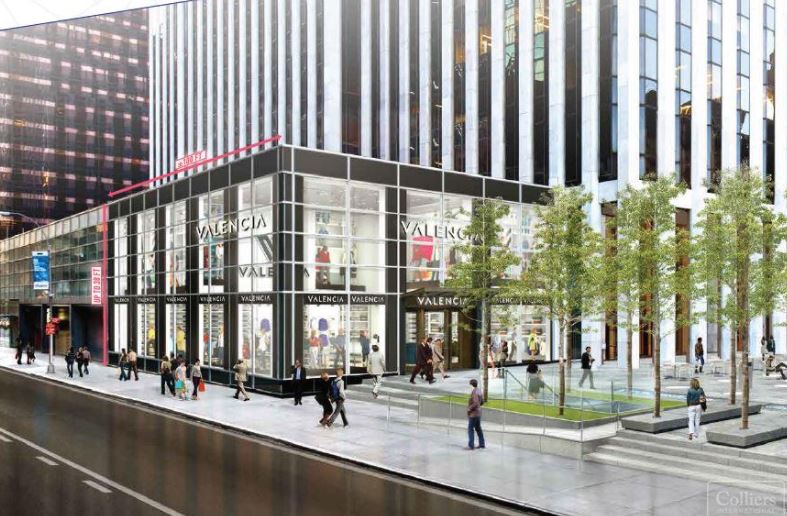 Under Armour is asking $20 million a year for the 24,403 s/f left of its once-heralded flagship store at the GM Building in New York City.

Boston Properties took back half of the original 53,000 s/f that the sports retailer had planned to turn into “the single greatest retail store in the world” to create its own new tenant amenity center.

Now David Green, vice chairman and co-leader of Colliers International’s New York Retail group, along with Steven Soutendijk at Cushman & Wakefield, has been retained by Under Armour to sublease the 24,403 s/f – and he has some powerhouse brands circling.

“It’s next to the Apple store, has 38 ft. ceilings, almost entirely column-free. It clearly has the most visible branding potential of any space on Fifth Avenue that’s available. It’s a very, very, very good space from our perspective.”

When Under Armour first signed the reported $30 million a year deal for the original 53,000 s/f in 2016, it was considered a coup for the company as it jostled for market dominance with rival, Nike, and sought to boost its brand identity with a showpiece store in one of the world’s top luxury markets.

It beat out competition for the iconic space at the base of the GM Building at 767 Fifth Avenue that had been home to FAO Schwartz for three decades before it closed in 2015, and founder Kevin Plank promised to turn it into “the single greatest retail store in the world” when it opened in 2019.

The opening was pushed back when Apple temporarily occupied the space while it renovated its cube location next door.

The sports gear unicorn saw its sales growth stumble after 26 straight quarters of growth. Plank stepped down as CEO 2019 just before the COVID pandemic plundered its share value further.

The first hints it would forego the opening of the flagship Fifth Avenue store came last fall, when chief financial officer Dave Bergman said the company was facing weak demand and a drop in revenue that may force it to focus on smaller, more profitable shops and online sales.

“The Fifth Avenue location is a premier retail location, but we’re considering whether it may be better suited for someone else at this time,” said Bergman.

Colliers’ David Green said Boston Properties had since taken back 25,000 s/f for its tenant amenity space and that he and Soutendijk are now on the hunt for that “someone else.”

He said he already has some major players poking around. “International brands that want to be on that stretch of Fifth Avenue and are looking for recognition have come to the States and view it almost as a beacon. It’s fantastic as a visual advertising vehicle. You have all of the up-and-coming cool brands that want to make a statement that are known around the world, luxury fashion that has traditionally been on Fifth Avenue… We have a number of those players. That’s the scope. It’s the best of the best that are looking.”

A retail leasing veteran who previously worked with Soutendijk at Cushman & Wakefield overseeing Boston Properties retail portfolio, Green said that while the city had been “hit hard” as a result of the pandemic, “luxury brands are recovering well and we are seeing much more interest and activity.”

He added, “I think New York has been through the toughest part in terms of retail leasing and we are now looking forward to much more activity. In the last three-to-four weeks, the number of groups who are asking to see the space and submitting proposals has increased dramatically.

“I’m very bullish on the near to long-term future for New York. It has always had an allure that other places don’t have and I am confident that, based on what we are seeing right now, that will come to fruition.”

A spokesman for Under Armour told Real Estate Weekly, “In conjunction with our restructuring plan announcement in April 2020 – Under Armour made public, the strategic decision to forgo the opening of its New York City flagship store on 5th Avenue and instead actively market the property for sublease.

“New York City remains an important market and we continue to evaluate opportunities that are presented to us. “