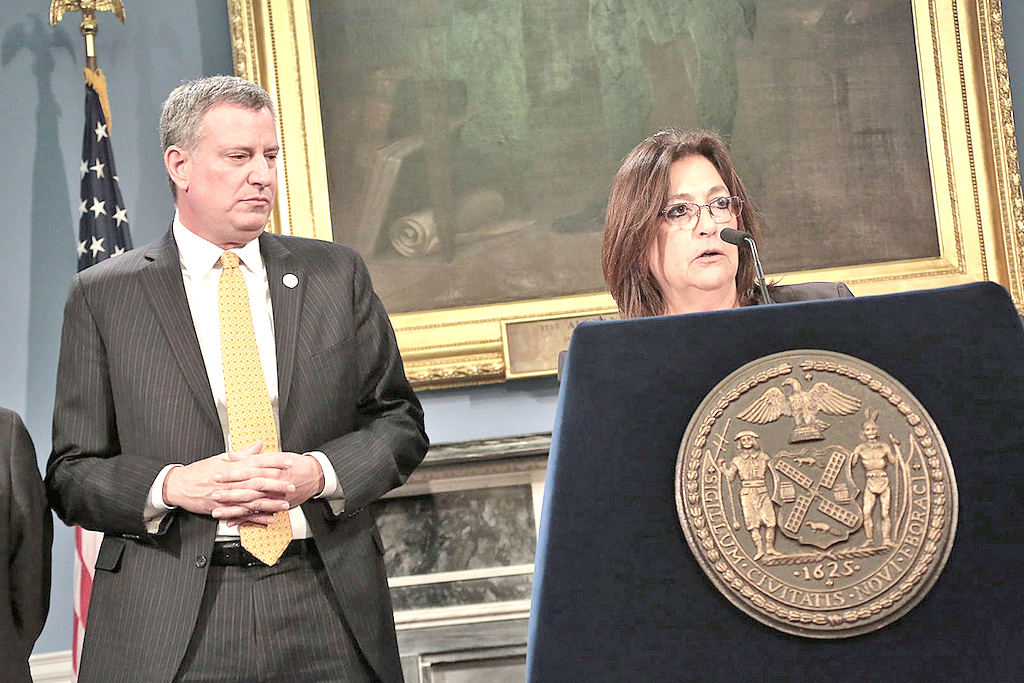 Mayor de Blasio appointed Lorraine Grillo as Commissioner of the Department of Design and Construction. Grillo will also continue on in her post as the President and CEO of the New York City School Construction Authority.

“Lorraine Grillo is universally admired as someone who gets it done. She’s proven it with 75,000 new schools seats and now she is going to prove it on our streets and public buildings,” said Mayor de Blasio. “I also want to thank Ana for her service as interim commissioner and am delighted she’s taking new leadership at the DEP.”

“We’ve worked very hard at the SCA on creating and improving projects across the five boroughs and I look forward to bringing that same type of efficiency to the DDC,” said Lorraine Grillo. “Thank you to Mayor de Blasio for the opportunity to continue serving the people of New York City in this additional capacity and help bring new solutions to the agency.

Grillo is a dedicated public servant. She began her career at the New York City School Construction Authority over 24 years ago as a Community Relations specialist. In 2010, Grillo took over as Acting President and CEO of the SCA. In February 2014, Mayor Bill de Blasio reappointed her to her position – making her one of only two re-appointments from the prior administration and the longest serving SCA president.

As a manager of one of the city’s largest contracting agencies, Grillo has spearheaded a major expansion of the agency’s outreach to minority and women-owned businesses, ensuring more opportunity for New Yorkers to participate in its projects.

Under her leadership, the SCA has successfully completed over $25 billion of construction, produced over 75,000 new school seats and completed thousands of capital improvement projects in existing school buildings. Over the last eight years, the SCA has never missed a school opening.

The Mayor also announced the appointment of Jamie Torres Springer as First Deputy Commissioner at DDC. Torres Springer has worked with public, private and non-profit sectors to drive growth through inclusive city planning and infrastructure development for over 20 years. He has previously served as the lead consultant for the preparation of the Mayor’s OneNYC infrastructure plan and served as the Deputy Director of the Special Initiative for Rebuilding and Resiliency as part of the recovery efforts from Hurricane Sandy.

Ana Barrio will become Deputy Commissioner of DEP’s Bureau of Engineering Design & Construction.
Lorraine Grillo began her career at the New York City School Construction Authority (SCA) over 24 years ago as a Community Relations specialist. Over the years, she held a variety of positions within the agency including Director of Government and Community Relations, Senior Director of Real Estate Services and then Executive Director/Chief of Staff to the President.

In May of 2010, Lorraine took over as Acting President and CEO. After successfully opening 26 new schools, at the time, the single most successful year in SCA history, she was appointed President and CEO. In February 2014, Mayor Bill de Blasio reappointed Lorraine to her position making her one of only two re-appointments from the prior administration and the longest serving SCA president.

Over the past eight years, the SCA, under her leadership, has successfully completed over 25 billion dollars of construction, producing over 75,000 new school seats and completing thousands of capital improvement projects in existing school buildings. She has led the SCA in its effort to find new and innovative ways to address school overcrowding including developing strong public/private partnerships with major developers. She met the challenge of completing the replacement of PCB containing light fixtures in 760 schools within five years. Her team was responsible for the reopening of 71 schools damaged by Hurricane Sandy in record time. In addition, in 2015, under her leadership, the SCA met the administration’s mandate opening 35 Universal PreK centers for the city’s four-year-old children in less than six months. Now that work continues with the addition of the 3K for All initiative. Throughout her career, she continues to be a tireless advocate for the MWLBE community, maintaining the SCA’s reputation for the best MWBE program in NY State, and as a national model.