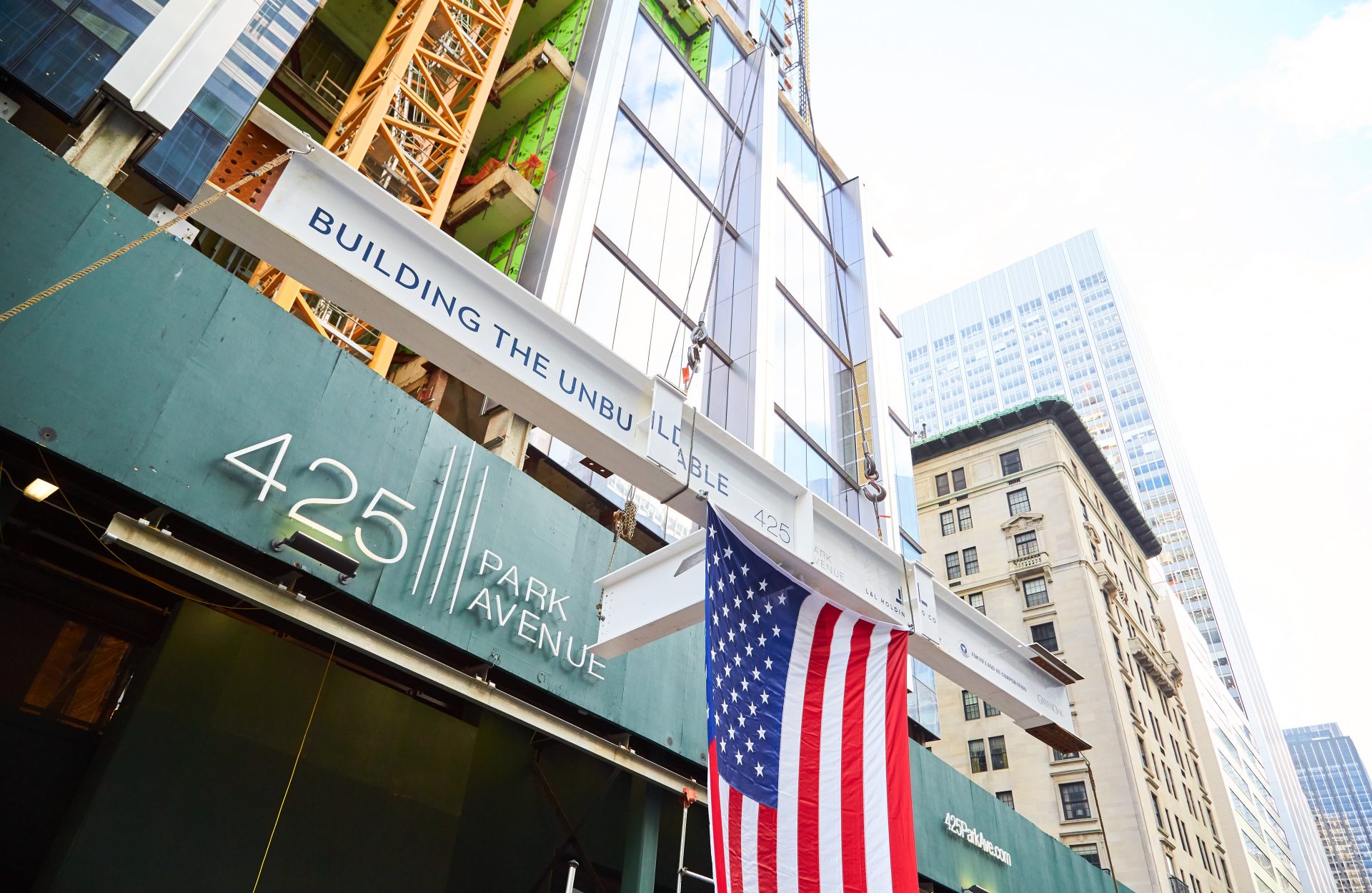 L&L Holding Company Chairman and CEO David W. Levinson and President and Chief Investment Officer Robert Lapidus were joined by Pritzker Prize-winning architect Lord Norman Foster of Foster + Partners, Masaoki Kanematsu of Tokyu Land Corporation, and Sonny Kalsi of GreenOak Real Estate, to celebrate the topping out of 425 Park Avenue, the first full-block office tower to rise on the fabled boulevard in half a century.

At the ceremony, which commemorated the completion of 425 Park’s steel superstructure, members of the design, construction and development team signed the final steel beam, which was then lifted 725 feet and placed atop the upper most floor of the building.  The tower will ultimately rise to 897 feet once three ornamental steel and glass fins are assembled to create an elegant a readily identifiable addition to the Manhattan skyline.

“Since acquiring the future rights to redevelop 425 Park Avenue more than 15 years ago, L&L Holding has worked diligently to design, develop and construct a 21st century Plaza District tower that will redefine the modern office environment and that can stand the test of time,” said David W. Levinson.  “We congratulate all of our partners, who have wholeheartedly embraced our mission and are helping to transform that shared vision into reality.”

Robert Lapidus added, “Throughout this process, we have treated 425 Park as a once-in-a-lifetime opportunity to make an indelible mark both on the skyline and within the heart of the world’s most iconic commercial district.  Starting with the competition that led to the selection of Norman Foster, we have gone to great lengths to assemble a world class development and investment team, and we are grateful for their vital contributions to this major milestone.”

Norman Foster, Founder and Executive Chairman, Foster + Partners, said: “New York is a city that I have deep personal connections with dating from my time as a student at Yale University to present day where I maintain a home. The design for 425 Park Avenue emerged as a response that is respectful of its historical context, while reflecting the spirit of its own time. It will set new standards for workplace design and provide an enduring landmark that befits its renowned location.”

Located between East 55th and 56th Streets, the new 425 Park Avenue will be defined by its best-in-class technology and amenities. The tower will feature a 45-foot tall grand lobby, two dramatic 38-foot tall setback floors and a 38-foot tall penthouse office.  Each setback floor will incorporate more than 3,000 square feet of landscaped outdoor terraces. The upper setback will serve as a curated, building-wide amenity floor with dining and meeting spaces, relaxation and mediation rooms, as well as sweeping views across Central Park, Midtown and beyond.

L&L Holding Company LLC is partnering with world renowned Chef Daniel Humm and Restaurateur Will Guidara, the proprietors of the Michelin-starred Eleven Madison Park and The NoMad, on their third New York City restaurant, which will situated at the base of the gleaming new tower.

Approximately 30 percent of the office space in the 670,000 square-foot tower, which will open in early 2020, has already been leased to Citadel, LLC, a global asset management firm headed by philanthropist and investor Kenneth C. Griffin.

The tower is being constructed to L.E.E.D. Gold sustainability standards and will be the first commercial office building to achieve WELL certification, which recognizes innovations to enhance the health and well-being of a building’s future occupants.