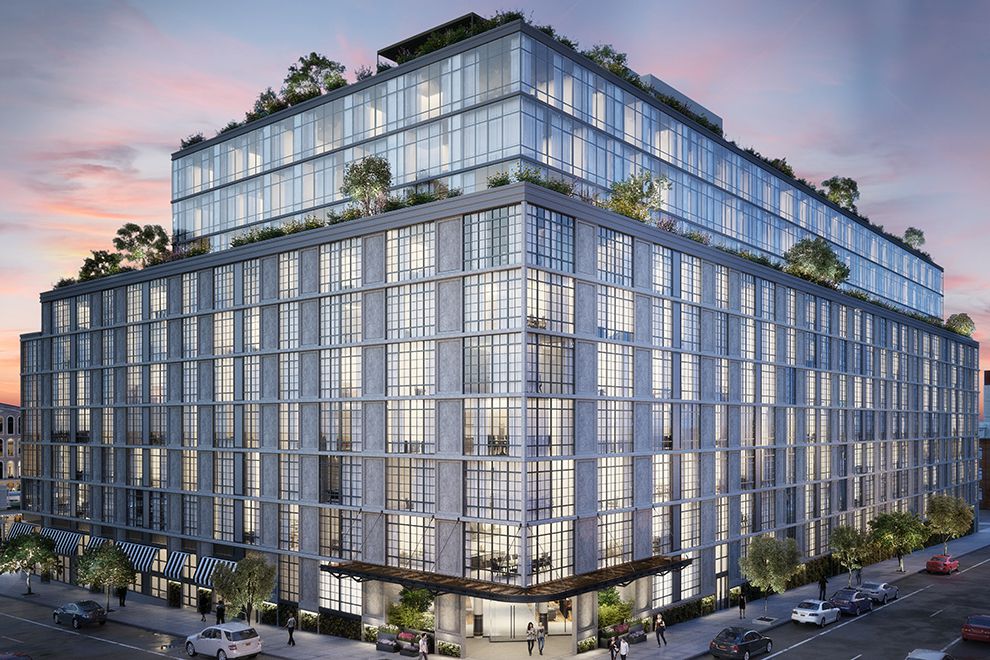 Even as shiny, new towers of glass and steel sprout up like weeds, a certain bygone style is enjoying something of a renaissance.

Not the Gothic Revival of uptown’s stone cathedrals or Brooklyn’s brownstone row house, but rather the boxy, utilitarian buildings of they city’s industrial past.

Converted into lofts, studios and tech-centric offices, New York’s former factories and warehouses have helped revitalize some of its most blighted neighborhoods.

Inspired by this post-industrial poise, the Lightstone Group built its latest multifamily rental from the ground up, not with plates of uninterrupted glass or sheets of burnished metal, but stone columns and paned windows. The end result is an industrial aesthetic that helps ARC blend in with its post-industrial surroundings in Long Island City.

“With the concrete floors, tile ceilings, the use of iron and stone on the outside, we built it to look like a refurbished warehouse,” Lightstone president Mitchell Hochberg said. “We wanted it to be in context with the community.”

Located near the 39th Street stop on the elevated N-W line, ARC is in the Dutch Kills section of Long Island City, an area that, like the rest of Northwest Queens, has historically been home to industrial sites, one- and two-family homes and a few small apartment buildings.

Unlike it’s waterfront counterpart, Dutch Kills has not gone through rapid redevelopment during the past decade.
Prior to Lightstone’s investment, the parcel at 30-02 39th Street was used as a parking lot. Hochberg said his company built a below-grade garage so parking business could continue operating.

Though there is a contrast in their architectural appearances, there is a through line that connects ARC with another Lightstone project: 365 Bond Street. Clad in red brick, 365 Bond was the first residential development built on the Gowanus Canal, a once-blighted area that is now among the most desirable in Brooklyn.

Hochberg said he could see Dutch Kills following the same trajectory, with ARC serving as the catalyst. “Dutch Kills has a neighborhood feel to it,” he said. “Similar to Gowanus, it’s a neighborhood that has character but just isn’t developed yet.”

After topping out the 10-story building in January 2017, Lightstone began leasing in September and residents began moving in earlier this year.

Before the 428-unit building opened, Dutch Kills had already begun to see an influx of retail tenants and trendy cocktail bars, hip eateries and even a Buddhist temple set up shop within in its confines. Should that trend continue, renters will be treated to vibrant neighborhood nightlife in addition to easy access to Manhattan.

However, Hochberg said his company set out to create an apartment complex capable of standing on its own, regardless of what’s happening in the community around it.

The laundry list of amenities includes a 5,000 s/f fitness center with free weights, CrossFit-style equipment, a spin studio and a yoga studio as well as a full basketball court in the basement. For those who prefer games that require a power outlet, there’s a game lounge in the basement with classic arcade games, ski ball and a 15-course golf simulator. On the roof, residents have access to a 70-foot saltwater pool, bocce courts and barbecue areas.

r, Kronick and Valcarcel Architects, the building also includes an sprawling open-air courtyard atrium. Heavily landscaped with trees and shrubbery, the half-acre park features benches, walking paths and a greenhouse at the center for year-round gardening and events, which are coordinated by an on-site lifestyle director.

On the main floor, the residents’ lounge includes couches, a large-screen television, a pool table and a free-flowing kegerator, making it a prime spot to watch a movie or sports with friends. More introspective residents might enjoy the expansive library on site and the private nooks that are accessible by a spiral staircase.

Attached to the lounge is a WeWork-inspired shared working space that features an elongated desk with rolling chairs as well as alcoved booths with large computer monitors.

“One of the things we always say is it’s great to have amenities, but they don’t mean anything if people don’t use them,” Lightstone Senior Vice President of Development Scott Avram said. “We really have to have our finger on the pulse of what people like.”

Just a few months into its existence, Avram said the site’s lifestyle director has already compiled a varied portfolio of events, ranging from parties — such as the one hosted during the opening round of the NCAA basketball tournament — to small concerts and comedy shows.

To compete in the ever-escalating amenities arms race that is today’s luxury housing market, Hochberg said there’s a something of pseudo-science that he and his team must subscribe to.

“We like to think that, in a certain respect, we have to be sociologists,” Hochberg said. “We try to ask what do people like? What’s changing? What’s evolving? How are people behaving?”

Like many residential developers in today’s luxury segment, Lightstone places a high priority on resident services. What makes it unique is it’s credentials in the hospitality industry.

Founded in 1988 by now-chairman and CEO David Lichtenstein, Lighstone is an owner, operator, investor and developer with a 3,929-key hotel portfolio spread throughout seven states. That includes branded hotels such as Marriott, Hilton, IHG and Starwood as well as its own line of Moxy boutique offerings, which includes three Manhattan locations.

At ARC, that influence can be felt in services such as the 24-hour concierge and valet service that includes laundry, dry-cleaning and apartment-cleaning services. There’s also a catering kitchen on site. Much like a hotel, the apartments even offer keyless entry.

Ranging from $1,800 a month studios to $3,000 two-bedrooms, the units compare favorably in price to other luxury rentals in the city. To achieve this, some of the more affordable apartments run a bit on the small side, but Avram said the developer tried to offset this by adding large windows and space-efficient designs.

All apartments come with Bosch appliances, washers and driers, bronze fixtures and ceilings that are least nine feet tall. There are roughly 100 unique layouts throughout the building, Avram said.

“We wanted to maintain some consistency in the building but we also wanted to avoid making them all cookie-cutter versions on one another,” he said. “Everybody is unique so their living spaces should reflect that.”