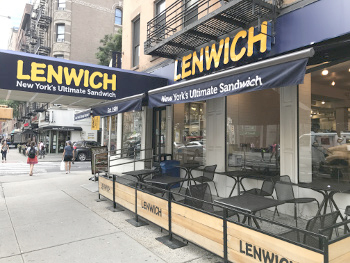 Lenny’s Group LLC (Lenwich) has signed a new deal to open an 18th location at 1332 Third Avenue between 76th and 77th Streets, Pryor Cashman has announced.

Partner Ronald B. Kremnitzer, co-chair of the firm’s Real Estate Group and Food + Beverage Group, who along with partner Benjamin J. Teig, have assisted Lenny’s in their lease negotiations since 1992, noted that the deal took place in an increasingly crowded fast-casual gourmet market.

Lenwich’s CEO and Chair “Lenny” Chu noted, “I am thrilled with our growth in response to record numbers and, more importantly, consistently rave reviews in each of our 17 stores. But it’s all about relationships. I couldn’t do it without the outstanding efforts of all of my employees and strategic partners around New York City. The sky is truly the limit for us.”

The store, “Lenwich by Lenny’s,” is scheduled to open next spring, and will contain over 2,000 s/f. Cory Zelnik of Zelnik & Company LLC was Lenny’s broker on the lease.

A New York institution celebrating over 30 years, Lenny’s was founded by Chairman and Chief Executive Officer Sei Hoon “Lenny” Chu, a Korean immigrant and the original “Mr. Lenny.” With locations throughout Manhattan, it has since become a thriving enterprise selling close to 4 million sandwiches and serving more than 5 million customers each year.

Kremnitzer has a long-standing relationship with Lenny’s and he has represented the company since 1993, when he negotiated the lease on the second deli location on the Upper West Side. He has since represented Lenny’s in each of its leases, as well as in numerous other matters as they have expanded throughout the city.