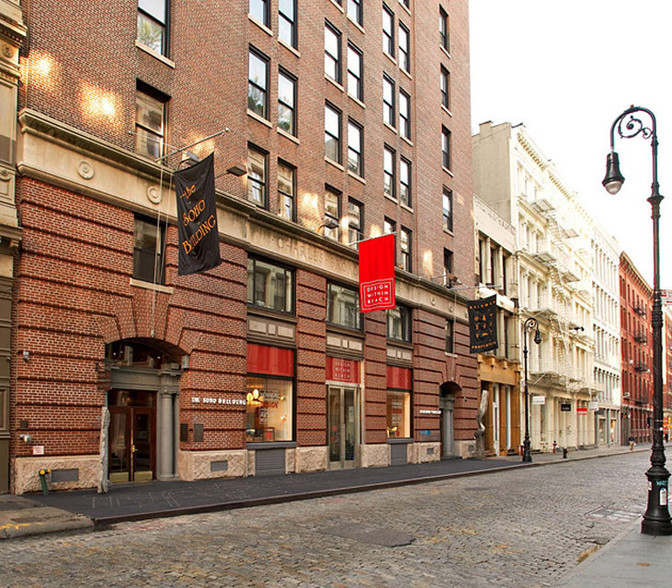 The Collective global co-living company based in New York, London and Berlin, will locate its U.S. base of operations’ in the duplex penthouse of the SoHo Building at 110 Greene Street. Comprised of 9,397 s/f, The Collective’s U.S. headquarters will occupy the top floor and penthouse level of 110 Greene Street. Alexander Golod and Neil King of CBRE represented The Collective. Elliot Karp and Jeremy Bier are the in-house leasing agents for SL Green. the building owner.

Industry City announced the addition of Lux Lighting to its roster of more than 60 tenants. Lux Lighting — which offers motion picture lighting rental, sales, and solutions for the entertainment industry — will occupy a 2,059 s/f space at the Sunset Park campus. Kathe Kramer Chase, Director of Leasing at Industry City, made the announcement.

Robert Martin Company LLC has signed a 10,000 s/f lease for a new child care center at The Elm, a new luxury rental mixed-use building located just off the Saw Mill Parkway in Elmsford. The child care center, which is expected to have its grand opening this summer, will be operated by Lightbridge Academy. The company currently has over 100 facilities either open, under construction or in development throughout the Northeast. The Elmsford location is its first childcare center in Westchester County.

RFR has completed over 50,000 s/f of leasing at 477 Madison Avenue within its first 180 days of ownership, after acquiring the property in July 2019. The leases include:

• Rivkin Radler LLP, a legal practice with more than 190 attorneys across five offices, signed a long-term lease for 14,888 s/f, representing itself in the negotiations. RFR was able to accommodate the firm’s expansion needs by relocating them within the building. RFR was represented by its in-house leasing team of AJ Camhi, Rob Weller, Ryan Silverman, Paul Milunec and Kevin West.

• Long Island Premier Physical & Aquatic Therapy signed a 10-year lease for 4,200 s/f at 58 East Sunrise Highway,Lindenhurst, NY. Chris Giacalone of represented the tenant. This site is a relocation from another space in Lindenhurst and features a brand-new therapeutic pool. Edward Gottlieb of Schuckman Realty Inc. represented the landlord.

• Great Expressions Dental Center signed a 10-year lease for 2,500 ss/f at 60 East Sunrise Highway. The tenant was represented by Alan Zuckerman. The space was formerly a dollar store and has been built into a state-of-the-art dental center. Edward Gottlieb represented the landlord.

• Royale Linens, a supplier for home textiles across North America, signed a 6,027 s/f lease at 330 Fifth Avenue. The company is a subsidiary of Yunus Textile Mills Limited based out of Karachi, Pakistan, and will be relocating from nearby 295 Fifth Avenue to an office and showroom space on the sixth floor of 330 Fifth Avenue. Alan Bonett of Adams & Co. represented the landlord, Skylar 330 LLC, while Bradley Cohn of Adams & Co represented the tenant. Asking rents were $60 psf.

• Affordable Luxury Group signed a 2,138 s/f lease at 10 West 33rd Street. The accessories company will utilize part of the sixth floor for its executive offices and a showroom. David Levy of Adams & Co. represented the landlord, Ten West Thirty Third Associates and also the tenant in the transaction. Asking rent in the transaction was $55 psf.

• Women’s hosiery and lingerie company, Horizon Imports, Inc., has signed 1,386 s/f lease at 10 West 33rd Street for office and showroom space. David Levy of Adams & Co. represented both the landlord, Ten West Thirty Third Associates and also the tenant in the transaction. Asking rent in the was $60 psf.

Hunt Corporate Services announced that LabCorp has leased 13,605 s/f at 51 East Bethpage Road, Plainview. David G. Hunt represented the landlord, Anton Cerrone Associates. Matt Manoogian of CBRE represented the tenant. LabCorp needed THE new location built out to their specifications with office, laboratory and warehouse space, as well as a truck loading dock. Construction is under way. The remaining space of 12,055 s/f is available and will be built to suit.

CBRE announced that the Morris County Chamber of Commerce (MCCC) has renewed its office lease at 325 Columbia Turnpike in Florham Park. MCCC will continue to occupy 4,420 s/f of office space at the property owned by Mack-Cali Realty Corporation. Thomas Mallaney, First Vice President at CBRE and an active member of the MCCC, represented the association in the lease negotiations. The lease renewal is for a term of 10 years.