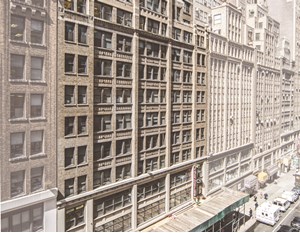 Savitt Partners announced nearly 23,000 s/f in leasing activity at 530 Seventh Avenue in the Garment District. The Savitt Partners team of Brian Neugeboren and Nicole Goetz oversee leasing at the 490,000 s/f office property and negotiated the lease transactions on behalf of the ownership. Among the new companies taking space at the property are:

• Geophy Inc., a provider of data analytics and evaluation for commercial real estate using artificial intelligence, took 3,010 s/f on the 19th floor, which will allow it to expand its employee base from 10 people to 40 in the next two years. Geophy relocated its offices from flexible sublease space at the Empire State Building. Jake Cunningham of Velocity Real Estate negotiated the lease transaction on behalf of GeoPhy.

• E.M. Rose Group, a boutique digital agency working with companies who want to build top tier technology products, services and platforms, expanded its office space less than a year after inking a 1,700 s/f lease for its NYC headquarters. The firm will be relocating and expanding to 2,800 s/f that also features a terrace with city views.

• Massive, LLC, a clothing company with music brand ambassador partnerships and festival presence which has been headquartered in the building since 2006, committed to a 2,100 s/f renewal on part of the 10th floor. Neugeboren assisted the tenant with the renewal.

• Backtrace, a technology company with an error management platform to help users pinpoint and resolve crashes and exceptions on every platform, will occupy 2,550 s/f of office space.

• Ascend Learning, a provider of technology-based educational, curriculum and assessment solutions for high-growth careers in a range of industries, will relocate its office from 1350 Broadway and will occupy 2,550 s/f of office space.

• EZOPS, Inc., a provider of artificial intelligence solutions for middle and back office operations, signed a 1,700 s/f lease on the 14th floor.

Lee & associates NYC announced that Gregory Tannor, Executive Managing Director/Principal, and Zachary Diamond, Senior Associate, negotiated a 15-year, 3,100 s/flease on the ground floor at The Greenwich Lane residential condominium at 15 Seventh Avenue, at the corner of West 12th Street, for Small Door Inc. This will be the first location for the venture capital-backed veterinary service and will be considered their flagship outpost. Small Door a medical team via a mobile app and a personalized approach to managing their pet’s health. The property owner, Rudin Management was represented in-house by Kevin Daly. Small Door is expected to open in the fall of 2019. Asking rent was $200 psf.

The New Jersey Ballet Company has committed to 16,641 s/f of space at 7-9 Vreeland Road in Florham Park, New Jersey in a lease transaction arranged by CBRE. The 60-year old dance company is expanding and relocating from Livingston to Florham Park with an anticipated occupancy of October 2019. CBRE’s Thomas Mallaney represented landlord SK Realty Management, an opportunistic real estate investment group, in the lease negotiations. Additionally, CBRE Project Management has been hired by New Jersey Ballet to oversee and manage the construction and costs during their move. The building architect, Parette Somjen, will design the new space. Built in 1979, 7-9 Vreeland Road is a 155,819 s/f building with 20-foot ceiling heights, parking and an interior courtyard. The NAI James E. Hanson team of Joshua Levering and Nick DePaolera acted on behalf of the New Jersey Ballet Company.

Charter Realty & Development announced that Scott Edlitz represented LabCorp. in a 14,190 s/f lease in Wayne. The premises are located just off I-80 on Route 23, close to the Willowbrook Mall and a two-minute drive to the Wayne/ Route 23 Transit Center. LabCorp. leased the entire property, which was previously an Indian Motorcycle dealership. This Wayne lease is the tenth transaction in which Edlitz has represented LabCorp, in both the New York and New Jersey markets. LabCorp provides medical laboratory tests and services through a national network of primary clinical laboratories and specialty testing laboratories. Its corporate headquarters are in Burlington, NC, and it has more than 50,000 employees worldwide.

NAI James E. Hanson negotiated a 600 s/f lease for the Center for Anxiety and Behavior Management, LLC, at 1 Mill Ridge Lane in Chester. Joe Vindigni, Randy Horning, and Darren Lizzack represented the tenant and the landlord, MGHC Group, LLC, in the transaction. 1 Mill Ridge Lane is a two-story, 16,000 s/frecently renovated office building situated at the corner of Route 24. Since 2017, NAI James E. Hanson has represented the building’s management in 9,250 s/f of leasing transactions with tenants such as Capstone Group, Law Offices of William Strazza, and Caristia Kulsar & Wade LLC.

AROUND TOWN: events you need to know about this week