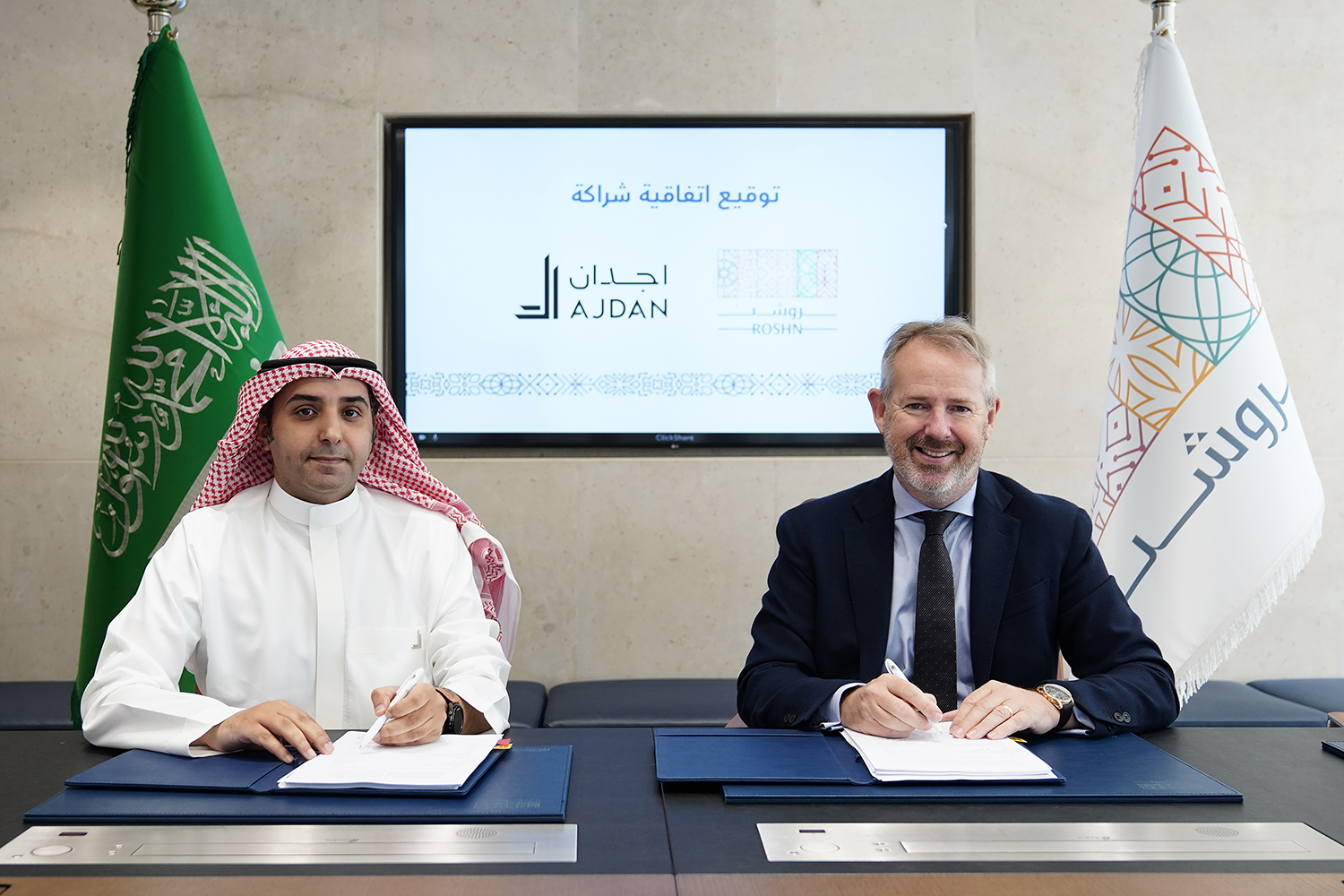 AJDAN, one of Saudi Arabia’s leading mixed- use, lifestyle developers and the company behind the highly successful and popular Ajdan Waterfront in The Kingdom’s Eastern Province, is delighted to announce its collaboration with Roshn, a PIF backed giga-project developer, to sub-develop over 270 villas within Roshn’s mixed-used community “SEDRA” in North East Riyadh. Ajdan have signed an agreement to develop and market a total of 80,754sqm plot of land within Sedra’s prime locations, which will allow it to design, build and sell modern, contemporary premium villas to ROSHN and Ajdan’s high quality standards.

Sedra, one of Riyadh’s most highly anticipated developments, will be home to over 2,100 residential units, public parks, playgrounds, entertainment areas, retail, community centers, schools, a sports hub, mosques, heath clinics, and an abundance of restaurants and cafes once completed. Located north east of Riyadh within close proximity to the main roads and south of King Khalid International Airport, Sedra’s strategic location will make it a hotspot for locals and visitors alike.

“We are very excited about our collaboration with Roshn, delivering our high-quality residences to the Riyadh community which defines us further as a leading Saudi developer of choice to have partnered with one of The Kingdom’s foremost giga- project developers.” said AJDAN’s CEO, Mr. Mohammed Abdulmohsen AlOtaibi.

“By partnering with leaders in the real estate arena, like Ajdan, we ensure that the residents of our communities have access to the best products and services that the industry has to offer. Like us, Ajdan is introducing new living experiences to the Saudi housing market, and their villas will perfectly complement our design vision of open, integrated communities supported by a world-class array of amenities,” said ROSHN Group CEO, David Grover.

AJDAN is one of Saudi Arabia’s leading mixed-use, lifestyle developers, and the leading developer in the country’s Eastern Province. Its project portfolio is currently focused on three main cities: Al Khobar, Riyadh and Jeddah—with plans on the horizon for rapid expansion into other cities and regions of Saudi Arabia.

In Al Khobar, their developments span Ajdan Waterfront (including the popular AJDAN
Walk and soon to open Fairmont Hotel), Bayfront, and now, Infiniti by Ajdan. With an emphasis on delivering high quality destinations within the Eastern Province and beyond in the coming years; expansion plans include developments in Riyadh and Jeddah to follow.

AJDAN’s birthplace, Al Khobar, has recently gained momentum as a hub of cross- functional projects that ascribe to a holistic approach. Many of these projects have already launched, with many others being under developments. Projects in the Eastern Province, such as Dharhan Opera House, SEVEN and others—position the region as a charming destination for domestic and GCC tourists.

Ajdan Walk, the first completed component of the Ajdan Waterfront development, opened in 2019 and has since proven a huge success. The now-bustling Ajdan Walk enjoys a unique location in the heart of Al Khobar and It features the first food village in the eastern province with many leading international food brands located in and around Boulevard Street. In their partnership with internally renowned architecture firm, Benoy, AJDAN created a hybrid cultural space that effortlessly integrates a premium retail, entertainment and F&B offerings with the essence of Al Khobar. The wider Ajdan Waterfront development also includes the breath-taking Ajdan Rise and Fairmont Ajdan.

AJDAN recently announced the SAR250m Bayfront project in Al-Khobar. Bayfront will be a mixed-use project located on the northern part of Al-Khobar’s beach, spanning over 100,000 square metres.