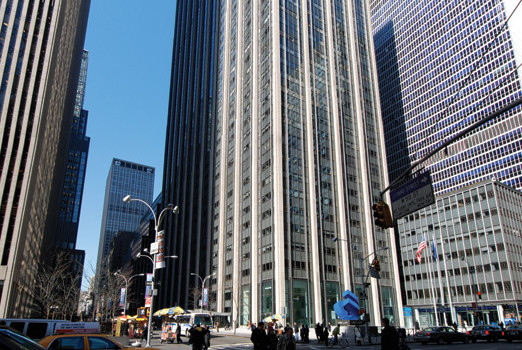 Latham & Watkins will occupy floors 25-34, with anticipated move-in during the second half of 2020. The firm plans to relocate its largest office in the firm from 885 Third Avenue.

The 48-story skyscraper is undergoing extensive renovations designed by the architectural firm Pei Cobb Freed & Partners. The project started in 2016 and is scheduled to be completed by the end of 2019.

The lease with Latham & Watkins brings the 18-month leasing total at 1271 Avenue of the Americas to more than one million square feet of the 2.1 million square foot tower. Major League Baseball and Mizuho Americas have also signed leases for space in the building.

Approximately 900,000 s/f is available for lease in the tower floors.

“We are pleased to welcome Latham & Watkins to 1271 Avenue of the Americas,” said Ed Guiltinan, Senior Vice President and Head of Leasing in New York for Rockefeller Group.

“Latham & Watkins is a pre-eminent and highly respected global law firm, and they are an outstanding addition to the building’s impressive tenant roster. Rockefeller Group is thrilled that such a prestigious law firm recognized the benefits of being a tenant in 1271 Avenue of the Americas.”

Michèle Penzer, New York Office Managing Partner of Latham & Watkins, said, “Many factors informed our decision to move to 1271, including its central midtown location, architectural significance, and top quality renovations, coupled with the opportunity to design a new office.”

First completed in 1959, 1271 Avenue of the Americas was originally designed by Harrison & Abramovitz & Harris, the architects for all of Rockefeller Center, and built by George A. Fuller Company.

In-building amenities include well-known and established restaurants including Capital Grille, Ted’s Montana Grill and Le Pain Quotidien, as well as direct access to the B, D, F and M subway lines and the shops at Rockefeller Center.