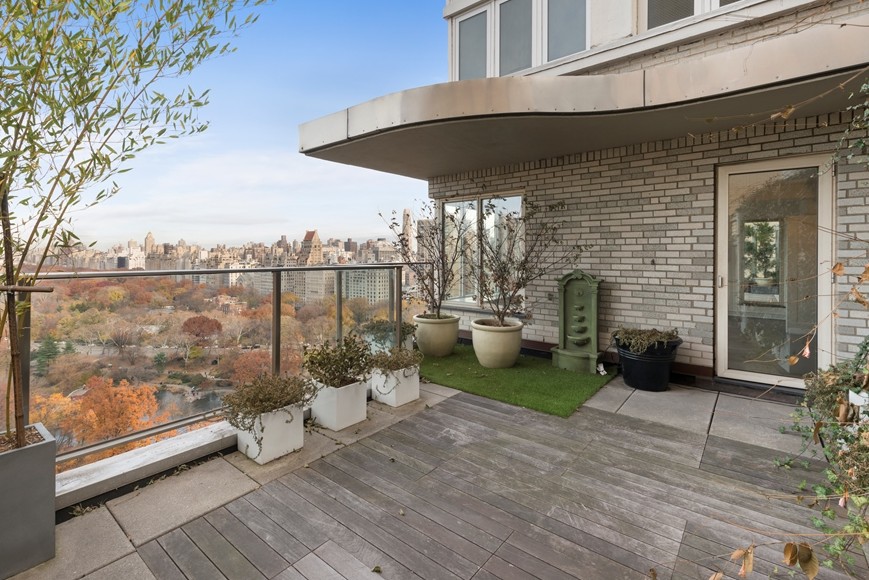 Lady Gaga has bid adieu to her “Haus of Gaga” in midtown.

The New York-born songwriter has moved out of the duplex penthouse that she leased nearly four years ago at 40 Central Park South, an 11-story, pre-war residential building owned by ATCO Properties & Management, between Fifth and Sixth Avenues. The apartment is officially back on the market at $33,000 per month, according to Merav Shalhon, director of Essential New York Real Estate, a division of ATCO, which is listing the luxury rental.

“This home is for the person seeking the ultimate in both celebrity and privacy encompassed in a premier white glove rental building on Central Park South,” she says, noting that former occupants also include Liza Minnelli and Lance Armstrong.

The 2,000 s/f apartment features two bedrooms and two full bathrooms, as well as two balconies and two terraces with panoramic views overlooking Central Park. Inside, the foyer leads to a dramatic sunken living room with a wood-burning fireplace and panoramic windows with park views. It also has a large formal dining room, a granite chef’s kitchen with top-of-the-line appliances and a washer/dryer.

Up the grand oak staircase, the apartment’s master suite features another wood-burning fireplace and remarkable views, an over-sized marble bathroom with deep soaking and whirlpool tub and an enormous walk-in closet. On both sides of the bedroom are the terraces, a total of approximately 750 square feet, with no neighbors on any side.

Constructed in 1941 and recently refurbished with the latest appliances and luxury finishes, the building has a 24-hour doorman/concierge, keyed elevator, package room and fitness center.

HAVE YOU HEARD? Little House on the Prairie star buying apartment at The Kent; Bethenny Franklin offers loft for rent