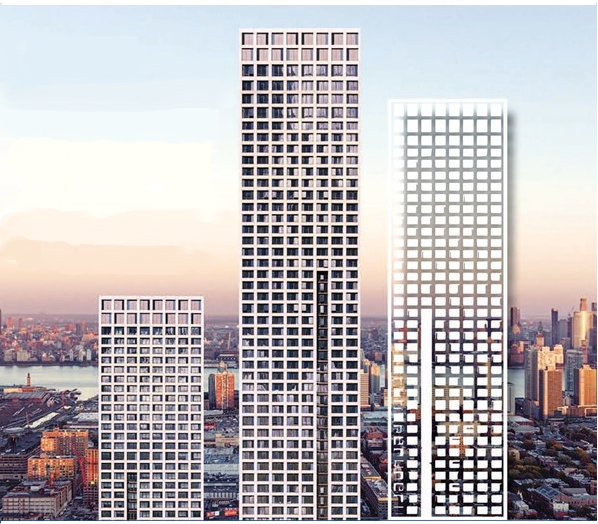 Journal Squared 2 at 615 Summit Avenue in Jersey City is a 68-story tower standing 754 feet tall and comprising 704 residences. That building shattered New Jersey leasing records after The Marketing Directors led a campaign that saw all 704 luxury apartments rented within five months of the building opening.

Developed by KRE Group and National Real Estate Advisors, the Journal Squared development is part of a construction boom in the neighborhood that will bring thousands of new apartments.

As part of that plan, the historic Loews Jersey Theater is being transformed into a $72 million state-of-the-art performance venue, and a new five-story courthouse complex designed by Rafael Viñoly Architects will include a 75-seat public food court, a self-help law library, a children’s play area, training spaces, and a 459-space parking garage. A new museum is also being developed in partnership with France’s Centre Pompidou at the historic Pathside Building at 25 Sip Avenue.

Among the developers busy in the neighborhood, Ironstate, in partnership with Panepinto Properties and Kimmel LLC, is building a second Urby tower at 532 Summit Avenue. The company’s first Urby in Downtown JC – built in partnership with Mack-Cali – was completed two years ago.

Also in the mix in New York-based HAP, which is building a 42-story tower at 500 Summit Avenue with 902 rental units, retail space and a municipal park, which will be deeded to Jersey City upon completion.

Sequoia Development and GRID Real Estate are building a 16-story tower at 289 Jordan Place with 300 rental units and 4,000 s/f of retail space; Namdar Group is behind a 20-story rental at 26 Cottage Street, one of six new towers designed by C3D Architecture the company is developing in and around Journal Square.

Located at the intersection of Pavonia and Summit Avenues with direct access to the Journal Square Transportation Center, the three-tower Journal Squared development will ultimately total 1,840 rental residences and 36,000 s/f of retail and restaurant space in 53-, 60- and 68-story buildings.

With thousands of residents living in the two completed residential towers, the development includes Whealth Kitchen, a catering company, café, and bakery owned by David Trotta and Gina Cassese serving the community out of the retail space, and a new pedestrian plaza providing public open space.