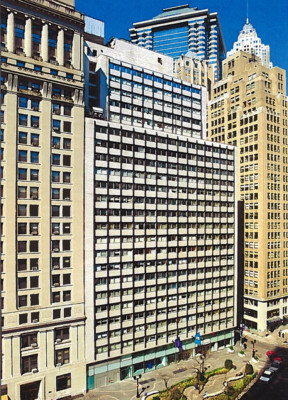 Knotel, the workspace provider, announced that it has finalized a 28,820 s/f lease at CIM Group’s 5 Hanover Square in Lower Manhattan.

“We are thrilled to be partnering with one of the country’s top owner/operators, CIM Group, at 5 Hanover Square,” said Eugene Lee, global head of real estate & business development at Knotel, commented:

“We are confident that our members will benefit from the building’s convenient and desirable location near multiple subway lines, Pier 11 Ferry Terminal, and the FDR Drive.”

Elie Reiss of Skylight Leasing represented Knotel in the transaction, while Michael Rizzo, Adam Leshowitz, and Robert Wizenberg of CBRE represented the landlord.

At 80-90 Eighth Avenue, Knotel has signed an 11,940 s/f lease encompassing the entire 5th floor of the building, which is located between 14th and 15th Street in Chelsea.

At 155 Fifth Avenue, a.k.a., the Scribner Building, Knotel has taken a 10,400 s/f lease spanning the entire 4th and 5th floors of the seven-story boutique office property.

The new Knotel locations continue the brand’s rapid expansion throughout the Manhattan marketplace.

“Our growth in New York City shows no sign of slowing down,” said Lee.

“Alongside many of our other recent partnerships with some of the city’s top landlords, these locations reflect our expansion in Midtown South, as well as a continuously growing interest in flexible office space.”

Knotel – which designs, builds and operates custom spaces for companies of 50 employees or more – was founded in New York City in 2016 and caters to established and growing brands.

It has quickly expanded nationally and internationally, with additional locations in San Francisco, London, and Berlin.

Knotel currently operates more than 80 locations, with plans to expand in existing cities, and into new markets in the U.S. and overseas. Today, over 200 companies call Knotel home.

On the Scene: Cushman tapped for 1559 York, TerraCRG hired in Prospect Heights