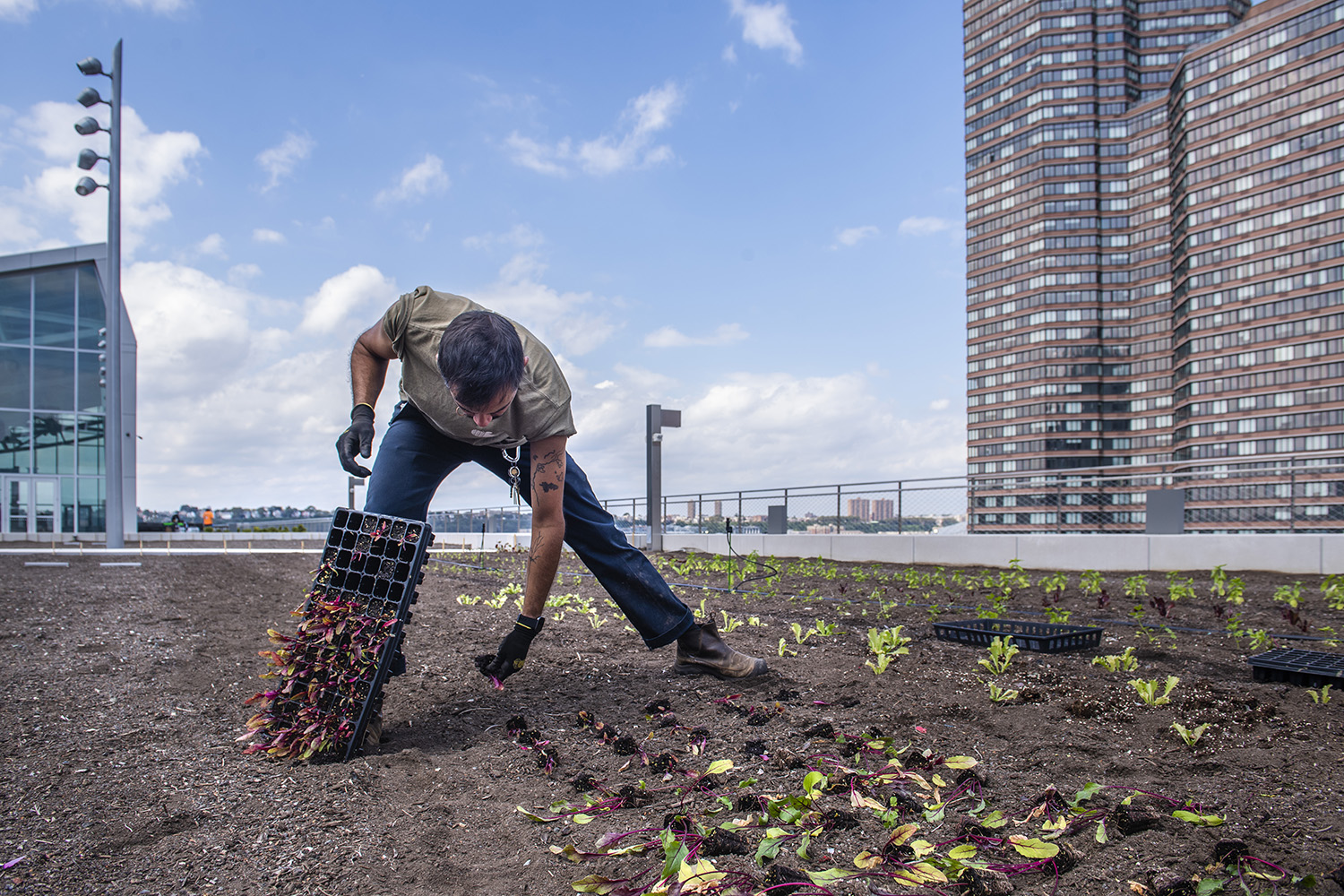 A new one-acre working farm on top of the Javits Center is expected to produce some 40,000 pounds of produce a year as part of the exhibition center’s celebrated sustainability program.

The farm, along with a 200,000 s/f rooftop event space, has just been completed as part of a $1.5 billion expansion of the West Side facility which already features a 6.75-acre green roof that serves as a habitat for area wildlife.

The expansion project, which has added 1.2 million square feet of total event-related space, is expected to draw new events to New York City and generate new economic activity among the hotel, restaurant, transportation and tourism industries. The SALT Conference, which opened yesterday, is the first event to utilize the expansion and its rooftop.

Led by the New York Convention Center Development Corporation, a subsidiary of Empire State Development, a Lendlease and Turner joint venture and architectural firms TVS, Moody Nolan, Stantec and WXY Studio, the four-year expansion project was completed on budget despite the challenges related to COVID-19.

“This new rooftop is one of the most exciting event spaces in New York City in more than a generation,” said Alan Steel, President and CEO of the New York Convention Center Operating Corporation, which operates the Javits Center. “With stunning skyline views and state-of-the-art technology, the rooftop creates a unique roof-to-table experience for our guests while enabling our staff to push the boundaries of sustainability and further explore how to improve the quality of life for our neighbors – those with wings and those without.”

“The Javits Center has set a new standard in sustainability that aligns with Lendlease’s global commitment to addressing climate change as a 1.5°C-aligned company targeting absolute zero carbon by 2040,” said Steven Sommer, Executive General Manager and President of New York Construction at Lendlease. “As an iconic New York structure, the expanded Javits Center will inspire all who visit to make their own contributions at both the corporate and individual levels as we work together to realize a greener, more sustainable future for our planet.”

“We are excited for the public to enjoy this pioneering design that exemplifies how the built environment can support the natural environment while prioritizing the health, safety and well-being of building occupants,” said Bill Barton, Construction Executive at Turner Construction Company at Turner Construction Company. “This intentional approach to sustainability in the design and build across the entire expansion has made the Javits Center one of the most cutting-edge facilities in the world.”

Highlights of the expansion rooftop include:

•          The Farm. A one-acre rooftop farm that will provide fresh produce for on-site consumption, with recycled rainwater used for irrigation; includes a greenhouse that can host intimate gatherings such as board meetings or meals for up to 25 people. Brooklyn Grange, a Brooklyn-based urban farming company, will manage the day-to-day operations of the farm and the greenhouse and work closely with members of our new dining and hospitality team, Cultivated, to direct crops to our on-site kitchens where the produce will be incorporated into meals served to clients;

•          The Pavilion. A 15,000 s/f, glass-enclosed space that can host events with up to 1,500 individuals throughout the year; adjacent to a massive outdoor terrace, along with a meadow, a shade garden and an orchard with 32 apple trees and six pear trees;

•          Solar Farm. More than 3,000 solar panels to be installed on the existing and expansion rooftops, making it the largest rooftop solar farm in Manhattan. It is expected to generate 1.7 megawatts of solar energy with an additional 3.5 megawatts of battery storage, providing the convention center with more than 2 gigawatt hours per year; and

•          Water Conservation. The installation of two underground retention cisterns helps capture and treat rainwater to be used for irrigation on the roof, reducing the need for potable water for irrigation by at least 50 percent.

The Javits Center has since reopened for events, including The Armory Show, the SALT Conference and the Nest Summit, as a part of Climate Week NYC, scheduled to open this month.

Since 2014, the Javits Center has reduced the building’s energy consumption by 26 percent, and created a rooftop wildlife habitat that serves as a home to 35 bird species, five bat species and five bee hives.

Other recent infrastructure improvements include the creation of a state-of-the-art broadcast studio for virtual and hybrid events, the installation of more than 100 stainless steel bollards along the building’s perimeter and the construction of a new three-story building that houses transformers, back-up generators and other electrical equipment for the expanded convention center.