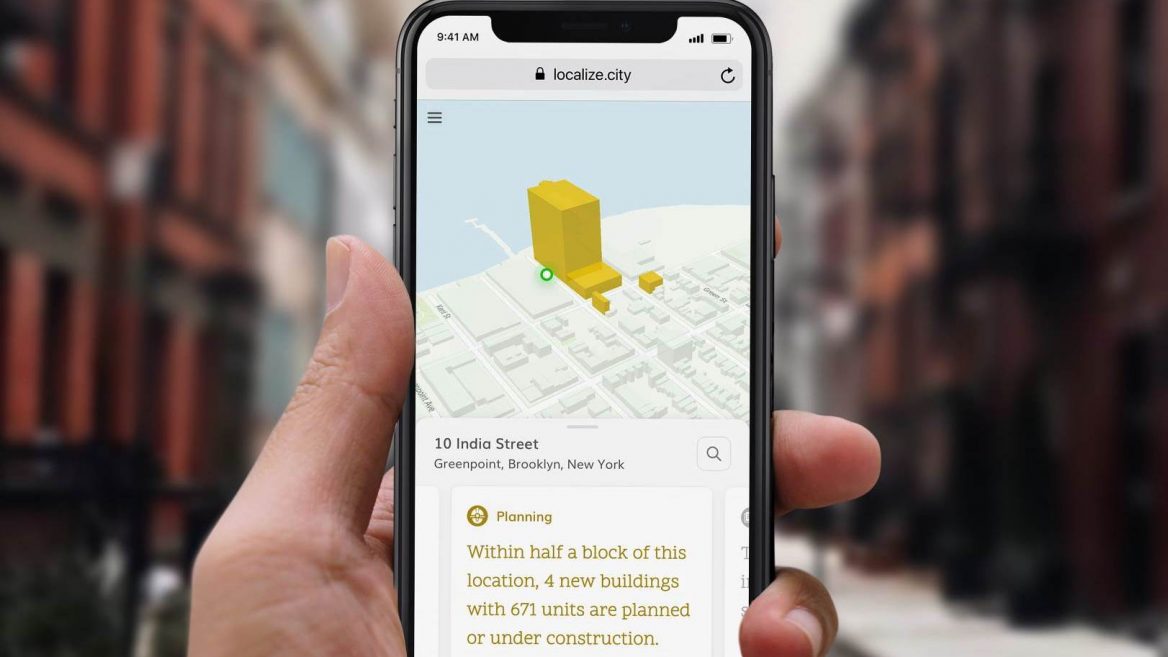 When it comes to getting between the bricks of New York City, Steven Kalifowitz has his finger on the pulse.

A one-time TV and film producer with two Emmy awards to his name, Kalifowitz is now at the helm of Localize.city, a website powered by artificial intelligence that knows the dirty little secrets of every highrise and walkup the city has to offer.

Whether itʼs bedbug complaints or shade from other buildings, school scores or transportation, Localize.city scratches beneath the surface to reveal everything there is to know about a city abode.

“There’s no broker or really anybody who’s going to be able to tell you what we can tell you about what it’s really like to live at any given address,” said Kalifowitz, a native New Yorker who was convinced to join the real estate tech start-up when it proved itself during his own property search.

After a decade working in Singapore, Kalifowitz had to move back to New York to help launch Localize in NYC. The website had been built to solve the problem of home buyers and renters choosing their homes with little knowledge of what life would be like at each address the day after they moved in, a few months, and even a few years after.

“I can honestly say that I had a similar experience with every apartment Iʼd ever owned or rented,” said Kalifowitz. “I had little to no information beyond what the broker advertised and what I could see with my own eyes when I visited the place. But neither the broker nor I were able to really create a strong sense of what life would be like at each address.

“In more than one case, not long after moving in, I realized I made a mistake. In some cases it was the streets immediately surrounding the address — noisy bars, a school around the block that had buses and kids making noise from early in the morning. In others it was the building — I lived on the first floor and the basement would flood whenever there were bad rains.”

When he was looking for a new neighborhood to call home, Park Slope was the ideal choice on paper. It was an easier commute to work, offered quality schools for his kids and was closer to his brother.

While most prospective buyers in the city will do cursory online searches to learn about the area, Kalifowitz went a step further and visited Park Slope and asked random people on the street what the neighborhood was like.

“They told me there were block parties, that it was great place for kids,” Kalifowitz said. “But you know what? Nobody told me and what I never thought to ask — no-one shovels the sidewalk here in the winter.”

Itʼs those type of tidbits in which Localize.city specializes and, despite an unconventional career path,

Kalifowitz fits in the tech start-up world like a foodie at the Smorgasborg.

After graduating NYU with a film and television degree, he began his career with HBO as a production co-ordinator working on shows such as Inside the NFL, Real Sports with Bryant Gumbel, documentaries and boxing matches as he rose through the ranks to become a manager. After 10 years in the broadcast business, he went to work for digital advertising pioneer R/GA on accounts including fashion giant American Eagle, Nike and Walmart.

In 2010, R/GA tapped Kalifowitz to launch their business in Asia and the Middle East and he uprooted to Singapore. “That was the first time I had the opportunity to launch a business, mostly from scratch,” said Kalifowitz. “There was no playbook.”

After three years in Singapore, Twitter recruited him as director of brand strategy for a new Asia Pacific and Japan division and Kalifowitz again found himself with no footprints to follow.

It was that kind of entrepreneurial experience that provided a strong foundation for his next job at Localize.city, a company founded in Israel (under the name Madlan) in 2012 by Asaf Rubin, a graduate of the elite IDF technological unit and the Rothschild Scholars Technion Program for Excellence who had headed algorithm development at Taboola.

Along with design lead Mushon Zer-Aviv, who’d designed the map experience for Waze, and a team of 60 algorithm developers, data scientists, statisticians, geographic information system experts, urban planners and appraisers, they built an information engine that has grown to 110 employees, two global offices and is now on the brink of a major US expansion.

Localize was an immediate success in Israel as users typed any address and got back a list of insights with categories ranging from transportation to education, nuisances and more. With $11 million in funding to expand his company, Rubin was introduced to Kalifowitz through a mutual friend and the two met in Tel Aviv and struck a deal for the launch of Localize.city in the New York City market.

As US operations director and president, Kalifowitz gathered his own team of data scientists and urban planners to design the Localize.city website, which launched in April. The site is powered by a proprietary AI that creates its own knowledge base by analyzing thousands of datasets in real time, including a combination of raw and complex datasets from city, state and federal government, commercially available data and studies the Localize team has independently conducted.

“We have data scientists who have their Ph.Ds in statistics and we have urban planners who understand how to read these complex documents,” Kalifowitz said of the team. “Those people help us understand what the data means and write the machine learning algorithms that create the content and draw conclusions that enable home-seekers to make informed decisions.”

While other sites can help in finding the right schools, Localize.city uses a combination of independent school reviews, latest test scores, and how parents and teachers rate the school and its leadership to give a more concise outlook.

For those looking for nearby subway options, Localize.city lets commuters know if there’s an elevator at the station and if there is planned maintenance work that might impact the station. For New Yorkers who have quit the subway, Localize knows neighborhoods that are more conducive for cyclists, how often the bike lanes are blocked and how many bike shops are in the area.

Kalifowitz said the Localize platform has been adopted by brokers who are looking to be more knowledgeable about their property, but also by those who want to offer more transparency to their buyers by including the Localize embeddable widget in their listings.

In the future, Kalifowitz said the team is working on the ability to add personal details to the insights. For example, if a user has a child, Localize.city can target insights to cover information about sidewalk width for strollers. If the user is a dog owner, Kalifowitz said they’d highlight things like pet daycares and nearby dog parks.

He said the aim of Localize.city is to allow people to become better informed when they are making a life-changing decision like buying a home and to better understand their community.

“We’re the first ones to create a real body of knowledge that’s immediately available and we use it to tell a story about every address.”