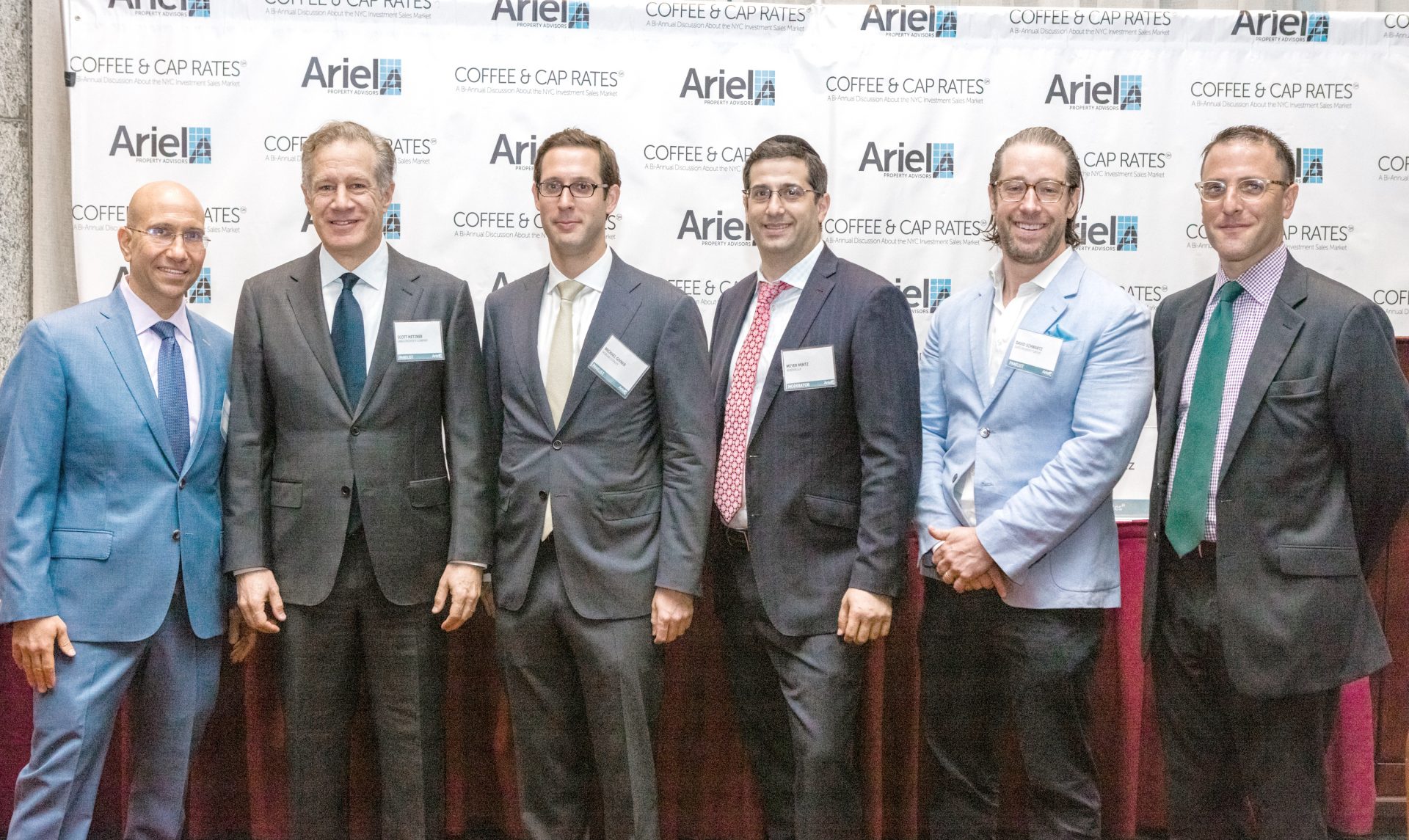 The real estate industry needs to start building bridges if it hopes to help lift New York out of its housing affordability crisis.

“We have to be less greedy and we have to acknowledge that we can’t always win and other people lose, which is the way it was perceived for many years,” said Seth Pinsky, the former head of the city’s Economic Development Corporation now in charge of RXR’s metropolitan emerging markets division.

“We also have to advocate for things that, in the short term may not even be good for us but are good for the city, and the region, and the state because, in the long run, our success depends on the success of these places, and if you want to build goodwill over time, you have to look like you care about more than just your own industry.”

Pinsky was among the panelists at Ariel Property Advisors’ Coffee & Cap Rates event last week who discussed some of the factors driving housing affordability and suggested that the real estate sector start looking at the bigger picture as the city’s success in building a 21st century economy becomes a double-edged sword when home building fails to keep pace.

“If you went back 20 years ago 15 years, you could find affordable housing in places like Long Island City, Bed-Stuy, Harlem that was just naturally occurring and that’s not around anymore so there’s a need for government to help create that housing.”

Pinksy said the underlying cause of the problem is not that there aren’t enough rent regulated apartments in New York. “We have one million [rent regulated] units and those units are now going to be even more tightly regulated,” he said.

“The problem we have is that we are just not creating enough housing period and it’s fundamentally a supply and demand imbalance that’s driving this crisis. A lot of what legislators are doing up in Albany and here in the city is actually making it harder to produce more housing, which is only going to make the crisis worse, even with all the changes in rent regulations.”

What the most successful economies of the 21st century have at their core, according to Pinksy, is a critical mass of research and development and talent creation in the applied sciences field.

As traditional centers of tech development such as Boston and San Francisco have become “tapped out,” the companies that are based there are coming to New York for its enormous reservoir of talent.

JP Morgan’s Michael Givner said that with just two million square feet of the city’s 400 million s/f of office stock occupied by life sciences, he sees “significant runway” for the sector to continue to flourish in New York.

Slate, said Schwartz, is now looking closely at the next tier, adding, “Students that are going to the universities here and [the private and public sectors] spending all this money building places like Cornell Technion; if you lose all that talent, that’s what hurt San Francisco and Boston — people just can’t afford to live there and that‘s something we have to look at, to make sure that the talent that we train, the reasons that companies want to come here, can afford to live here.”

Since joining RXR in 2015, Pinsky has directed the developer’s metropolitan emerging markets division, confronting the challenges of both community and political opposition to development in the face of studies that have identified massive swathes of under-utilized land, particularly around transit hubs, where hundreds of thousands of new units could be built at so-called market rate rents that are affordable by New York City standards.

“Even the smell of density or urbanism was immediately opposed by urban voters,” said Pinsky of his early days in the post. “But what’s been happening over the last couple of years is that the suburbs of New York have had a very hard time maintaining two demographics; young professionals and empty nesters, both of whom have been moving into central urban areas. As a result of that, they have had a hard time attracting businesses that are looking for that workforce and so what you’ve had occur is that the tax bases in the suburbs have been flat or declining while their expenses continue to rise.”

In fact, ten of the counties with the highest tax burden in the country are now in the suburbs of New York City.

In order to reverse this trend, communities such as New Rochelle, where RXR worked with the city to re-zone 300 acres of land for development, are beginning to realize is that they need to start attracting that workforce back, which means creating the kinds of communities they are looking for, according to Pinsky.


The goal, he said, is to create active, walkable downtown communities with shops and restaurants. The secret, he said, is to do it with the local cultural institutions, politicians and communities on your side and creating job training programs that bring benefits to the people that already live there.

“The hope is that if you get a critical mass of residents and you build that vibrant and diverse street life then, eventually, you can attract the businesses and commercial activity which is really where you start to get the virtuous cycle that the outer boroughs have seen.”

With New York’s population, employment and visitor numbers all at record levels, it’s not just NIMBYism that’s disrupting development though.


Veteran developer Scot Metzner, principal of Janus Property Company, said, “Immigration policy has been a huge part of the growth of New York City since its inception. Anyone who touches our world of construction now feels that lack of labor force, whether it’s unskilled up to skilled labor which has traditionally been filled by immigrants, and this is something our industry should also get behind.”

The booming e-commerce sector is creating problems for builders, too. Explained Schwartz, “We used to be able to buy the industrial space and multifamily was always the highest and best use. Now it no longer is because as [ecommerce] has gobbled up a lot of industrial space, the numbers have gone up and made it harder to buy for multifamily.”

Competition across the board has pushed land and property prices to levels that don’t make sense to a for-profit developers and layers of government bureaucracy, rules and regulations demand time, effort and resources that add more cost to any project, the panelists said.

Recent power outages, dilapidated public transport and “third world” airports are also a side-effect of the pressure the city’s 21st century economy is placing on its infrastructure.

Here, Mentzner said, is where the industry can help itself. “Our industry has done such a poor job of promoting real estate in general and multi-family affordable housing development in particular and what a driver it is for the New York economy. As an industry, we need to do a better job of getting our ideas out there because the affordable housing crisis is not going to be fixed by the people who brought us NYCHA, or subways, or jails, or public education. It is going to be solved by our industry.”

When Janus decided to turn the former Taystee Bakery building in Harlem into a life science hub, Metzner said he thought it was “good business” to involve the local community.

“We reached out to everyone from tenant activists to locally based non for profits, artists, small business, public housing, and we tried to build bridges. We are connected to these types of groups in our neighborhood and, as an industry, we need to figure out how to do that. We are not responsible for gentrification, which is now considered a bad thing, for growth, which is now considered a scary thing. These are complicated policy issues and we are part of the solution, I don’t’ believe we are the problem.”

Pinsky said that hostility to growth and development “is partially our own fault.” He explained, “We have done a very poor job of explaining why growth is important, but I also think that a lot of things that the real estate industry has done over the last several years has been too self-interested. I think it is time for the real estate industry to get back into the business of thinking about what’s good for the city being good for the industry.”

By getting the people on its side the industry can move the goalposts, according to Schwartz, who called recent voter turnout “abysmal.” He added, “It’s easy to say ‘Your rent is high because they are greedy landlords.’ When you have a simple message like that, it’s easier to demonize one group.

“By changing that and doing a better job of explaining to the voters that real estate is not responsible for this gentrification and explain to people that we are creating jobs, building housing, if we can explain that, I think things will change over time.”

And while he doubted the new rent regulations would be reversed, Pinsky said, “I can imagine, over time, people will come to realize that this law went too far and, in fact, is harming the tenants in some way that it was meant to protect. In order for our message to get through, we have to build bridges to other communities. It can’t just be the real estate industry pushing policies on its own.”

A pessimistic Metzner, however, said, “If you look at the Amazon decision, there was no sentiment from the people who were against it, that maybe this was a mistake, maybe there’s a way to fix this or make it better. It was ‘We showed the man.’ And my feeling is that this legislation is a similar thing. It’s not based on policy. It not based on we may have overshot. It is ‘We’re in charge now and we’re punishing you’.”