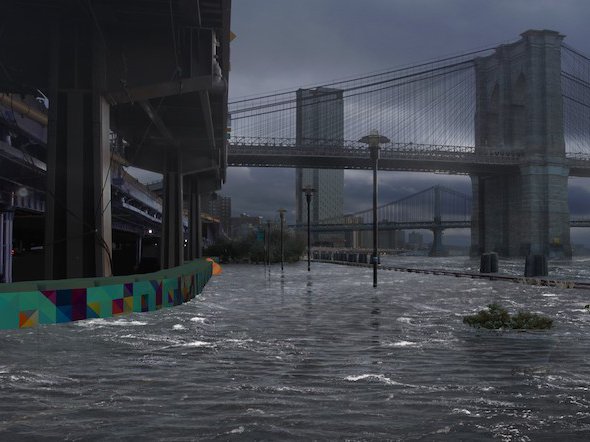 Mother Nature has sent New York a haunting warning to confront climate change or risk all, the city’s mayor said today after Hurricane Ida sucker-punched the tri-state with deadly flash floods that claimed at least nine lives and brought the city to its knees once again.

“This is the biggest wakeup call we could possibly get,” said Mayor Bill de Blasio. “We’re going to have to do a lot of things differently and quickly.”

Hochul – who said President Joe Biden had guaranteed in a phone call to her that he would get emergency disaster relief money flowing to New York – said the city had been caught off guard by flash flooding caused by the record-breaking 7.19 inches of rain that fell overnight.

“After Sandy, we built back resiliency, our coastal shorelines are in much better shape than they had been, but where we have a vulnerability is in our streets … where the flash floods – which were unknown before – this is the first time we’ve had a flash flood event of this proportion in the City of New York and in the outlying areas,” said the newly-appointed governor.

“We haven’t experienced this before, but we should expect it the next time, and that means we have to continue investments in infrastructure … so we can take care of the drainage shortcomings in our streets because when the streets get flooded, what happens next? The water rushes down, not just through the highways, but also finds its way to penetrate our subway system, and as a result, what happened yesterday, trains were shut down, people were stranded.

“The fear that they must’ve experienced when this occurred, I cannot imagine, and I don’t want this to happen again.”

Latest official reports put the death tool at nine, including a two-year-old boy who drowned with his parents in the basement of their home on 64th Street in Woodside, Queens, and an 86-year-old woman who was found dead in her basement apartment on 84th Street in Elmhurst as torrential rain pounded the city shortly before midnight.

The number of deaths is expected to rise after subway lines throughout the city became submerged, roads became rivers and homes buckled under the pressure of catastrophic flooding. Two people were killed when a building partially collapsed in Jamaica, Queens, and the FDNY recovered two more bodies found floating in the back yard of the house on Peck Avenue in Queens.

On the subway, the FDNY rescued dozens of people stuck on subway trains while others poured through the emergency exits to try to reach dry land.

Mayor de Blasio had declared a State of Emergency banning all but emergency vehicles from the roads shortly before midnight Wednesday. Many roads, including the Major Deegan Expressway, remain closed after the flash floods turned them into a sea of floating vehicles. Thursday morning, NYPD Commissioner Dermot Shea said a flood victim was found in the backseat of a car that was involved in a crash on the Grand Central Parkway.

Con Edison crews had restored service to approximately 8,265 customers who lost power overnight as the remnants of Tropical Storm Ida swept through the region.

The company is still working to restore power to the 21,096 customers who remain without service, including 17,045 in Westchester. Restoration work remains hindered by floodwaters, the utility said earlier today after hiring some 500 outside contractors to help in the restoration efforts.

The sudden and devastating havoc wrought by Ida has brought climate change to pandemic proportions in New York City, where the memory of 2013’s Hurricane Sandy – which killed 44 and caused billions in damage – has been faded by new crises like COVID-19.

But as cataclysmic weather rips across the globe and experts predict rising sea levels could submerge entire cities by the year 2100, New Yorkers are once again focused on the here and now.

“We are not presented with options. We have only one choice – urgent, daring action,ˮ Mayor de Blasio told the UN Climate Change Summit shortly after he took office in 2014. Painting a bleak future for the city and a complacent population, he said then, “We know humanity is facing an existential threat. The cause is us — how we heat our homes, how we transport ourselves, the reckless way in which we live.

“This is an issue we all face. No one is spared. And our mutual need to survive should instill in us a kind of unity we so rarely experience.ˮ

While New York has instituted monumental changes since Sandy, bickering continues to plague the path forward.  At this morning’s press conference, the politicians pointed to President Biden’s $1 trillion infrastructure bill that the Senate has approved to fund a myriad of infrastructure projects across the US.

That Act is part of a “two-track” legislative strategy to enact the President’s $3.5 trillion economic agenda. That is part of the budget reconciliation bill and would fund domestic social programs, like expanding child tax credits and mitigating climate change.

But even though the Senate-passed infrastructure bill has been sent to the House, it is unlikely there will be any vote until the Senate also approves the budget reconciliation bill where wide gulfs remain on both sides about where and  how the money will be spent.

“We don’t just build infrastructure, but we build resilient infrastructure, so when these floods or fires or anything else occurs, they are much more resistant. You saw some results of that from the Sandy money, but we need much more of it, and these bills do that. Woe is us, if we don’t recognize these changes are due to climate change. Woe is us if we don’t do something about it quickly, both in building resilient infrastructure and going to clean power, whether it’s in homes, in electricity, and transportation to stop the global warming or at least reduce its awful effects on this country.”

The real estate industry, which is often at loggerheads with the mayor over his climate-focused infrastructure efforts and New Green Deal codes that come with a hefty bill for property owners, is on the same page.

James Whelan, president of the Real Estate Board of New York, said, “Last night’s unprecedented flooding was yet another reminder of why Congress must swiftly pass a federal infrastructure package and why the private sector and public sector at all levels of government must continue collaborating to address the ongoing damage and threat posed by climate change. Prioritizing comprehensive investments in flood resiliency measures will play a critical role in protecting New York City’s millions of residents, their homes and the economy now and in the years to come.”

Carlo A. Scissura, president and CEO of the New York Building Congress, said, “[Last night] we saw frightening images of people trapped in flooding subway stations, on streets and highways and on buses in every corner of this city.

“Getting home should never be a life-or-death situation, but because climate change continues to worsen storms and our crumbling infrastructure is only getting older and more dilapidated, events like last night will sadly remain a part of our reality.

“The House of Representatives should act ahead of its September 27 deadline to pass the $1 trillion infrastructure package approved by the Senate, because New York City cannot wait any longer to make these life-saving investments.”