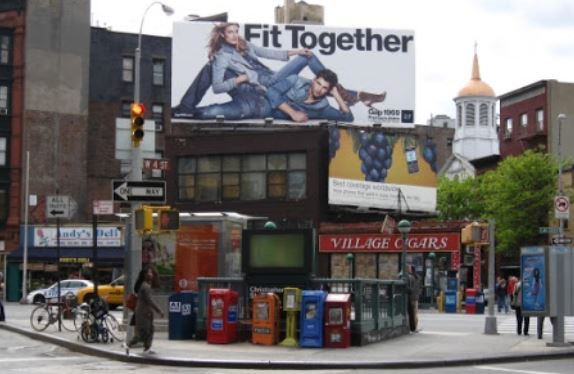 The owners of the iconic Village Cigars building in the West Village are planning to sell the vintage property that includes the famous Hess Triangle once considered the smallest piece of private land in Manhattan.

Originally built in 1905, the single-story retail building has stood as a permanent reminder of New York of old, perched on a corner of Sheridan Square where Christopher Street runs into Seventh Avenue.

Before Village Cigars moved there in 1922, it had been the site of an apartment building that was seized from owner David Hess in an eminent domain proceeding to make way for a subway expansion. Hess ultimately had to give up the building, but an administrative snafu left him with a 3.5 s/f triangle of land that he refused to give up.

Instead, he paved the tiny piece of Manhattan with subway tile and had it inscribed: “Property of the Hess Estate Which Has Never Been Dedicated For Public Purposes.”

According to public records, in 1938, the Hess Estate sold the triangle to The Village Cigar store for $1,000 – about $2 per inch – and it was wrapped into the lot that is now known as 110 7th Avenue South. It is still there today, along with the shop and an assortment of billboards.

With the COVID pandemic decimating the city’s retail landscape, the billboards are probably more valuable than the building at this point. However, sources say the property is likely to be offered at around $5.5 million.

It is currently owned by an LLC managed by Jonathan Posner, whose late father Bernard Posner ran Bernard-Charles Real Estate, and Village Cigars occupies the space on a month-to-month lease.

A lifelong Village resident, Mr Posner told Real Estate Weekly, “I obviously I take great pride in owning such a historic piece of Greenwich Village, but I have other properties in the neighborhood that still have very decent income even now, so really, this building should be in the hands of a user and/or someone who can re-love it and perhaps is enamored with the idea of owning one of the most famous corners in Manhattan.”

He said the ownership group has yet to retain the services of a broker, but noted, “The pandemic has detrimentally impacted the property’s retail income and the expense of operating the building continues unabated. We believe the property really requires a fresh new approach.”