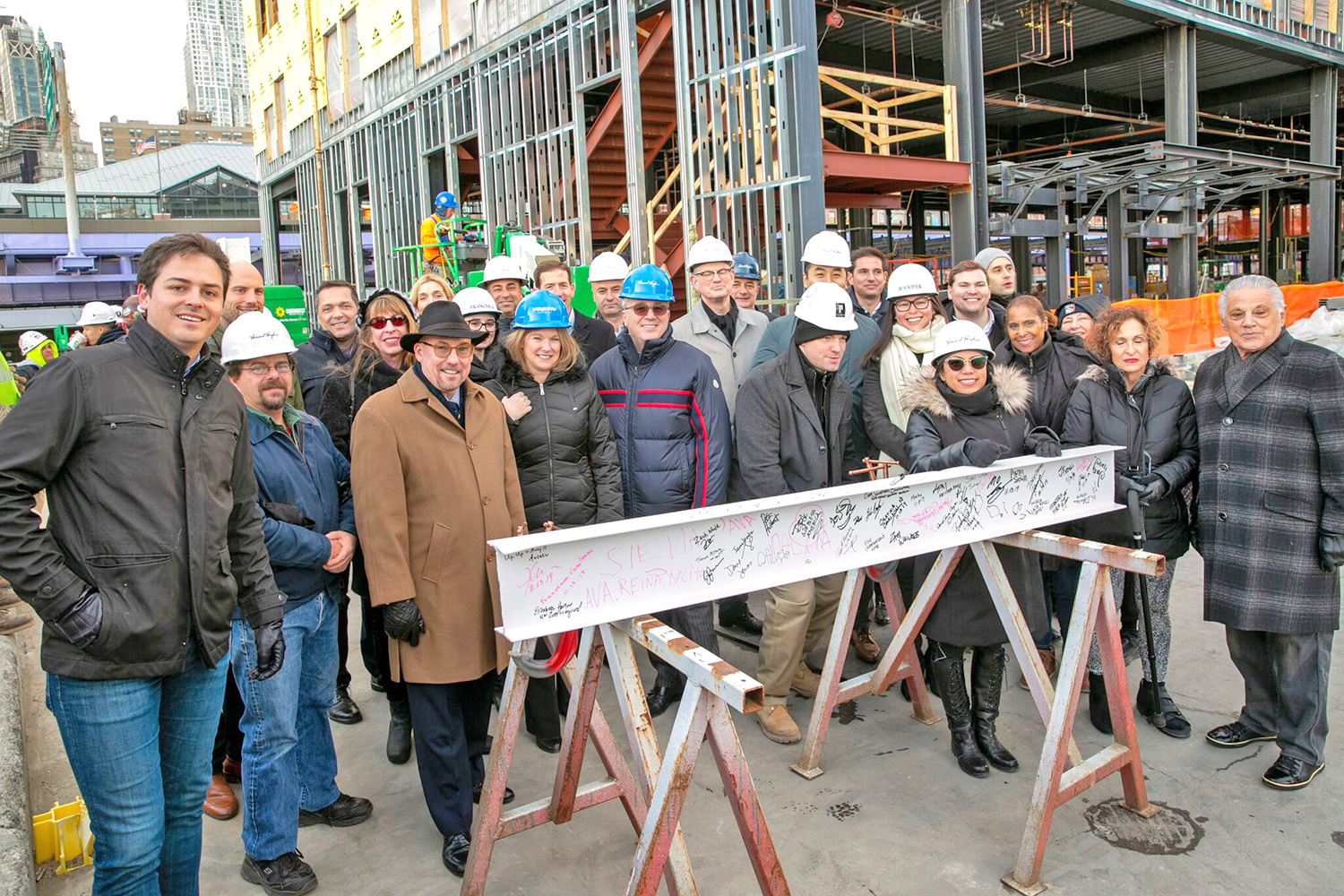 The Howard Hughes Corporation celebrated the topping out of the historic Tin Building in the Seaport District at Pier 17.

The event included the symbolic raising of the building’s final structural beam and a special “giving back” donation to the local nonprofit The Bowery Mission.

Remarks were made by guests including Matthew Washington, Manhattan Deputy Borough President; and David Jones, President and CEO of The Bowery Mission; and Saul Scherl, President of the New York Tri-State Region of The Howard Hughes Corporation. Through a video message, Jean-Georges Vongerichten welcomed guests and said he looked forward to working with the local schools and hosting students and their families at a preview visit to his kitchen at the future food hall.

In 2016, The Howard Hughes Corporation (HHC) partnered with Vongerichten to plan a relaunch of the Tin Building as a 53,000 s/f food hall incorporating aspects of the best international food experiences into an authentically New York environment.

In May 2019 at the Seaport, the chef also opened The Fulton, the acclaimed waterfront restaurant at Pier 17 adjacent to the Tin Building.

The topping out of the new Tin Building brings the project a significant step closer to completion — one which preserves the unique identity of the historic building while providing a more sustainable structure, enhanced public amenities and expanded access to the waterfront.

Set to open in 2021, the new Tin Building will house many culinary options and opportunities to enjoy the waterfront location outside on the terrace, along Pier 17, and throughout the district.

“It is great to see new life coming back to the Tin Building,” said Matthew Washington, Manhattan Deputy Borough President. “After the fire in the 1990s and the relocation of the old Fulton Fish Market, the area was abandoned for years.

“The whole process from demolition of the decrepit former structure to the rebuilding of the pier was delicate and has taken time, but to be able to bring a food hall and a market back to the area is really a special opportunity.”

Before turning to the recreation of the building, HHC began a complete reconstruction of the entire pier on which the Tin Building sits, a process which called for the demolition and reconstruction of all existing pier structures, including the use of new concrete and steel piles underneath the water.

Only once the pier was rebuilt did the transfer of the Tin Building structure itself take place, which included the building being moved 32 feet to the east and being lifted six feet above its original location to what is now one foot above the FEMA 100-year floodplain.

It has included the storage, cataloging, repair and refurbishment of roughly 300 items from the original building for historical reference and reuse. The topping out follows the recent reinstallation of the original west canopy steel, dating back to 1907.