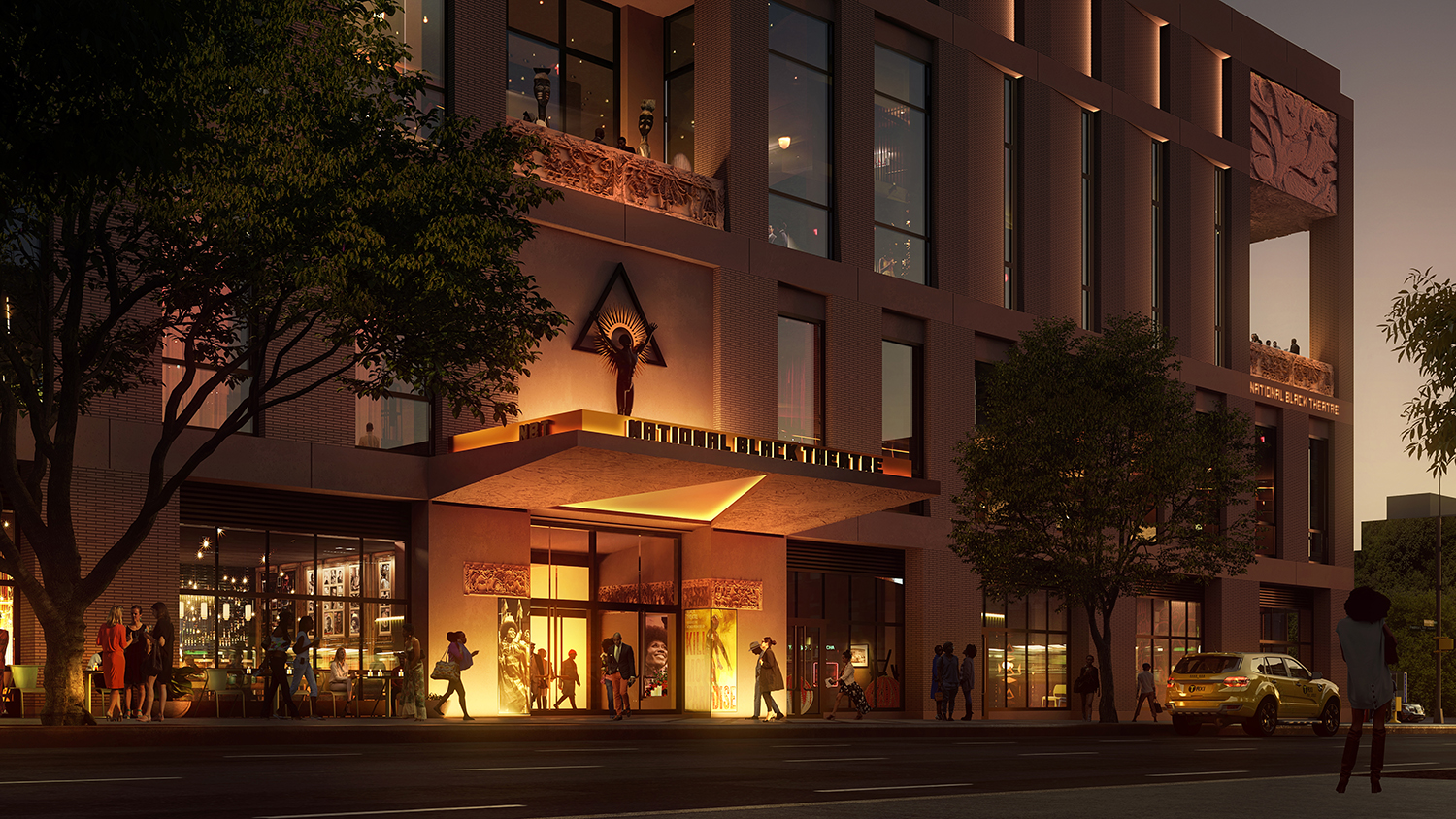 National Black Theatre (NBT) announced today it has begun construction on the long-awaited, state-of-the-art, permanent home for the venerable Harlem institution at the intersection of 125thStreet and Fifth Avenue. The 21-story project is being developed in partnership with LMXD and RAY. In addition to NBT’s multi-floor space, the plans will include 222 units of mixed-income apartments and substantial commercial space along 125th Street, as well as a multi-purpose communal living room open to the community. This project will ensure that the longest-running Black theater in New York City continues to serve as a vital resource for artists and entrepreneurs, and for the production of work that is rooted in the imagination of contemporary Black voices, challenging the mainstream.

Sade Lythcott, CEO of National Black Theatre, praised her mother’s wisdom. “It takes vision and a visionary like my mother, Dr. Barbara Ann Teer, to see into the future and what might be possible today. Buying this city block in the ‘80s ensured that National Black Theatre and Black artists from around the world could experience what home truly feels like. She understood the catalytic impact of marrying arts & culture with ownership to ensure a permanent presence within the ever-changing landscape of our community.”

Designed by Frida Escobedo Architects and Handel Architects, the new project is especially notable for being the first to utilize the City’s Visual and Performing Arts (VPA) bonus, specifically designed by former New York City Council member Inez E. Dickens.  First of its kind, this VPA empowers the New York City Department of Cultural Affairs (DCLA) and the Department of City Planning to work with a local arts advisory council as part of a 2008 comprehensive rezoning, to spur revitalization and sustain the cultural growth of Harlem-based organizations in concert with mixed-income development along the historic 125th Street corridor.

“Dr. Teer fervently believed that NBT can serve as a model of Black Liberation in service of human transformation,” says NBT’s Board Chair Michael Lythcott. “Today we are not just breaking ground on a building, but on a dream that artists can live, work and serve within their own community; a promise and commitment to our community for more than a half century that Harlem will remain the cultural capital of the Black world.”

Founded in 1968 by Dr. Teer, an award-winning performer, director, entrepreneur, and a champion of the Black Arts Movement, NBT broke boundaries from Day One, becoming the first revenue-generating Black arts complex in the country; later included as a part of the permanent collection of the Smithsonian Institution National Museum of African American History and Culture, and the recipient of a special Obie Award.

“National Black Theatre is an oasis; a place where the Black experience is re-woven, re-told, and re-imagined as a source of our redemption and collective healing,” says NBT Board Member, Van Jones. “I speak for the entire board when I say, we could not be more excited to see the advancement of Dr. Barbara Ann Teer’s vision commence, on this momentous occasion of breaking ground on the theater of the future. It will ensure Black Artists and makers continue to have a home rooted in our salvation and liberation.  A place where Black stories and storytellers can continue to seed change.”

Throughout the decades that followed, the theater has become an important cultural anchor, showcasing authentic, intersectional stories about the Black experience, written, and told by transformative voices that have helped to shift the inaccuracy around African Americans’ cultural identity.  Under the leadership of CEO Sade Lythcott and Jonathan McCrory, Executive Artistic Director, the integrity of NBT’s mission has been maintained, helping reshape a more inclusive American theater field by providing an artistically rigorous and culturally sensitive space for artists of color to experiment, develop and present new work.

In the interim during construction, NBT’s Beyond Walls initiative will continue to uplift Black narratives in myriad ways: outdoors, online, and in partnership with peers such as Apollo Theater, New York Philharmonic, New York Theatre Workshop and The Public Theater – The latter two of which are currently running performances of Dreaming Zenzile and the Pulitzer Prize-winning Fat Ham, respectively.

“This moment is a moment of reclamation as the ground breaks on our historic site, a new home that NBT will claim. NBT is similarly breaking new ground creatively as we share locally, nationally, and internationally the principles and theory of change that made and make National Black Theatre so special and unique,” declares Jonathan McCrory.

“The National Black Theatre is born from and for revolution — revolution in culture, theatre, and the arts.  This space has been and will continue to be the home of intentional innovation, radical imagination, and a deep and tender care for the community it reflects, is inspired by, and serves,” says Board Member Cleo Wade, Capital Campaign co-chair. “Today we break new ground for groundbreaking ideas that will provide an everlasting gift for generations to come.”