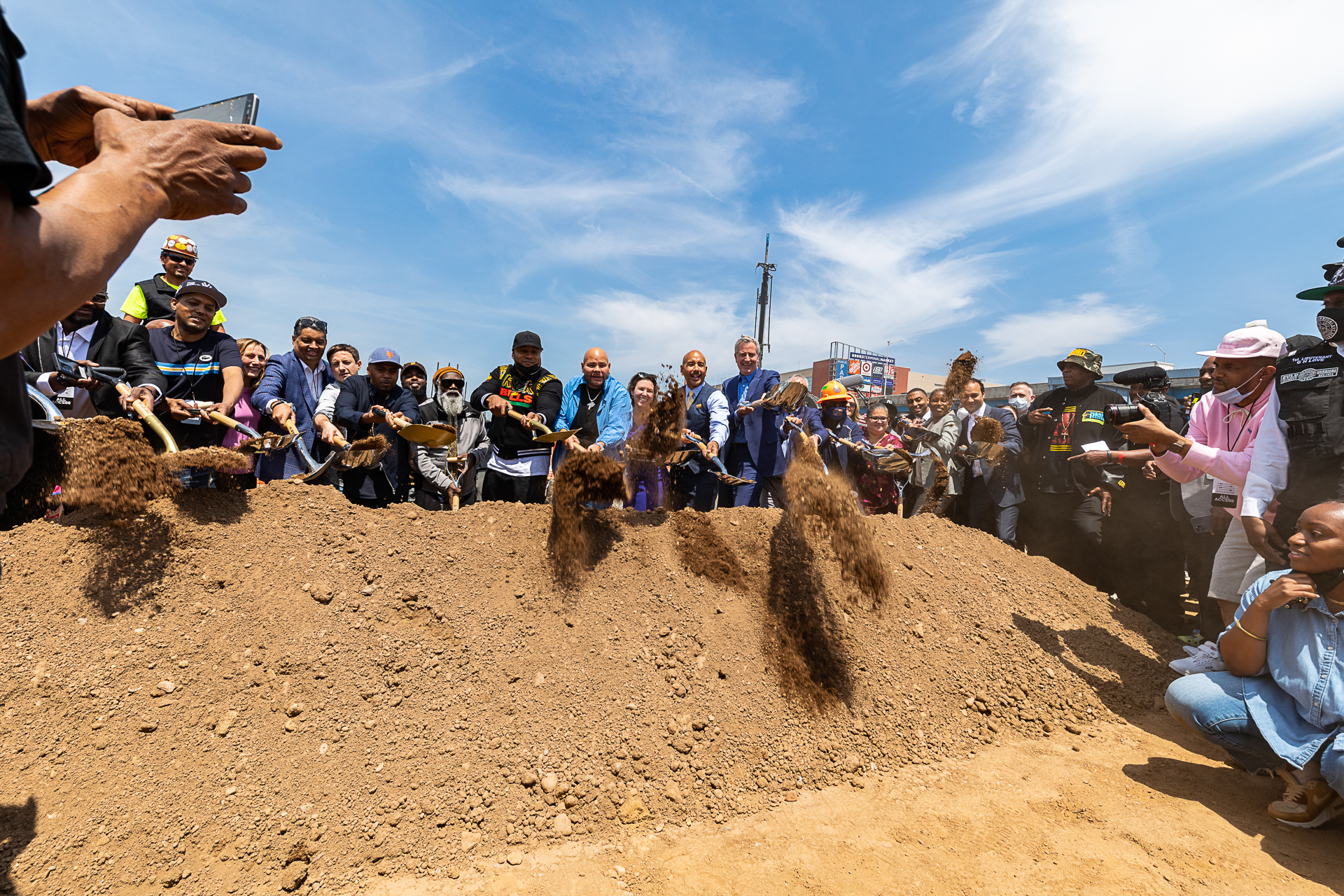 The hoi polloi of the New York hip hop scene turned out to break ground for Bronx Point, an apartment development that will include a permanent home of the Universal Hip Hop Museum.

The $349 million mixed-use project at 50 East 150th Street in along the Harlem River waterfront in the South Bronx is being developed by L+M Development Partners and Type A Projects.

The Hip Hop Museum will be just one of several cultural and community-focused spaces included in the development, which will also have an early childhood space run by BronxWorks and and outdoor science programming run by the Billion Oyster Project.

S9 Architecture led the design of the 22-story project, and the open space was designed by Marvel in collaboration with Abel Bainnson Butz. Phase one of Bronx Point is expected to be completed by late 2023.

The event also served as the official launch of the Universal Hip Hop Museum’s capital campaign. The UHHM will celebrate and preserve the history of local and global Hip Hop music and culture past, present, and future, and is slated to open in Bronx Point in 2024.

At the groundbreaking, Bronx Borough President Ruben Diaz Jr. announced that he would contribute $4.2 million from his office’s capital budget to support the Universal Hip Hop Museum’s capital campaign, which is one of the largest single funding allocations of the borough president’s tenure.

“New York City is building a recovery for all of us, and that starts with transformative projects like Bronx Point in the heart of the Bronx,” said Mayor Bill de Blasio. “From major investments in affordable housing, to a permanent place to celebrate the music that has made the Bronx famous around the world, this project demonstrates what every real New Yorker already knows: there’s no stopping New York City.”

“Bronx Point is a complete reimagining of a dormant, underutilized piece of waterfront property that will create new affordable housing and long-anticipated amenities for the entire borough to enjoy, and I am proud to be a part of it,” said Ron Moelis, CEO and Co-Founder of L+M Development Partners.

“The project will provide new open space with access to the Harlem River, a permanent home for the Universal Hip Hop Museum and community programming with Bronxworks and the Billion Oyster Project. Bronx Point represents the best type of development a public-private partnership can offer our city, and I am thrilled that we have taken the first step towards enacting our vision for this project today.”

Ann Tirschwell, Partner at Type A Projects, added, “With the delivery of this collaborative and award-winning design, we hope to provide more equitable access to the waterfront for all New Yorkers, regardless of zip code.”

“Hip Hop music and culture has been a source of inspiration and innovation since its outset,” said Brad Smith, President of Microsoft. “We’re incredibly excited for the museum’s groundbreaking and look forward to using Microsoft technology to help document, preserve, and tell the story of Hip Hop when the doors officially open.”

“The heartbeat of Hip Hop culture will live at Bronx Point, the future home of the Universal Hip Hop Museum,” said Rocky Bucano, Executive Director of the Universal Hip Hop Museum. “Documenting, preserving, and presenting the history of the culture for generations of Hip Hop lovers globally via exciting new tech innovations from Microsoft is thrilling. This partnership is truly a milestone for Hip Hop culture.”

“Hip hop has become a global art form, but it could have only started right here in the Bronx,” said NYC Department of Cultural Affairs Commissioner Gonzalo Casals. “The diversity of New York City and the vitality of the communities of color in the South Bronx gave rise to hip hop, and made it into a powerful form of expression. It’s fitting that we honor that legacy here with the Universal Hip Hop Museum, which we’re proud to support as part of this major new development.”

In Phase One, Bronx Point’s apartments will be available for families earning between 30 percent to 120 percent of Area Median Income, along with apartments for the formerly homeless. Apartments will include 135 studios, 192 one-bedrooms, 122 two-bedrooms, and 93 three-bedrooms.

The project’s second phase is anticipated to include additional housing units along with additional retail and community space. When complete, Bronx Point will include up to 1,045 apartment units.

A grand staircase, designed to be a civic gathering space for the borough, will lead from the building itself down to the waterfront. The open space, across from Bronx Terminal Market, will feature a playground and landscaped area adjacent to the existing Mill Pond Park and the Bronx Children’s Museum to the north. An esplanade along the Harlem River shoreline will include a landscaped public walkway and seating areas. The space will also feature lawns, waterfront lookouts, an extended BBQ area, fitness zones for adults and publicly accessible bathrooms.

In all, the 530,000 square foot-Bronx Point will include more than 56,000 square feet of educational and community space, along with more than 12,000 square feet of retail space. The Prusik Group, L+M’s partner on Essex Crossing on the Lower East Side and the new National Urban League Headquarters in Harlem, will serve as the project’s Retail Development Advisor.

Bronx Point is a key component of a $194 million capital investment strategy for the Lower Concourse neighborhood, announced by the de Blasio Administration in 2015 and led by NYCEDC.

Photos by Sylvester Zawadzki; Renderings via S9 Architecture and Marvel.