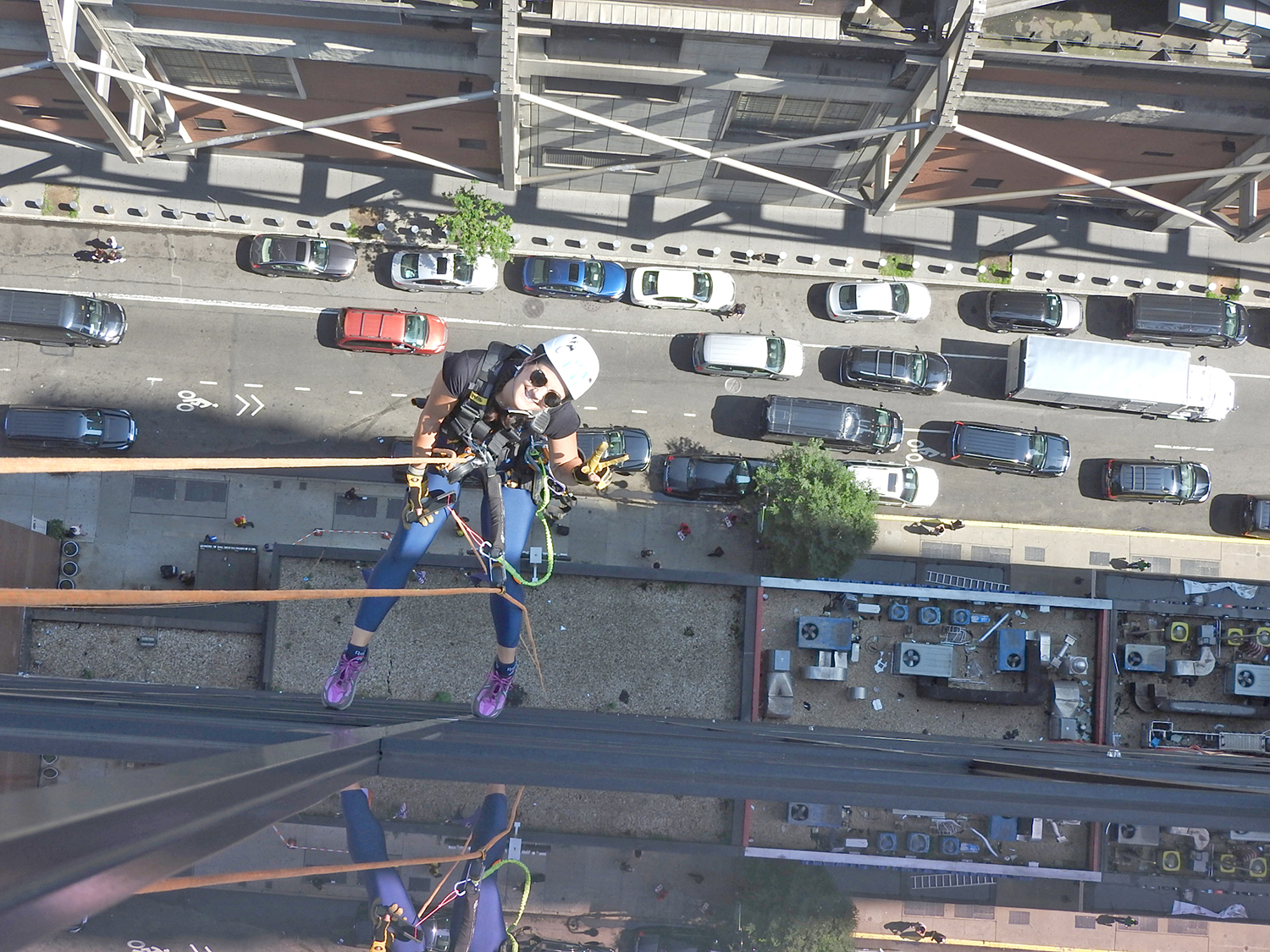 Out of roughly one million buildings in New York City, 14,500 are over six stories. Thanks to a local law enacted in 1980 after a passerby was killed by falling masonry from one of those buildings, structures taller than six stories must have their exteriors inspected every five years.

Historically, professionals who do these inspections have had to do so while perched upon scaffoldings or fire escapes or some kind of construction vehicle lift.

But in recent years, a newer approach to façade work has been introduced, in which inspectors, hoisted up by a rope, scale buildings platform-free, swinging pendulum-style to get as good of a look as possible at the property.

This method, called Industrial Rope Access (IRA) has been gaining popularity throughout the industry because often it eliminates the need for a scaffolding below.


Additionally, it can allow for a more thorough inspection than one might get from a fire escape or scaffolding that offers only a limited view of the property. The IRA process is also generally cheaper than the aforementioned inspection methods, according to CANY, an architectural and engineering firm that regularly gets called upon to do this sort of work.

At this time, the firm has 13 of its professionals certified to do IRA, seven of them being women.

While technically someone could be a full-time building inspector, those trained to do IRA tend to be architects and engineers and the inspections are typically just the first steps in major projects to be handled by their firms.

But the nature of the job, which never fails to draw a crowd on the street below, has made those who do it seem like a new kind of superhero.

One of CANY’s IRA-trained architects, Elyse Marks, often finds that after disengaging from her rope, passersby are waiting nearby to ask if she had just been climbing the building for fun. She always responds in the affirmative.

On a recent morning, Marks was doing one of her IRA inspections at a midtown hotel, swinging purposefully from floor to floor, along the building’s glass façade. (She made a point in doing this earlier in the day as the afternoon heat reflecting off the glass would have been too hot to work in for long.)

After completing her inspection of one of the building’s sides, Marks spoke with Real Estate Weekly about what it means to be a professionally building rappeler, or as it’s officially called, a “rope access technician.”

Marks has been trained to do IRA for the past seven years — and gets called on to do it pretty often.


The first time she inspected a building this way, she was dealing with a 12-story structure, one she’d now consider pretty small. Still, she recalled, “I freaked out. Being on a rope with nothing beneath you, I was terrified.”

Then came the next building, which was 65 stories. She soon found that being up in the air wasn’t too difficult, feeling that the workers who do the rigging, securing her ropes on rooftops, actually had a tougher job than she did. “I just get on, and it’s like, see you at the bottom,” said Marks. But then, certain properties can make her rethink this perspective. One building she inspected had more than 10 setbacks, which for her, meant having to climb on top of each one, all while lugging up to 200 pounds of rope that needed to be re-secured at each setback before climbing back onto the rope and going up further. Other times, she’s made her way onto a rooftop only to find walls so tall she has to vault over them.

Weather conditions can also complicate things. Along with high heat, when it’s very cold out, Marks must bundle up like anyone else, and the heavy gear can restrict her movements somewhat. She’s also had her hands go numb, making it harder to work.

It’s safe to say each job has its unique challenges and Marks admits to being a little nervous before each one. “I would say if you’re not worried, you’re not paying attention,” she said. “A healthy fear is good and if I’m not scared, I probably need to get checked.”

Whether the building is 10 or 70 stories, Marks never looks down. She also makes a point of not posting any photos of herself at work on social media until after a job is done, so she can give her mother a heads up about the really tall buildings she handles.

After one skyscraper inspection, for example, “I didn’t tell her until the next day,” said Marks. “She said, ‘I should know if my baby is scaling a building.’ I told her, ‘I knew you wouldn’t sleep.’”

Marks also said that while the number of women doing this in particular is growing, CANY, doing IRA since 2000, is still unusual for having so many female inspectors.

Her old firm, she recalled, did IRA, although there was only one female inspector when she left.

“When I started at CANY, there was a 50/50 mix,” said Marks. “When I walked into the interview, I found that refreshing.”

Still, Marks sometimes gets asked how her husband feels about her bird’s eye gigs. She actually met her husband, who’s also an architect, at her old firm, which does less in terms of IRA.

“He’s jealous of me because I get to do better buildings,” said Marks. She added that when she knows she’s going to end up in mid-air somewhere, “For me, it’s always the best day.”

According to Department of Buildings data, there were 247 rope access requests in 2018, up from 193 in 2015. This number is likely grow, especially as more buildings come due for their Local Law 11/98 façade inspections. Around 1,500 newly constructed buildings will need to be inspected between 2020-2025.