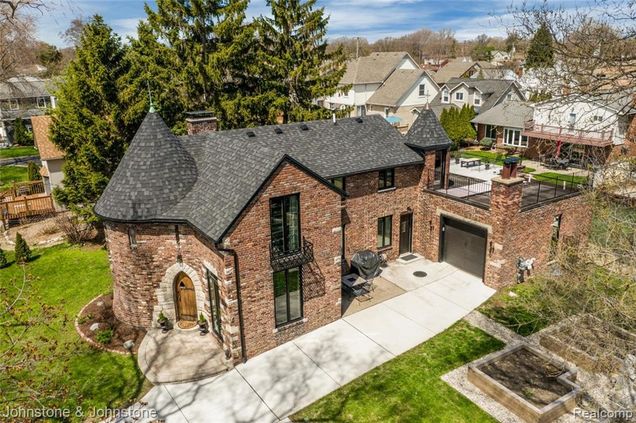 HAVE YOU HEARD? Patti Smith’s Realtor son is selling her ‘castle’

A one-of-a-kind home once owned by punk queen Patti Smith and her late husband, MC5 guitarist Fred Smith, is for sale.
The sellers have tapped Patti’s son, Realtor Jackson Smith, to list 22501 Beach Street in St. Clair Shores, Michigan (pictured top).
The Johnstone and Johnstone Realtors agent called the waterside home “castle like.”
The 2,116 s/f property sits on the Lake St. Clair canal in suburban Detroit and has a rooftop terrace overlooking the water.
Inside is a secret passageway behind a bookcase that leads to a wine cellar once thought to be used by rum runners during prohibition.
The current owners have restored the home on a grand scale while retaining restored vintage light fixtures and coffered ceilings.
During the time the Smiths owned the house, it was photographed by Annie Leibovitz and Steven Sebring and the Patti Smith documentary Dream of Life was filmed there.
A local legend, Patti Smith just played New York’s Webster Hall as part of a musical celebration to mark the re-opening of the historic venue.
The asking price for her old house is $499,000.

A STORIED HOME in the Hudson River village of Nyack is being offered for sale by Nancy Swaab at Ellis Sotheby’s International Realty for $1.795 million.
The four bedroom, three bath house sits on 1.4-acres at 159 River Road in Grand View-on-Hudson on the banks of the Hudson River.
It was originally built in 1916 for Titanic survivor Margaret Welles Swift of the Swift Meat Packing Company.
Known as Overledge, it has been home to a series of well-know residents over the years, including Santana drummer Michael Shrieve, Golf magazine editor George Peper and Alba Martinez, the brother-in-law of Dominican Republic dictator Rafael Trujillo, who reportedly it as a hideout.
The house has a formal living room with fireplace, dining room with fireplace, gourmet kitchen, butler’s pantry and several stone terraces and patios. The grounds include a Koi pond and direct access to the Hudson River.

Theater District takes a bow on Most Expensive homes list