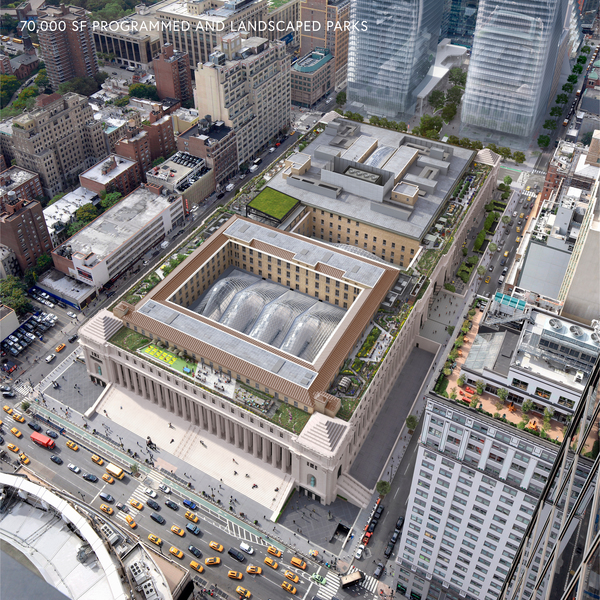 New York City’s office leasing market could be building up immunity to the COVID-19 pandemic, according to new office leasing reports issued this month.

Despite losing over 200,000 jobs to the virus since April, just 234,000 s/f of sublease space has been added to the market, according to a CBRE market report.

“Not only has then been no surge, there has been a decline in available sublease space,” said the report.

Since several tech giants – including Facebook, which was mulling a 700,000 s/f lease at the redeveloped Farley Post Office before the pandemic began – announced extended work-from-home policies as part of nationwide pause policies, the sector has been braced for a sucker punch from employers looking to reduce their physical office footprint.

According to CBRE analysts, the reason this hasn’t happened may be because many of the job losses are not expected to be permanent, and most employers expect to bring workers back, meaning they will continue to need their office space.

“Given the need for social distancing in the office, even firms that have reduced headcount are still uncertain how much space they’ll need to accommodate their workforce – and so they have not taken action to reduce their footprint (yet),” said the report.

“Additionally, most firms have avoided making any decisions about real estate in this moment of uncertainty, neither taking nor shedding space until they have more clarity on their needs and the future of their business. And, with space tours largely on hold at the moment, there is no rush to list space.”

Nicole LaRusso, director of research & analysis, CBRE Tri-State, said, “We see these huge unemployment numbers, and we think, ‘shed jobs, shed space.’ But, so far, there is not much sublease space coming to the market.  That seems really counter-intuitive, until we realize how unique this COVID-19 situation is, where a company could have fewer people, but at the same time need more space.”

Twitter told Real Estate Weekly today, “We do not have plans to close or shrink any offices.”

And, after initially saying the bulk of its workers would likely remain remote through the end of this year, a spokesman for Google told REW today it plans to start reopening its offices July 6, “assuming external conditions allow.”

In an email to workers, Google CEO Sundar Pichai, said the company would begin to scale up office operations in September.

“Moving ahead, we are looking to develop more overall flexibility in how we work. Our campuses are designed to enable collaboration and community—in fact, some of our greatest innovations were the result of chance encounters in the office—and it’s clear this is something many of us don’t want to lose,” said Pichai.

Across the city, major landlords are also preparing to reopen when New York City enters Phase 2 and storefront retailers and businesses in professional services, finance and insurance, administrative support, real-estate and rental-leasing industries will be allowed to open, tentatively set for June 22.

Brookfield Properties sent tenants of its 27.3M s/f of office space in the city “Return to Operations” plans several weeks ago.

“The health and safety of our tenants, visitors and staff continues to be our number one priority,” said a spokesman. “We have kept all properties safe and operational to accommodate our tenants’ essential workforces, and we are implementing comprehensive plans to ensure the safest possible working environment upon a broader return to operations.”

Empire State Realty Trust, whose portfolio includes 14 office properties, six standalone retail properties and the Empire State Building, is also ready to welcome tenants back. “While ESRT remained open and leasing activity continued throughout the pandemic, our focus now is to ensure that returning tenants and employees feel safe and protected as they get back to work,” said the company in a statement. “ESRT has set in place specific protocols to promote social distancing and protection from exposure.”

At the Durst Organization, spokesman Jordan Barowitz, said, “We have completed a tremendous amount of work in our buildings to promote social distancing and help stop the virus.  We have installed signage, put tape on lobby floors for queuing and egress, established maximum capacities in elevators, provided extra cleaning and sanitizing stations.   We are also working on new protocols for health screenings for all tenants and essential visitors and establishing personnel for contact tracing for our employees.”

CBRE said it expects the amount of sublease space coming to market will increase in the next few months as companies make determinations about who is coming back to the office, when, and how much space to allocate for each person.

Ruth Colp-Haber, a partner at Wharton properties who specializes in the sublease sector, is braced for a deluge.

She said, “Generally speaking, we expect a deluge of new sublet space to come on the market.  Companies are reeling from the economic impact of COVID-19 and are all reassessing their space needs now. In addition to layoffs due to decreased business activity, many employees will opt to work from home. Accordingly, we expect millions of square feet in available sublets to come on the market when there is a firm date for the Phase 2 re-opening of NYC.”

A report issued by Colliers on May office leasing found deal volume actually rose just over five percent on April’s numbers, helped by the 232,000 s/f lease by TikTok at Durst’s at One Five One tower in Times Square.

And despite large blocks of space added to available inventory at 1540 Broadway and 390 Park, Manhattan’s availability rate remained stable at 10.40 percent.

“Leasing volume could potentially continue to increase once New York City joins the rest of New York State in the phased reopening. “