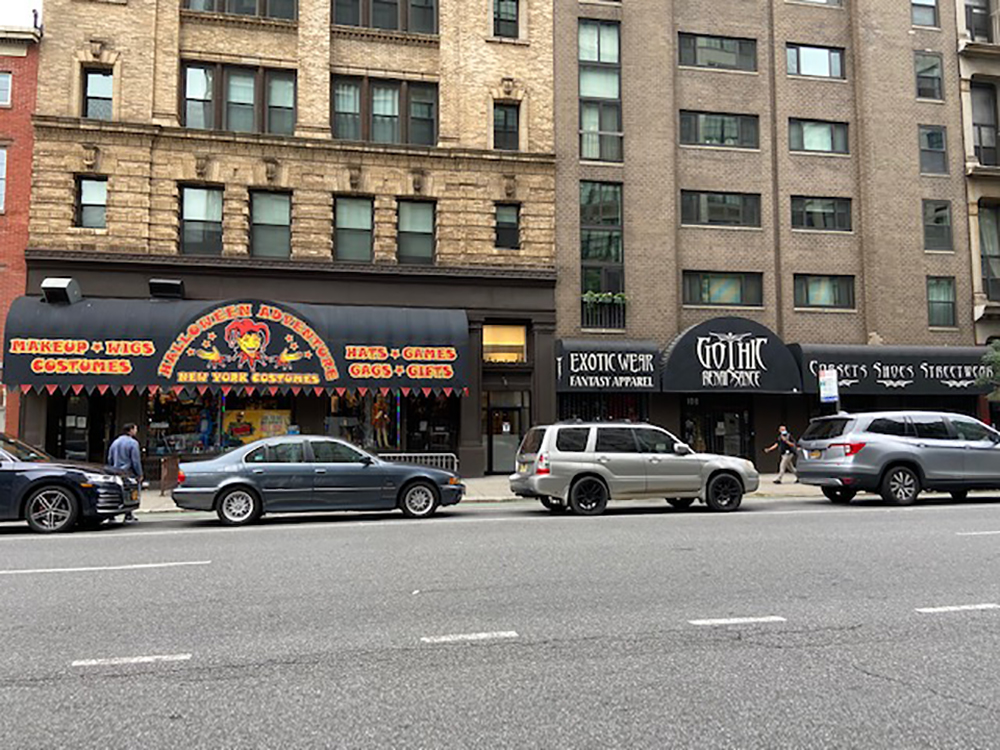 Adelaide Polsinelli is looking to work her magic on the Halloween store at 808 Broadway.

COVID has been the final nail in the coffin for Halloween Adventure in the East Village (pictured top), which has been the ghostly go-to for New Yorkers for two decades. With revelry cancelled, the local haunt has lost an estimated $2 million in sales and announced earlier this year that 2021 would be its last Halloween at the store.

The owners have tapped Polsinelli to sell their ground floor, block-through, retail condo that currently houses two floors jam-packed with costumes, props, masks and magic, confirming they will be spirited away when a new owner takes over.

“The pandemic dealt a major setback to New York City and the shift in retail shopping patterns to e-commerce, added a double blow to an already struggling retail market,” said Polsinelli, who nevertheless, sees a silver lining in the upheaval.

“We are finally seeing signs of a strong resurgence as more retailers commit to long-term positions,” she said. “This boost in activity is just what Manhattan needs to remind retailers and investors that we are in a once-in-a-cycle opportunity and, as we turn the corner on COVID, more businesses will be placing bets on real estate.”

Polsinelli expects the retail condo at the base of 808 Broadway, also known as 104-110 Fourth Avenue, is likely to cast a spell on a market rising from the ashes of COVID.

“It’s an exceptional opportunity,” she said of the unit. “With 80 ft. of frontage on Fourth Avenue and 40 ft. on Broadway, it’s ideal for multi-tenanted use as well as any combination of owner-user possibilities. The expansive size along with 16 ft. high ceilings, makes it suitable for not only retail, but also medical, educational and office uses.”

Located at the crossroads of Greenwich Village and the East Village, the property has entrances on both Avenues. Situated midblock, on Broadway between 11th and 12th Streets, its’ close to Washington Square Park, Union Square Park, the Greenmarket and the Union Square transit hub. Right at the center of NYU’s campus, it’s also near Beth Israel Medical Center and the new tech hub at 1 Union Square.

The building was constructed in 1887 with Gothic Revival detail by James Renwick Jr., who also designed the adjacent Grace Church and iconic St. Patrick’s Cathedral. The present seven-story, block-through building was converted to apartments in 1981 and renamed The Renwick, in honor of its architect.

Family owned and operated for over 65 years, New York Costume Halloween Adventure is the largest designer, manufacturer and distributor of Halloween costumes and accessories in the world. The company has two other locations in Pennsylvania.

As well as being a local landmark, the Broadway store is a star in its own right, appearing in movies Six Degrees of Separation and The Dummy and featuring as a backdrop in an episode of Unbreakable Kimmy Schmidt. In an episode of Friends, Joey pays a visit to the store during a search for a Christmas costume.

Polsinelli has listed to condo at $15.95 million.