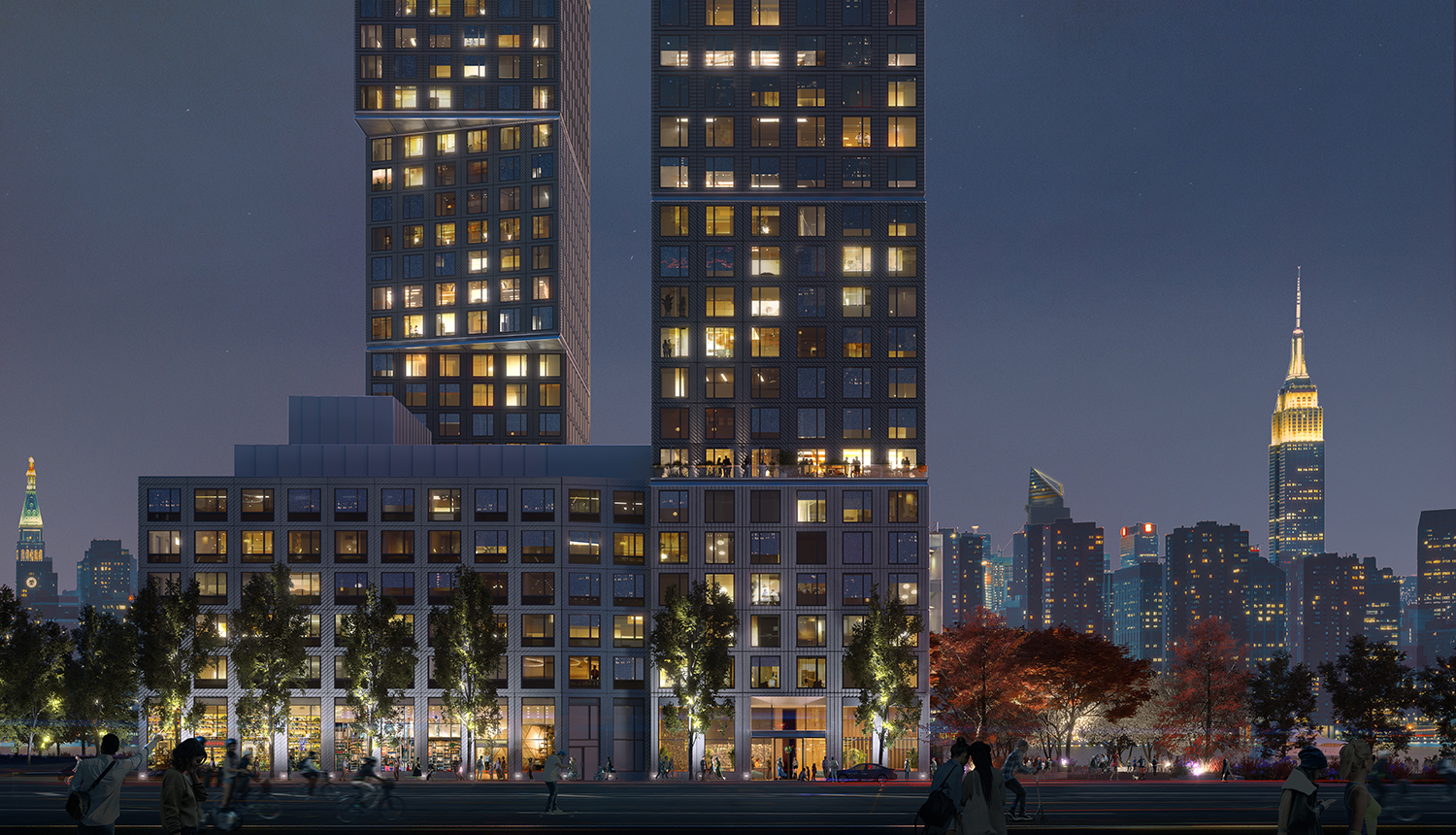 Together with an adjacent seven-story building, the two new towers will bring a total of 745 units of housing – 30 percent of which will be income-targeted through the Affordable New York program – and public open space to the neighborhood, expanding the existing esplanade and unlocking this section of Greenpoint waterfront for the first time in generations.

“Together with Park Tower Group, we are revitalizing an underutilized and neglected waterfront into a thriving section of the neighborhood through much-needed housing and public greenspace along Greenpoint’s breathtaking shoreline. We’re thrilled to break ground on our two new towers and bring new ground-floor retail and waterfront access to the community,” said Maria Masi, Senior Vice President, Multifamily Development at Brookfield Property Partners.

“This groundbreaking represents a major step forward towards realizing our vision for Greenpoint Landing. Between our new developments with Brookfield and extending our esplanade with world-class landscape design by James Corner Field Operations, Greenpoint Landing will provide the community with significant waterfront access and redefine the Brooklyn skyline,” said Marian Klein, President of Park Tower Group.

This next phase of development at Greenpoint Landing will add more than 40,000 square feet of new public green space to the existing public waterfront esplanade, creating a total of 2.5 acres of continuous public open space along the shoreline.

The new open space will focus on natural landscaping and expansive green spaces, creating a variety of experiences along the shore, including a lawn, picnic area, garden walk, and some salvaged maritime pieces found at the site.

The esplanade’s expansion will make Greenpoint’s waterfront more publicly accessible through a new pedestrian connection on Dupont Street and the extension of Eagle Street to the waterfront, completing the public esplanade from Eagle Street to Box Street Park.

The esplanade will be constructed by Brookfield Properties and Park Tower Group and donated back to the City so it can function as a public park in perpetuity. The esplanade is also adjacent to the newly reconstructed Newtown Barge Park newly built and operated by the City.

In fall 2017, the Waterfront Alliance announced it certified this first phase of Greenpoint Landing into its award-winning Waterfront Edge Design Guidelines (WEDG) program for excellence in waterfront design and resiliency.

In addition to mixed-income housing, the new towers will add 8,600 square feet of ground-floor retail to the neighborhood along Dupont Street and West Street. Brookfield is completing the last segment of West Street roadway and bike path in Greenpoint which will finally connect key existing commercial and residential corridors and activate the edge of the neighborhood.

“We’re excited to begin construction on what will be a new hinge point between Greenpoint and the waterfront. The two towers are flanked by smaller buildings – 7 stories at the corner and 3 stories at the water – to create a continuous yet shifting perimeter around the block. This variegated edge will extend Dupont and Eagle streets to bring activity and access to the East River,” said Jason Long, OMA Partner-in-Charge.

The towers’ facades feature precast concrete panels surrounding large, eight foot by eight foot windows. Like the buildings’ forms, the precast panels are carved by a series of angled planes. Oriented differently for each block – vertical, horizontal or diagonal – the carved faces react dynamically to the movement of the sun throughout the day. Marmol Radziner is the interior designer and landscape designer for the buildings and Beyer Blinder Belle is the executive architect and unit interior designer.

In a joint venture with master developer Park Tower Group, Brookfield is developing a total of 2,000 units across four development sites at Greenpoint Landing. The first building, One Blue Slip, opened in August 2018, along with 1.5 acres of public waterfront open space. One Blue Slip features 359 units, 90% of which have views of the East River and Manhattan skyline. The building includes amenities designed by Gachot Studios, providing residents with curated, thoughtfully designed indoor and outdoor spaces to relax, socialize, share meals, work, exercise, and more with views of the Manhattan skyline. A second building, Two Blue Slip, will open in January 2020.

Greenpoint Landing is a 22-acre site situated along a half-mile of East River waterfront, being developed by Park Tower Group. In 2005, the City of New York designated the site for residential use under the Greenpoint-Williamsburg rezoning. In its entirety, Greenpoint Landing will include an estimated 5,500 residential units – 1,400 of which are affordable housing – as well as a new pre-k through 8th grade public school and four acres of public open space.