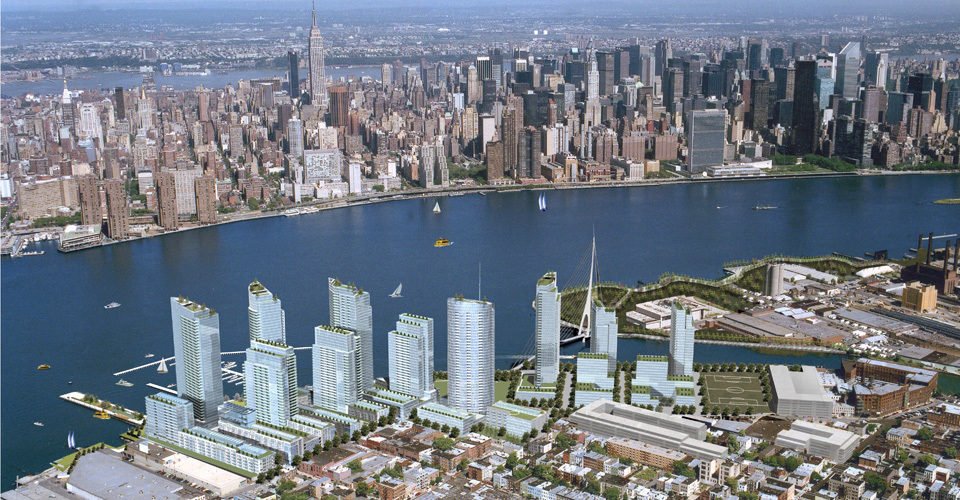 Greenpoint braced to step out of shadow of its popular neighbor

Like many neighborhoods in New York City, Brooklyn’s Greenpoint is an intersection of old and new.
But what makes the North Brooklyn nabe different is its possible future as the next boom neighborhood, based on its waterfront location, just north of Williamsburg.

In December, part of a plan to build a series of high-rise towers on the Greenpoint waterfront was given the go-ahead by the City Council, paving the way for the project to begin.

The 30-40 story towers would contain more than 5,000 residential units, some of which will be affordable, while another project, 77 Commercial Street, developed by the Chetrit Group, will have 720 units and also be 30-40 stories.

Despite some public outcry over the projects by Greenpoint residents, one thing that both developers and residents cannot deny is the need for more housing.

“It’s a very, very tight market,” said Evan Church, a Corcoran agent who works in Williamsburg and Greenpoint. “It’s the lowest it has been in Brooklyn in the last five years.”

The northernmost neighborhood in Brooklyn, which for many years has been predominantly a working-class neighborhood of Polish immigrants, has seen many young people moving in after its neighbor to the south, Williamsburg, began to get too pricey for some.

“It’s changed and it hasn’t. It’s still a close-knit tight community,” said Church, who has worked in the area for the past 10 years. “With all the spillover from Williamsburg and Long Island City recently, it’s really started to see a lot of change.”

Church noted that more and more trendy bars, restaurants and retail have been popping up in the past few years.
“You have all this spillover from Williamsburg, which has become such a hotspot, that it’s almost like going over to Greenpoint is like moving to the suburbs,” he said.

And the housing stock in Greenpoint compared to Williamsburg matches that idea — traditionally, Greenpoint has mostly low-rise, one-to-three family homes, and much less new development.

“We’re involved with two clients who are selling their homes in Williamsburg and moving to Greenpoint,” said Church. “They’re looking for a more residential community.”

Julia Segal, an agent in the Greenpoint office of Miron Properties, has lived in the neighborhood for several years.
“Greenpoint’s been popular for a while. It used to be where you’d go when you couldn’t afford Williamsburg,” she said. “Now it’s a destination place, where some people want to only look at Greenpoint.”

The main character in popular HBO show “Girls” lives in Greenpoint, which Segal says may have helped spark interest in the area.

“I definitely think it added curiosity to the neighborhood,” she said. “Anything filmed in a New York City neighborhood adds to the curiosity about it. I think it helped make Greenpoint more accessible in the minds of people who would never think to come this way.”

Though she noted that average rents change from place to place and with the seasons, she estimates average rental prices for shares — two or three bedroom apartments — run $1,200 to $1,400 per room, and even more if it’s a luxury or high-end apartment.

One bedroom and studio apartments are rarer in the neighborhood due to the architecture of the area. Four-room railroad apartments, which include one bedroom plus an office, are more popular.

Median condo prices in the neighborhood for a one bedroom apartment are $799,000, while two bedrooms are $925,000 and three bedrooms are $1.85 million, according to Streeteasy.

One major issue that is always brought up when comparing Greenpoint to Williamsburg and other close neighborhoods is transportation. The G train, the only north-south train that travels between Brooklyn and Queens, is a constant source of scrutiny and frustration for many residents that have to commute to Manhattan for work.

“You do only have the G train, but the proximity to places like Queens and Williamsburg is great, depending on what your needs are,” said Segal.

Transportation alternatives like the East River Ferry, which stops along the Greenpoint waterfront, and buses, have somewhat eased transit headaches.

“The neighborhood is always growing, money is coming and places are opening up,” said Segal. “You have the feeling of people wanting to stay where they are. People enjoy it for what it has to offer and I think that makes it really great.”