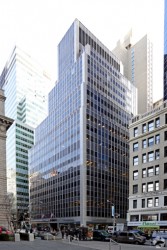 In a series of separate transactions, four companies have signed leases and renewals at the Rudin Family’s One Whitehall Street.

The organization has been housed in the space since 2008, and its new lease will extend until 2028.
Also signing is Selligent, a global digital marketing agency, which has taken a 10-year, 11,323 s/f space on the entire 19th floor. The company is currently located at 115 West 27th Street and expects to move into the building in the 1st quarter of 2017.

Architizer, a technology company that hosts one of the largest databases of architecture information on the web, is growing and expanding within the building. The company, which was previously sharing office space with architecture firm Hollwich Kushner on the 14th floor, has taken a 7,356 s/f pre-built space on a portion of the 10th floor for an eight-year term.

And lastly, Premier Home Health Care Services, an agency specializing in home community-based long-term and certified home health care, has leased a 7,601 s/f pre-built space on a portion of the 2nd floor.
With this new lease, Premier will have three locations in Lower Manhattan. The company is headquartered in White Plains, NY and has various offices in New York, New Jersey, Connecticut, Massachusetts, North Carolina, Illinois and Florida.

The new deals come on the heels of the Regional Plan Association’s (RPA) announcement to relocate to the building. The not-for-profit organization which is currently situated in the Union Square area, is taking 9,135 s/f on a portion of the 16th floor. RPA is expected to move to the building during the first quarter of next year.

According to Bill Rudin, Co-Vice Chairman and CEO of Rudin Management Company, the operating arm of the Rudin Family holdings, the flurry of leasing activity at One Whitehall Street is being driven by the building’s Downtown location, which is situated in close proximity to multiple subway lines, Battery Park, Fulton Center, the World Trade Center PATH hub and the Staten Island Ferry.

“Our building at One Whitehall Street has been extremely well-received by a diverse roster of tenants ranging from technology, media, non-profit, professional services and more,” he said.

“It’s a microcosm of Downtown’s economy, a neighborhood that is defined by a dynamic workforce, a resurgent office market, a growing population and great access to transportation. We are firm believers that our building and Lower Manhattan will remain strong and continue to attract high-growth companies.”