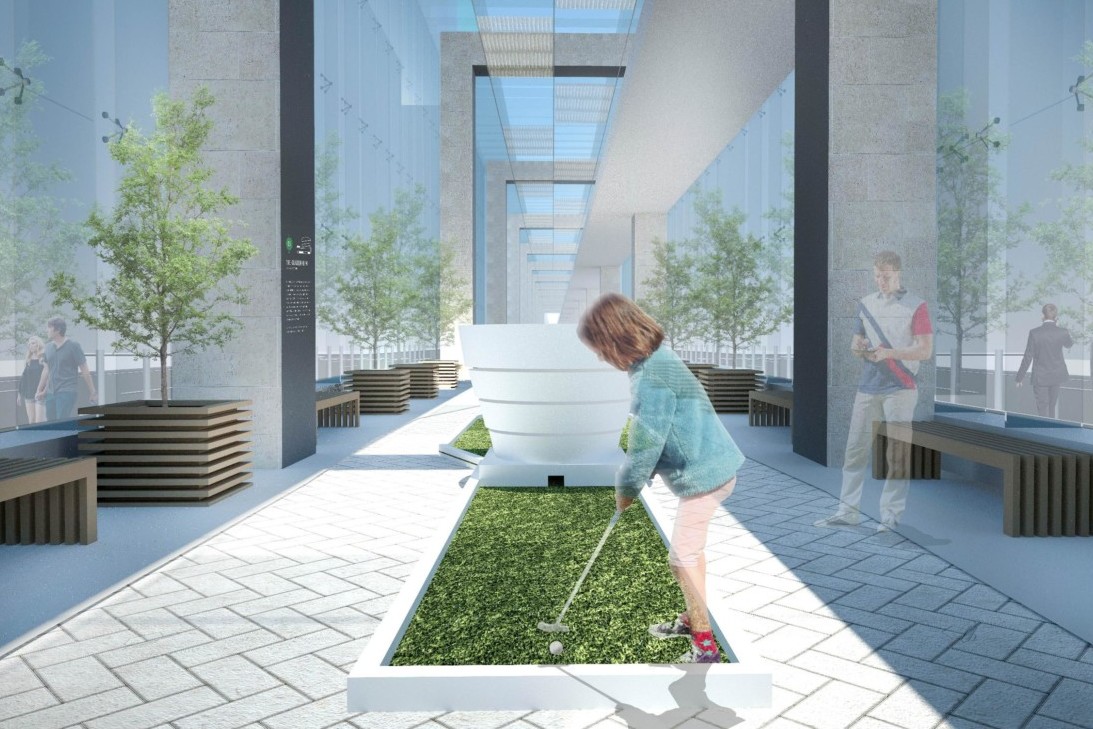 Fisher Brothers is showing off proposals for a mini-golf course and giant aquarium along the Park Avenue median.

The company just announced the finalists in a competition they sponsored  to find out-of-the-box ideas to transform an 11-block stretch of Park  – and 17 finalists have not failed to disappoint in terms of creativity.

As well as the golf course and aquarium, the proposals for the center medians include an Alpine mountain range, amusement arcade and even a kayaking course.

“We are overwhelmed by the response – with nearly 150 submissions received from artists, architects, landscape architects, urban planners, and students – and blown away by the level of thought, creativity and attention to detail that went into the bold designs and sophisticated renderings,” said Winston Fisher, a partner at Fisher Brothers which sponsored the competition to re-envision the traditional traffic medians of the Park Avenue commercial district between 46th and 57th Streets.

“While Park Avenue, with its median plantings and periodic art installations, remains one of the world’s most iconic commercial boulevards, I have long believed that we can and must be far more imaginative in how we encounter and utilize such a precious urban commodity.

“Our hope is that this contest and these proposals will spark a real conversation about what can be done to activate Park Avenue’s centerline for a new generation of New Yorkers.”

The “Beyond the Centerline,” competition encouraged participants to treat the Park Avenue centerline as a blank canvas and to submit their most ambitious and creative visions unencumbered by zoning code, cost, weight limit, or other restrictions.

The entries offered an array of innovative designs that incorporate not only the existing medians, but often the spaces above, below and all around.

In addition to recreating Park Avenue with such urban amenities as seating areas, lush landscaping, pocket parks, walking paths, and food and beverage options, the various finalists also conjured visions of a future Park Avenue adorned with such curiosities as an aquarium, an Alpine mountain, a botanical circus, a forest, a wandering river, a subterranean arcade, 30-foot tall field stalks, living walls, floating gardens, and even a Mimosa Pudica plant whose leaves open and close to the rhythm of the trains operating underneath.

A jury of eight esteemed professionals assembled by Fisher Brothers narrowed the field down to 17 finalists. These top designs will be displayed in the public arcade of Park Avenue Plaza from March 5 through March 9.

Two winners will be announced by Fisher Brothers on March 13. In addition to a $25,000 grand prize winner selected by the jury, Fisher Brothers plans to award a $5,000 prize to the winner of a popular vote.