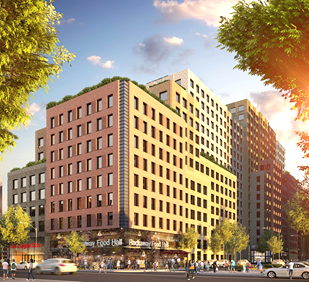 The plan will reactivate the site of the former Peninsula Hospital and serve as an anchor of economic growth for the Edgemere neighborhood in Far Rockaway.

Edgemere Commons will create 2,050 units of mixed-income affordable housing for the Rockaway community and include approximately 150,000 square feet of commercial and community facility spaces.

The project is expected to bring in a new supermarket, Western Beef, to the neighborhood and dedicate 72,000 s/f to local and national retailers, restaurants and coffee shops.

Edgemere Commons will also create a total of 38,000 s/f of public open space including a children’s playground and a public plaza that will allow for special events, regular programming and community engagement.

In an area where the median family income is the lowest on the Rockaway peninsula, the affordable levels of this development will offer support to local residents.

Edgemere Commons will create 2,050 units with diverse income bands ranging from 30-130 percent AMI as a way to anchor economic growth. A total of 270 of the affordable housing units will be dedicated to seniors.

“From the start, we wanted a project that had the best interests of the community at its heart. Edgemere Commons will not only help to rebuild the Rockaway Peninsula but will also revitalize the neighborhood and bring in a new era of economic growth,” said Daniel Moritz, Principal at Arker Companies.

“We are pleased to have the support of the City Council and Council Member Richards in particular, as we begin construction on a plan that will reinvigorate Edgemere and start a new chapter in its history.”

“Our Master Plan for the development of Edgemere Commons is the result of years of collaboration between the Far Rockaway community-at-large and a group of the regions foremost experts in the fields of design and construction,” said Ariel Aufgang, Principal of Aufgang Architects. “We are excited to move forward with this project to get scores of families out of substandard housing and into this dynamic mixed-use project.”

Arker will launch a $2 million Community Benefits and Youth Development fund and build a community center in Edgemere Commons, which is expected to spur economic development in the struggling neighborhood, bringing in $1.486 billion in growth and creating 300-350 annual construction jobs as well as 650 permanent jobs.

The Arker Companies have committed to a local hiring goal of 35 and 30 percent MWBE for subcontractors to ensure local residents and minority owned businesses benefit from this investment in their community.

Western Beef will be the anchor tenant of the development, with a 20,000 s/f supermarket along Beach Channel Drive as part of the project’s first phase.

The project also calls for the creation of a new street network and will feature resiliency and storm preparedness measures including bioswales, bioretention rainwater system solar panels, green and gray water infrastructure and extended tree pits. Standby generators will be included in all buildings with emergency outlets in each unit.

Edgemere Commons will be built in five phases and construction is slated to begin in 2020.The development includes 11 buildings with an expected completion date of 2034.