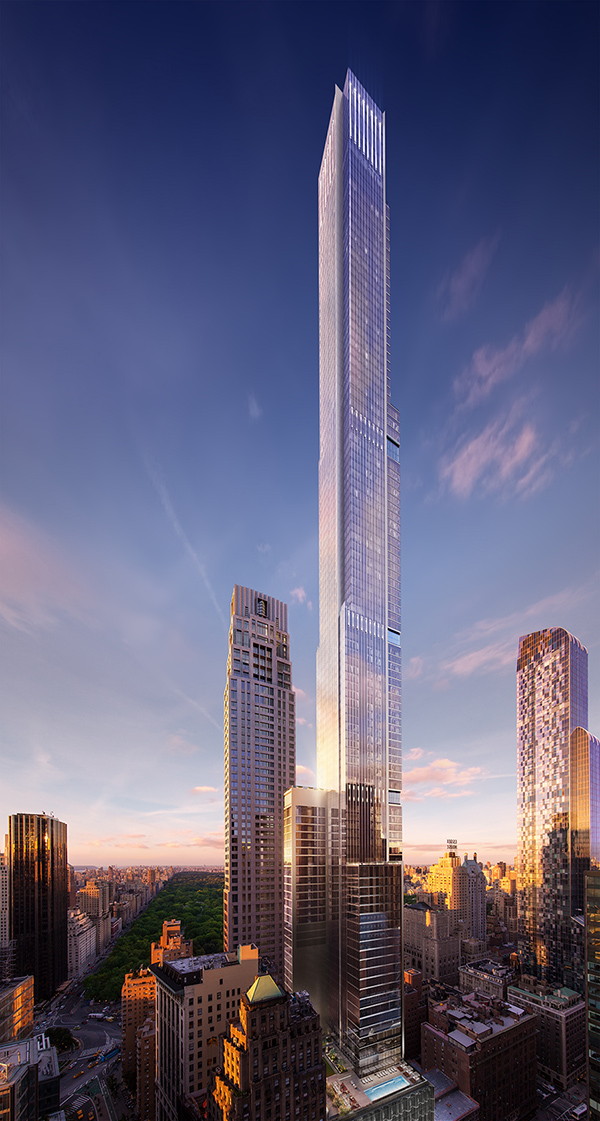 Extell Development Company’s new skyscraper Central Park Tower has topped out and at 1,550 feet high, it will be the tallest residential building in the world.

Designed by Adrian Smith + Gordon Gill Architecture (AS+GG), the building features a facade made up of glass and satin-finished stainless steel, and the structure cantilevers to the east at a height of 300 feet, creating Central Park views for all north-facing residences.

It’s located on West 57th Street, along the corridor known as “Billionaire’s Row,” where Extell also developed the first supertall condominium, One57.

“Central Park Tower is the pinnacle of development in New York and around the world,” said Gary Barnett, founder and chairman of Extell Development Company. “We would not be able to offer this level of design, quality and service without the contributions from the world’s most talented architects, engineers and designers.”

The residential interiors are designed by Rottet Studio, whose projects include the St. Regis Hotel in Aspen and the Loews Regency Hotel in New York. The building has 179 two-to-eight-bedroom residences that begin on the 32nd floor of the building and range in size from 1,435 s/f to over 17,500 s/f. The building will have its own club, Central Park Club, which will occupy three floors, and Nordstrom’s will be at the base of the building, occupying 300,000 s/f throughout seven floors.

This is Nordstrom’s largest single-project investment in its over 100-year history, Extell said, adding that the department store will open to the public on October 24.

Extell’s partners co-developing Central Park Tower are SMI USA (SMI), the US subsidiary of Shanghai Municipal Investment, which developed the Shanghai Tower, the second tallest building in the world, and Lendlease. Lendlease served as construction manager for Central Park Tower.

First closings are slated for 2020 and pricing for the smallest available homes (two bedroom, 2-bath units) starts at $6.9 million. The largest units currently on the market are five-bedroom, 5-bath units priced at $63 million.