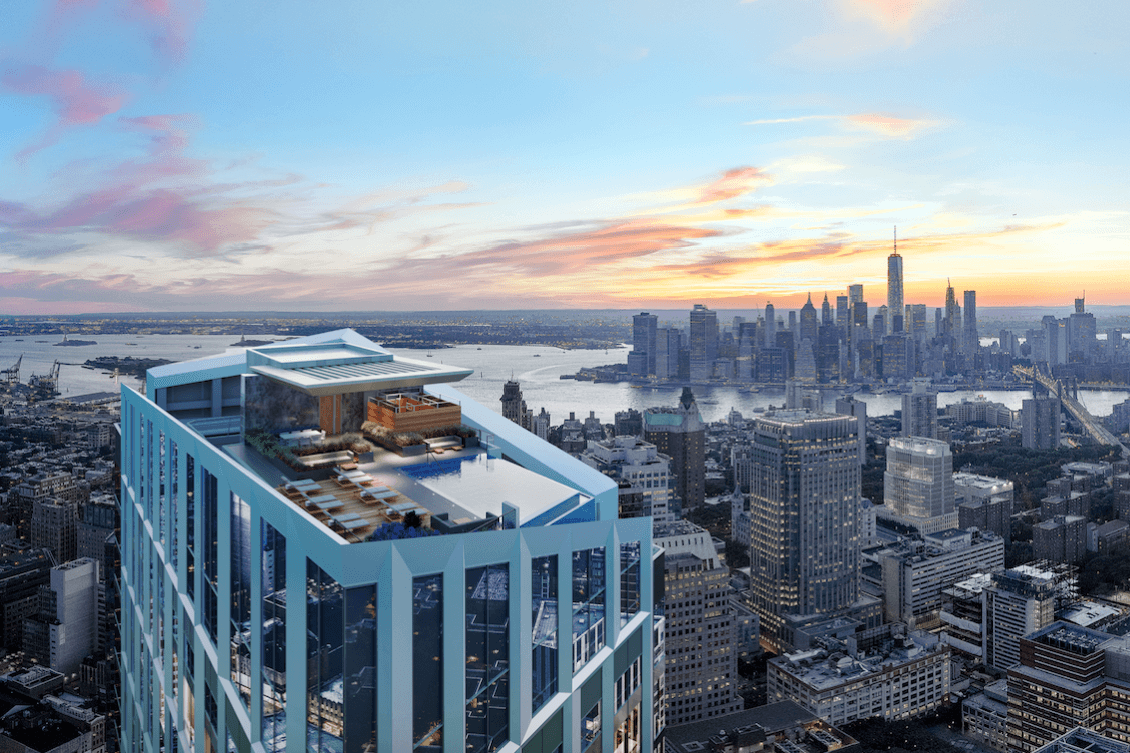 Extell proves to be view master with cloudbuster Brooklyn condo

Condo buyers at Brooklyn Point, Extell Development’s first project in Brooklyn, will be in rare air once the project is move-in ready sometime in mid-2020.

At 720 feet, the building is poised to be the tallest in the borough with the highest residential infinity pool in the Western Hemisphere.

But, should those breathtaking views leave residents short on oxygen, the tower’s 25-year tax abatement might just help them breathe a bit easier.

With 30 of the project’s 68 stories completed—and more arriving on a near-weekly basis—Extell invited Real Estate Weekly to tour the construction site and see the views, which are impressive despite the building being less than halfway to topping out.

Located off of Flatbush Avenue between the MetroTech and LIU-Brooklyn campuses, Brooklyn Point, also known as 138 Willoughby Street, is in the heart of Brooklyn’s revitalized Downtown corridor. 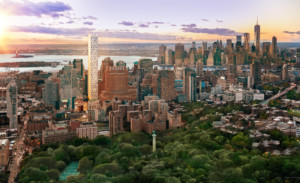 Directly next to the property is the City Point complex, home to Target, Century 21, Alamo Drafthouse and the DeKalb Market, a subterranean food hall with 40 vendors, including local favorites such as Katz’s Deli, Ample Hills Creamery and Steve’s Key Lime, as well as a Trader Joe’s grocery store. Another Brooklyn staple, Junior’s Cheesecake, is right around the corner.

Nearby Fulton Avenue is home to several factory outlets and other retailers as well as a handful of cultural attraction, such as the Brooklyn Academy of Music.

All told, 11 subway lines converge in the area immediately surrounding the development. The DeKalb Avenue station, home to the B, D, N, Q and R lines, has an on-site entrance below City Point.

“The neighborhood has everything you could want all within a few-block radius,” Extell sales associate Timothy Rizzo said.

Unlike most 20-year tax-abatements, which begin to sunset after a dozen years, Ari Goldstein, Extell’s senior vice president for development, said Brooklyn Point will be tax-exempt for 21 years before a four-year phase-out. 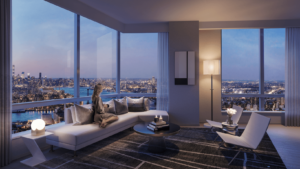 Most of the 458 units cost less than $3 million, making them relatively affordable in the grand scheme of New York luxury housing.

Designed by Kohn Pedersen Fox, the firm behind 10 Hudson Yards, Brooklyn Point will feature a predominantly glass exterior, with double-height window frames, which will be white as an homage to the white-brick buildings constructed on Manhattan’s Upper East Side in the 1950s and 60s, Rizzo said.

Units will be offered in either a light or a dark pallet, depending on which floor they’re on, with 5-inch-wide stained oak floors and matching millwork. Like Extell boss Gary Barnett, this is Newman’s first Brooklyn project.

Lendlease is the general contractor on the project, which, at the time of publication, stood at 32 stories tall. Ceiling heights will be between 9 and 11 feet tall and the structure is being outfitted with 9-inch-thick floor slabs, instead of the 6-inch minimum required by the city’s building code, for extra sound insulation.

Goldstein said the project is ahead of schedule and on track for completion in 2020. 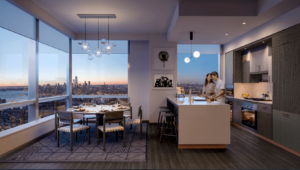 “The fact that we’re ahead of schedule is particularly impressive and it speaks to the quality of work Extell and LendLease have become known for over the years,” Goldstein said. “If this were another developer with another contractor, I don’t think we’d be this far along.”

The building also will include an impressive array of amenities, spanning 40,000 s/f throughout multiple floors. They include two pools—the rooftop infinity and a 65-foot indoor saltwater option—a basketball/squash court, a 35-foot indoor climbing wall, a wrap-around terrace, a demonstration kitchen and various other features that have become standard in the city’s premier luxury residences, such as a fitness center, package delivery room and bike storage.

On the seventh floor, home to the wrap around terrace and resident lounge, residents will have a view of Willoughby Square Park, a one-acre greenspace under construction at the corner of Willoughby and Albee Square West.

Goldstein said having the park directly across the street is one of the key advantages that will protect much of the building’s higher-floor sightlines for the foreseeable future. The site also benefits from the double-wide boulevard on Flatbush Avenue and a low-rise rooftop greenspace next door at City Point.

“We’re not hemmed in here,” he said. “A lot of projects in the Financial District and other parts of the city don’t do as

good of a job protecting views.”

From the 26th floor, northern sightlines include the Manhattan and Williamsburg Bridges, the Empire State Building and Extell’s other ongoing high-rise project, One Manhattan Square. The east side offered a vista of Fort Greene Park and its surrounding low-rise neighborhoods.

Unfortunately for Extell, however, they might not hold the title of Brooklyn’s tallest building for long. JDS Development and the Chetrit Group are working on 9 DeKalb, which will rise 1,066 feet above the Brooklyn Dime Savings Bank, around the block from Brooklyn Point.

Competition aside, Goldstein said Extell is confident in its product and already has seen strong sales, although the company declined to release any specifics.

Thus far, interest has been equally divided among the four apartment sizes, which range from $837,000 to roughly $4 million, Goldstein said, with many prospective buyers coming from Brownstone Brooklyn, Dumbo, Tribeca and elsewhere in Lower Manhattan. Some have even hopped over from nearby Downtown rentals.

“I feel extremely good about this building because there’s nothing like it in this location, with this kind of retail access and a 25-year tax abatement,” Goldstein said. “The market is about supply and the demand there isn’t going to be any more supply like this in this area.”