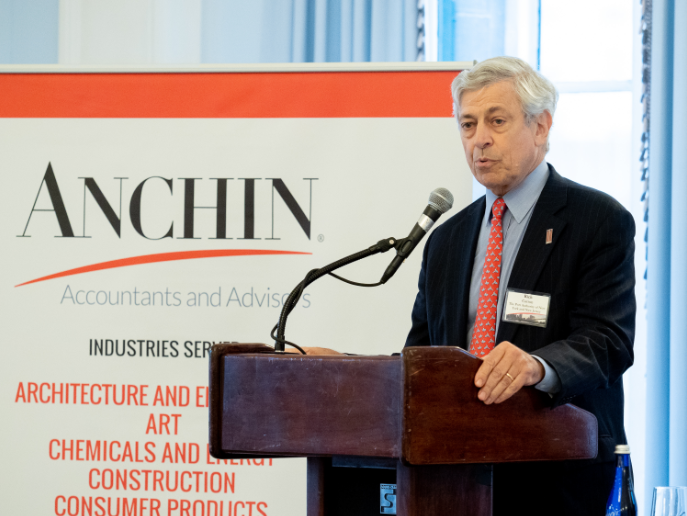 Industry experts say public-private partnerships are the key to New York City infrastructure investment.
During Anchin’s 13th annual State of the Construction Industry event, several experts warned that it would be a mistake to put off planning major projects.

“We need to think about the public infrastructure and these projects can take 10 years or longer sometimes between planning and getting funding,” said John Porcari, president of WSP’s US Advisory Services.
“I argue that we need to balance, accelerate and sustain this boom in construction by making sure that we’re keeping up on the infrastructure side.”

Porcari was joined by Dominick Servedio, executive chairman of the STV Group, Polly Trottenberg, the city’s Department of Transportation commissioner, and Palmina Whelan, America Airline’s managing director of real estate and facilities for the discussion.

With construction in the city booming, Servedio said he believed a downturn is still several years away.
He noted, “This boom is a little different and it’s probably the longest running one, I still think it has a few years to go, but what makes it different is that it’s more dispersed with more construction in the outer boroughs, not just Manhattan.”

But even with a healthy construction pipeline, Porcari said New York is failing to maintain the necessary public infrastructure that keeps residents and workers going where they need to be.

Trottenberg said the city is open to public-private partnerships (P3) in figuring out how to repair the complex triple-cantilever stretch of the Brooklyn-Queens Expressway in Brooklyn Heights.

Rick Cotton, the executive director of the Port Authority of New York and New Jersey and the keynote speaker at Anchin’s conference, said big government agencies tend to be “inward-looking, slow-moving and somewhere between hard and impossible to work with.”

But he added that there are crucial infrastructure projects that need to be done, even with the help of the private industry.

While private sectors sometimes fund the projects, Cotton stressed that the partnership projects would still have to be done at the level of quality the public demands.

“One thing I’ve learned in terms of the experience is that the public sector cannot relinquish its responsibility to set high standards, to monitor those standards and enforce those standards,” Cotton said.

The gatehring heard that, after being stalled for several years, two of the city’s biggest infrastructure projects could benefit from public-private partnerships.

The Gateway tunnel Program is still trying to secure federal funding. The $13 billion project aims to restore the current century-old two-track setup running under the Hudson River and double its capacity after its deteriorating state was exacerbated by Hurricane Sandy.

“Think of it as the most urgent infrastructure project in America,” said Porcari, who is also the interim executive director of the Gateway Project. “It’s a single point of failure for 10 percent of America’s GDP.”
Last month, the Gateway Development Corporation hired Ernst & Young as a financial adviser. The company will be retained for three years to complete financial analysis and modeling, develop procurement criteria and identify funding sources.

Similarly, another transportaton project is facing difficulties after its head honcho left his post. The Brooklyn Queens Connector, better known as the BQX, is a proposed streetcar project to better connect the two boroughs. Its initial plans were ambitious as it would take more than a decade to build and needs $1.3 billion of federal funding that is yet to be secured.

On October 5, the director of the BQX Adam Giambrone left his post after two years on the job. Giambrone, who was previously responsible for Toronto’s streetcar network, said he would look for transit work back in Canada.

The future for those and otehr infrastructure projects may come down to public-private partnerships.

For the BQE triple cantilever, Trottenberg said there’s two major issues having to do with the complexity of the design and that stretch of the highway taking on more traffic than it was originally intended for.

Porcari said public-private partnership helps both sides as the private side gets work and the public sector reduces the risk of pursuing a major project because of the increased odds it’ll get finished.

“It would be great if we had more public funding at the federal level, but a public-private partnership, above all, helps you complete a project by delegating the risk as it’s much more successful to deliver a project,” Porcari said. “That is truly the benefit of the partnership.”

And as the construction boom continues, Servedio said it’s important to find the right model of public-private partnership to capitalize before the market hits a downturn.

“I look at private public partnerships as a way of financing infrastructure improvements,” Servedio said. “Partnering is the most important thing right now for New York. Let’s get projects done cheaper and quicker, without sacrificing quality.”

Another high-level departure at Colliers as Brennan exits for CBRE