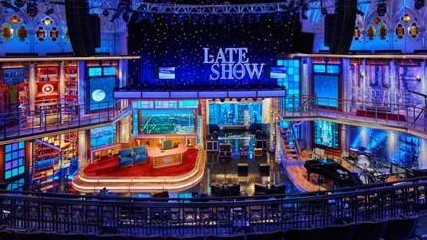 Colbert greets celebrities, actors, politicians and other notable figures in the theater as host of the new Late Show.

CBS, which owns and produces the Late Show, had the theater renovated to Colbert’s specification as part of the preparation for the new show.

The renovations, which occurred on the 11th, 12th, 13th and 14th floors of the building, included the green rooms on the stage, cellar green rooms and make up areas, as well as full fire alarm upgrades, telephone and data infrastructure upgrades, and audiovisual and security support.

An additional challenge was presented by the aggressive scheduling requirements of the project.