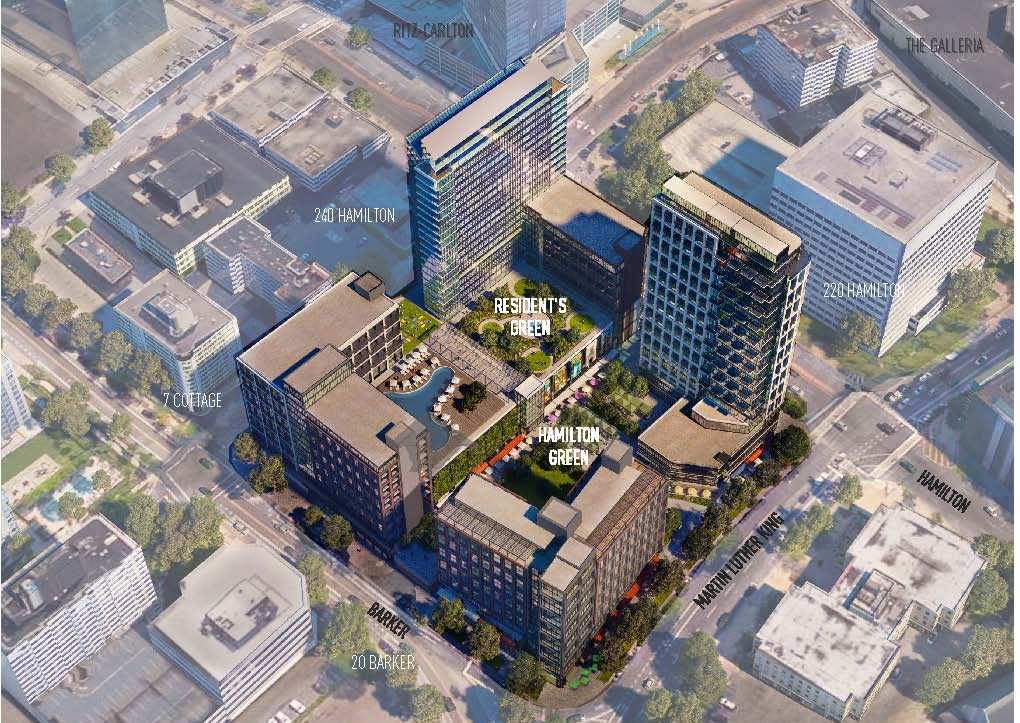 Developers land $33M in incentives to build in Westchester

The three projects would create more than 3,000 construction jobs and over 500 full- and part-time jobs. They would also add more than 1,800 residential units to the city’s booming rental market.

“These three major projects, which represent over a billion dollars in private investment, will continue to build on the tremendous growth under way in Downtown White Plains as well as boost economic development and job creation in Westchester County,” said Bridget Gibbons, Director of the Westchester County Office of Economic Development.

The project is comprised of four residential buildings totaling approximately 860 units, of which 10% will be affordable to 80% AMI. In addition, there will be 85,400 s/f ofretail and restaurant space, approximately 27,000 s/f of co-working office space and a 956-space parking garage. Hamilton Green will feature a 67,000 s/f elevated public outdoor space, nearly an acre in size, which will be accessible from Martin Luther King Boulevard and Hamilton Avenue. The privately-operated public space will incorporate street-level retail and sidewalk cafes.

Approximately 1,437 construction and 500 full- and part-time jobs are expected to be created over the lifetime of the project.

In the second project, Lennar Multifamily Company received preliminary approval for $12.15 million in sales tax and mortgage recording tax exemptions for a $500 million mixed-use development at the site of the former Westchester Pavilion at 60 South Broadway.

The project, which will be built over two phases, will be comprised of 814 apartments in two towers including 50 units affordable to 60 percent AMI, 28,056 s/f of ground-level retail space and restaurants with 932 parking spaces. Construction of the first phase is expected June 2020, with occupancy in September 2022. The second phase will begin construction in June 2022, with occupancy in September 2024. The two phases are expected to create between 600 and 700 construction jobs and 20 permanent jobs.

Called Waterstone, the $115 million development will be targeted to active seniors and provide private accommodations and a wide range of services and amenities, including support services and social and cultural programs. The developer is constructing structured parking within the proposed building as well as a four-story parking garage on an adjacent property.

The developer is creating a 13,000 s/f park ; providing temporary parking off-site during construction, including pedestrian safety improvements; and making $1.2 million donation to the White Plains Affordable Housing Fund to promote affordable housing opportunities in the City and to satisfy any affordable housing obligation.

The development is projected to create 1,250 construction jobs and 48 full- and part-time jobs over the life of the project. Construction is expected to take 22 months.