In addition, at 1800 American Blvd., Janssen Research and Development, a subsidiary of Johnson and Johnson, leased 39,000 s/f, and CENLAR leased an additional 28,000 s/f. 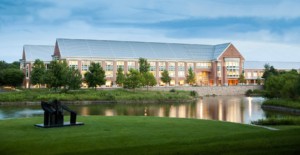 Ed DaCosta of CBRE represented Janssen in the transaction. CENLAR was represented by Steve Tolkach of Newmark Grubb Knight Frank. With the completion of these three leases, Princeton Place at Hopewell (1700, 1750 and 1800 American Blvd) is now 95 percent leased.

“We are pleased with the execution of our leasing strategy and delighted with the performance of our management and leasing teams,” said Michael Gribbon, principal and executive managing director of American Real Estate Partners.

“The hard work and professionalism of Paul Giannone, Kevin Carton and Todd Elfand of Cushman & Wakefield was instrumental in our success. Our ability to attract such strong corporate tenants to our campus on long term commitments speaks to the quality of the real estate and team.”

The Cushman & Wakefield marketing team has been working Princeton Place since mid-2014, when an affiliate of American Real Estate Partners purchased the property.